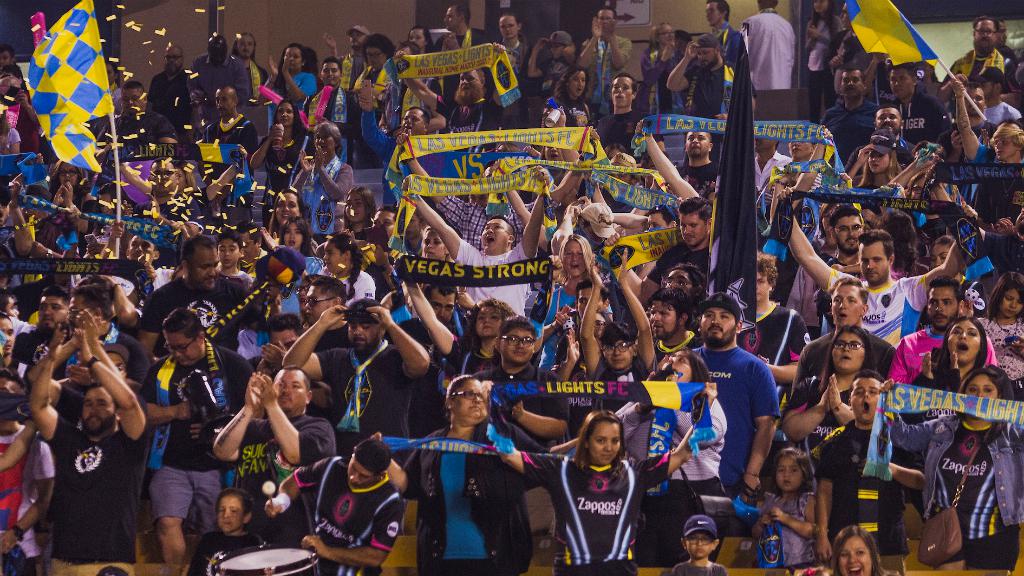 LAS VEGAS — For the first time in its short history, Las Vegas Lights FC will feature in the USL Game of the Week on Friday night (11 p.m ET | Match Center | ESPN3). That prospect has Lights FC ready to continue a proud Las Vegas tradition of entertaining the people.

"For us, if you analyze professional football, its core business is entertainment. If we are on national TV, we are putting on a show, a spectacle that many people will watch,” said Lights FC Head Coach Isidro Sanchez. “We are making the same effort, training the same as always, but the result, more people will see it. I like playing high-limit bets. I prefer it. If we win, we will win a lot."

The national TV stage that ESPN3 provides has not just Sanchez excited but also the club's players, all of whom are looking forward to exposing the whole country to Lights FC soccer.

"We’ve won and tied games, but we believe that we can be even better on the field because of the quality of our players and because of the work we’ve done,” said Lights FC captain Joel Huiqui. “Friday is the day we can do it and show the nation what Las Vegas Lights is about."

Friday night's game against San Antonio FC kicks off a big weekend for Lights FC, which will also serve as the visitor for the opening of Real Monarchs SLC’s Zions Bank Stadium on Monday night (9 p.m. ET | Match Center | ESPN+). But that’s the way Sanchez likes it, a quick turn-around with little time for players to settle requires full commitment for the whole week.

“We feel a bigger desire, bigger commitment [this week] in the players,” said Sanchez. “Maybe we aren’t so shiny or at our best point, but I feel we are more committed to the next game. It’s a good thing because it’s a short week. I prefer shorter weeks."

SACRAMENTO NOT LOOKING AT STANDINGS: There’s a familiar name at the top of the USL Western Conference coming into this weekend’s action as Sacramento Republic FC puts its undefeated record on the line against Tulsa Roughnecks FC on Saturday (10:30 p.m. ET | Match Center | ESPN+). But rather than focus on the standings, Sacramento is more interested in having the right attitude into coming games.

"I’m not really looking at that [the standings] to be honest,” said Republic FC Head Coach Simon Elliott. “Its more about getting the attitude right and the mentality right and trying to be very clear about what we want the guys to do and going out an executing. We're putting in the work so sometimes you get an outcome of that and sometimes you don't, but we have to keep continuing to try and pick up points."

Not looking at the standings works both ways, and Sacramento is not taking Tulsa for granted. After making the USL Cup Playoffs last season the Roughnecks are off to a slow start but with two consecutive draws against the Portland Timbers 2 and Fresno FC the side is showing signs of getting pointed in the right direction.

"Any team in this league on any given day can surprise anybody and can be the better side. We know we have to take this game just like every other game. We approach it the same way,” said Republic FC forward Cameron Iwasa. “We'll come out flying and hopefully we can score a goal early, which we haven't been able to do that yet this year. No matter what, we know it’s going to be a battle regardless of where they are in the table."

After not playing since last Wednesday's 2-1 victory against Colorado Springs Switchbacks FC there is an eagerness for Republic FC's players to get back in front of their home fans. The side is a perfect 3-0-0 at Papa Murphy’s Park so far this season the players give some of the credit to that strong home record to the vibrant support the team receives.

"Papa Murphy's Park is absolutely a huge home-field advantage,” said Iwasa. “The fans come out, they're behind us, they're singing and cheering the whole time. If you can't get up for that game there is something wrong with you. They're always giving us a lift, whether we're tied late in a game, chasing a goal late in the game, winning the game, they are always behind us. We always know they have the belief in us, which makes it easy to believe in ourselves."

RENO BUILDING CONFIDENCE: After a difficult start Reno 1868 FC picked up its first victory of the season last week in a 2-1 win against the Portland Timbers 2, a necessary boost ot the club's confidence ahead of Saturday’s match against OKC Energy FC (10 p.m. ET | Match Center | ESPN+).

“Getting those first three points is a big relief for us, especially when it comes to building confidence as the season progresses,” said Reno Head Coach Ian Russell. “But we look at each match individually so after our first win, our attention shifted to OKC. It’s one match at a time. We’re excited to be home again after a win because no matter what the result is the match prior, our fans are always by our side.”

One player especially who'll be carrying momentum into Saturday's game will be Reno forward Daniel Musovski, who scored a brace against T2 to earn USL Player of the Week honors on Tuesday. With forwards often heavily relying on confidence, the former PDL Top Prospect is determined to take confidence from his performance last week that saw him notch his second and third goals of the season.

“Whenever you can score, you feel more confident going into the next match. We just kept pushing it and knew good things were going to happen later in the match,” said Musovski.