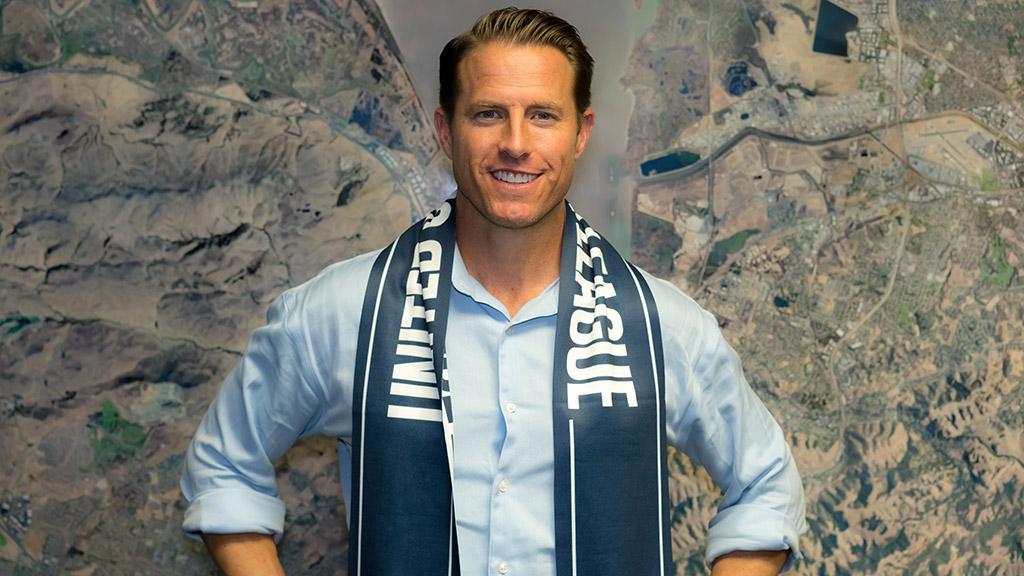 As the first official hire for USL East Bay, the club’s new Sporting Director, Andy McDermott, is certainly prepared for the long-haul as the organization aims toward a projected kickoff in the 2021 USL season. With the scope of the project led by Mark Hall and Hall Sports Ventures, it was one that the former Northwestern standout, professional player and professional coach felt he couldn’t turn down.

We caught up with McDermott this week to talk about the project of building a team for the long-term, his fascinating work history away from professional soccer, and representing the history of San Francisco’s East Bay through the club.

FROM THE GROUND UP

Q: This is a major undertaking that USL East Bay is creating, what is the most exciting part of being involved in building the club from the ground up?

ANDY McDERMOTT: It’s a great opportunity to be a part of the development and see it from “behind the scenes.” This is a unique learning experience for me as well. I’ve been on soccer fields all over the world for almost 40 years, and I’ve experienced it from the perspectives of player, coach, and dad of four little soccer players. But now as an executive, I am taking part in discussions with our CEO Mark Hall and other members of the crew about topics such as land acquisition, entitlements, and construction. I think the most exciting aspect for me currently is being a part of the stadium design and creation of the player and fan experience.

Q: When did Mark Hall initially approach you about joining the USL East Bay team?

AM: We first spoke about this back in 2016 when Mark brought me in to share his vision of a developmental soccer “ecosystem” to complement the already thriving soccer culture in the Bay Area. At first it was just a long lunch where we talked for hours. It grew into an opportunity that developed organically and I joined him in this adventure last year. I’m honored to now be named Sporting Director, and I can’t wait to work with the community to build a professional club that the Bay Area will be proud to call their home team.

Q: You have a background in soccer, and even played in predecessors to the USL as we currently know it. What are your favorite memories from your playing career?

AM: Yes, the A-League was an interesting experience! There were some very professional clubs that are still a part of the USL today, and there were some that, well, struggled… But we had a blast, and some of my favorite memories are from grinding and battling with my teammates in those days. I was fortunate to be captain of the teams I played for in Indiana and Charlotte, and we made the playoffs a couple of times. Back then, a playoff game in a place like Rochester or Montreal meant playing in front of 10,000 fans. I absolutely loved the energy of a crowd like that. And I think it’s fantastic that a lot of USL teams these days get more fans than that for every game!

FROM THE FIELD TO THE SCREEN

Q: Your own path has been interesting too. Let’s start with serving in law enforcement in Phoenix, how did that come about?

AM: Well, eventually I realized that I was never going to be David Beckham… My wife and I wanted to start a family, so it was time for me to get a “real job.” Honestly, for a can’t sit still guy who had been on a team my whole life and who loved interacting with all kinds of people, being a cop sounded like a fun gig. I was fortunate to be part of a tactical squad that spent most of our down time in the housing projects of Phoenix where I made friends with all the little kids because I could play soccer and I spoke Spanish. Yes, it could get a bit nuts and there were some hard days, but I loved solving problems and truly helping people in a way that most can’t understand. Also, the camaraderie of being on a squad of highly capable individuals was very much like the brotherhood from my playing days.

Q: That led to becoming a working actor in movies and television, including cult soccer show Matador, which I think a few of us still miss having around. What was that experience like?

AM: It was great working on a lot of different projects, but I was especially excited about Matador when it came out because it was a combination of my background as a tactical guy and a soccer player. The casting director called me in to audition for one of the lead roles – the British soccer star. I had my hopes up for a bit, but in the end they chose an Australian who never played soccer. Hollywood is a funny place… But, I did get called back to be in a couple of episodes as a different role, and it was a great experience.

Q: You’ve also worked in video games as well, most notably for Call of Duty: Black Ops 3. What sort of reactions do you get from gamers when they put a face to the game?

AM: That was a lot of fun, and one of the most physically difficult shoots I’ve ever done. I think the funniest reactions were from my own kids who I was coaching in LA. Their little teammates started bringing copies of the game to practice with them and asked me to sign the cover. My kids aren’t gamers, so they didn’t get it at all, like, “why do they want my dorky dad to write on their games?”

Q: One of the movies you worked on, Everything Must Go, featured Will Ferrell. Is it odd to think of him now as one of the co-owners of Los Angeles FC amongst everything else?

AM: Will is one of the nicest guys I’ve ever worked with, and I’m not one to say that lightly. You’d never know he was a star, he was so humble and kind. I guess I’m not surprised about the LAFC deal, he’s always been a big soccer fan, and even coached his kids’ teams. That was one of the first big sets I’d experienced, and I remember sitting there in cast chairs next to this big household name who I’d seen in movies a hundred times, and he was asking me about soccer and just wanted to hear soccer stories.

PAST, PRESENT AND FUTURE 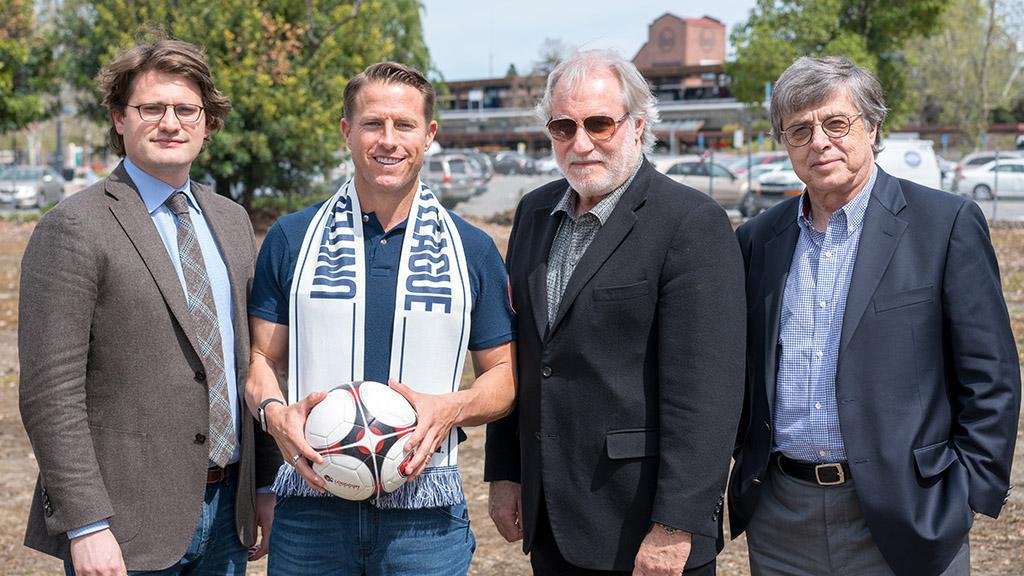 Q: The way the sporting landscape has changed since then has meant soccer has come much further into the mainstream, what has it been like to see that progression over the past decade?

AM: It’s pretty remarkable. I think the advancement in technology has been massive in the popularity of soccer. Teams in leagues all over the world have done a great job of leveraging television and the internet to connect with fans. True story- when I got done playing in 2004, teams were still using VHS tapes to record games! These days – games are streamed online, highlights and other great content is immediately available, and fans can interact with players via social media. We’ve come a long way!

Q: San Francisco’s East Bay has a solid soccer history, how do you aim to incorporate that into the club’s identity?

AM: Yes! That history and the soccer culture is why Mark felt so strongly about building a pro club here. There have been great teams here in the past, and there are still some terrific organizations nearby. Personally, my favorite aspect of soccer around the world is the interaction with the team’s supporters- the connection is so vibrant. A big part of my role will be establishing those relationships in the community – we really want to build the club together so that the supporters become stakeholders in what we’re doing. That way, when that incredible day comes when the team gets to take the field, we will all go to battle together.

Q: What are the next steps for you as the club moves forward?

AM: Mark and our development team are zeroing in on the stadium location and plans. As that happens, we are also in final stages of construction of our training facility in Walnut Creek called COPA Soccer Training Center. This place is going to be a gamechanger – open to the public, for players of all ages, from beginners up through professionals. I’m so excited about the concept: an individual training and assessment facility with advanced technologies and top-quality training spaces with turf fields, futsal courts, and a world-class conditioning center. I believe COPA will be a big advantage as a training location of our USL team as we will be able to help our players develop not just physically and technically, but cognitively as well. As an old guy, it makes me jealous of the young players – I truly wish this kind of place was around back in my day!