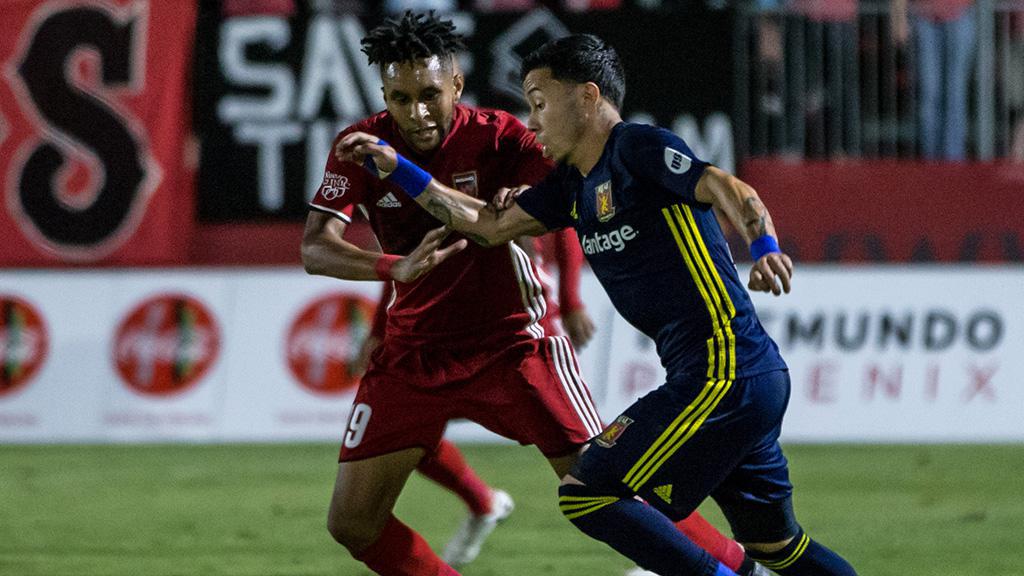 PHOENIX – Phoenix Rising FC and Real Monarchs SLC were expected to be among the biggest contenders in the USL's Western Conference this season, and with both clubs undefeated going into their first meeting of the season on Saturday night at Phoenix Rising Soccer Complex (10 p.m. ET | Match Center) the level of anticipation is high for both clubs. Both come in off two consecutive wins, with Rising FC having taken a late 1-0 victory against Reno 1868 FC while the Monarchs a convincing 4-2 victory against the Portland Timbers 2 in their respective outings last Saturday.

For the Monarchs, the trip to Phoenix represents an early step up in pressure. The side believes it will need a stronger performance than it produced in its opening two victories, both of which saw mistakes that cost Real goals.

“It will be a tough game in Phoenix but it’s about momentum and just feeding off the things we did well against Portland, remembering those things and implementing them this weekend,” said Monarchs defender Kalen Ryden. “The things we can improve on we’ve worked on this week so we’re fine-tuned for this weekend.”

Despite the increased pressure in what will be a difficult away match, there are no extra points on offer for winning this contest. That means both Head Coaches are reluctant to make big changes ahead of the match, looking to accentuate the positives from the earlier wins.

“It’s obviously pleasing to get seven goals in two games, I think right now we’ve always known the way we play, we’re aggressive going forward, we want to retain possession, and play in behind teams,” said Monarchs Head Coach Mark Briggs. “Giving players the freedom to enjoy their football, and allow them to express themselves has proved successful and I don’t think there’s any need to change that.”

The Monarchs ran away with the USL Regular Season Championship last year, and with two wins out of two in 2018 are putting themselves in a position to do so again. As such, the crowd at Phoenix will not be daunting despite how well Rising FC is playing.

“I think we’re preparing like any other game because it’s just another game,” said Briggs. “Phoenix has started very well and they’re a decent side so it is going to be a tough game but we’re not afraid, we’re going to go there and set ourselves out tactically to win the game.”

SAFC, RANGERS OFFER CONTRAST IN STYLE: Two of the strongest teams in the USL Western Conference last season, San Antonio FC and the Swope Park Rangers, face off on Saturday night at Toyota Field (8:30 p.m. ET | Match Center) in an early-season match that could allow both teams to get some momentum going.

SAFC comes into the match off a scoreless draw against the LA Galaxy II where it held plenty of the ball but was unable to produce much end-product.

“We collectively work hard on what we do when we have the ball as well as when we don’t have the ball,” said SAFC Head Coach Darren Powell. “We completed a lot of passes against LA Galaxy II last week and now we need to build on that and make sure we’re can do that with more purpose and intent to add to that possession.”

Preparation for Swope Park is very different, with the Rangers coming in after an impressive display on Wednesday night that saw the side take a 1-0 win against Colorado Springs Switchbacks FC. That means preparation for Saturday will include time management, and a missed training session thanks to travel to San Antonio.

“It’s just about resting. I think the guys know pretty much the way that we play. That’s the most important part,” said Swope Park Rangers Head Coach Paulo Nagamura. “They all know our style of play and what we’re going to do on a day-to-day basis. Of course, we’re going to have a little tweak here and there playing against San Antonio but it’s now more about getting the recovery done, getting rest and getting ready for Saturday.”

There’s plenty of respect on both sides of this match, while the Rangers hold the lead in the series with three wins to San Antonio’s one there have been some thrilling battles between the two that have offered a major contrast in styles in the past as SAFC's counterattack has looked to strike against the Rangers' possession-driven attack.

“Day in and day out you know each game is going to be a grind. It doesn’t matter what team Swope brings, it’s going to be a good team,” said SAFC midfielder Kris Tyrpak. “They are going to have a quality Starting 11 out and hopefully we have an answer to that.”

LOS DOS READY FOR 405 BATTLE: It's might not offer quite the thrills and spills of last weekend's El Trafico, but when the LA Galaxy II head southwest on the 405 to take on local rivals Orange County SC this Saturday night there's still sure to be some added edge to the contest (10 p.m. ET | Match Center) at Champions Soccer Stadium.

With Orange County SC coming into this week off back-to-back victories that have the side tied for second place in the Western Conference standings, Los Dos will have to be at their best to get a third consecutive positive result.

“Orange County is tough. I think they beat Tulsa pretty badly this weekend, so they are in a good run of form,” said Galaxy II Head Coach Mike Munoz. “Our guys have to be up for it. We’ve got to recover. A couple adjustments is all we need. I look forward to the big game.”

With six points from its past two outings things are looking good for Orange County heading into the match, but rather than use the derby as motivation, OCSC is looking to use the momentum from last week to push it forward.

“Two wins were definitely good to get but the mood of the team has been the same through every game,” said OCSC Head Coach Braeden Cloutier. “We approach every game the same way, as a cup final.  Yes, playing the Galaxy is extra special, being that they are 40 miles north of us, but it’ll be the same momentum we took from OKC into Tulsa.”

For the Galaxy II to get anything out of this match there will need to be an improvement in attack, having scored just one goal on four shots on goal in three games so far this year. Despite that Munoz is happy with the first three performances thanks to a notable improvement on defense from 2017 which has helped the side earn draws in each of its past two outings against Fresno FC and San Antonio FC.