Indy, North Carolina square up for battle; Back home, Nashville looks to build on win 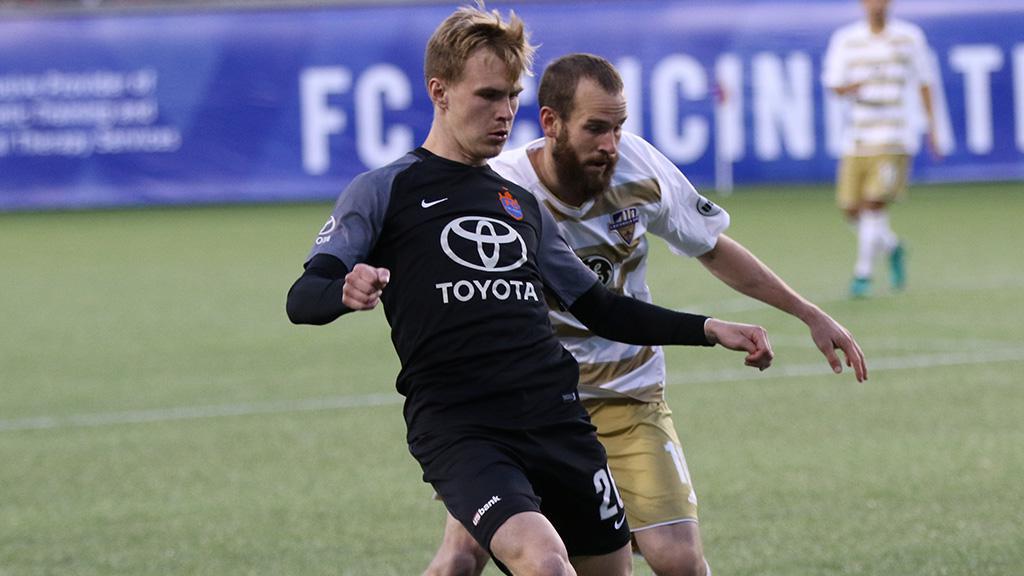 CINCINNATI – Home openers are big matches at the best of times, but this season’s for FC Cincinnati will be the biggest yet as it plays host to a River Cities Cup match against Louisville City FC on Saturday night at Nippert Stadium (7 p.m. ET | Match Center). With both teams coming into the match with perfect 2-0-0 records, and Louisville City FC the defending USL Cup champion, there is no lack of motivation for Cincinnati to get the win.

“Both [the home opener and the rivalry] are very important to us. We want to start off our home games with a win and send the fans home happy,” said FC Cincinnati midfielder Jimmy McLaughlin. “Their support means everything to us. The derby is always special because it is two top teams playing. We have had some excellent games with them in the past and we will obviously want to beat the defending champions. I think it is incredibly important to get off to a good start and to beat strong teams early in the season to gain momentum. It should be a good challenge for us.”

A perfect record three weeks into the USL season is nice, but the season is not won in three weeks, but the full 31-week regular season. That knowledge is spurring Cincinnati on to keep improving and be in a good position at the end and not just the start.

“We continue to work hard to improve every week irrespective of how the previous match went. This is still early in the season and we are looking to build as the season progresses,” said FC Cincinnati Head Coach Alan Koch.

While beating your local rivals is important for any team, what is also important is not getting carried away, and that was something that Louisville Head Coach James O’Connor was keen to stress.

“For us and the supporters, everyone wants to win the derby. In regards to how important it is? It’s the third game of the season for us and for them, so it’s impossible to say how important it is,” said O’Connor. “There’s three points at stake. For us, when there are three points at stake, it’s a very important game. Obviously, things intensify when it’s the derby and the supporters are desperate to beat their rivals, as each rival is. For us, it’s about what the opponent is trying to do and what we are trying to do, and then hopefully we get the performance we want against that opponent.”

That sentiment is echoed by his counterpart over the river, with Koch determined to focus on this match just like any other.

“Every game is worth three points. Being a derby as a home opener makes it exciting, but it doesn’t make the game any more significant than any other match,” said Koch. “We will give it everything we can for the club and the city to earn the three points.”

One man who has seen both sides of the derby is Louisville defender Pat McMahon, who played for Cincinnati during the club's first two seasons. That puts the veteran in a similar position to the one Louisville forward Luke Spencer faced a season ago after suiting up for FCC in 2016, returning as the enemy to his former home.

“It’s a big thing – the River City Cup. The first year in Cincy, we ended up winning it. Last year, Louisville won it. So now that I’m here, we want to retain the cup going forward,” said McMahon. “It’s bound to be a rival game when the teams are so close and the competition is so high. I’m looking forward to getting back there again – it’s a great atmosphere – and we’re excited to get there this weekend.”

FAMILIAR FOES SQUARE UP: After a difficult start for expansion teams, North Carolina FC and Indy Eleven will renew their rivalry in a new league on Saturday evening at Sahlen's Stadium at WakeMed Soccer Park (7 p.m. ET | Match Center). After going up against each other five times a year ago, the frequency of this year's matchups won't be the same, but the contest does present an opportunity for both teams to get some momentum going in the early season.

For North Carolina the match appears especially important. After two losses to open the season, including last weekend's defeat to the Richmond Kickers that saw the side take a lead into the halftime break, getting into the points column on home turf is a major priority.

“It’s time for us to put points on the board. There’s no place better for us to do that than at home in front of our fans. We’ve got to start making Sahlen’s Stadium at WakeMed Soccer Park a fortress like it’s been in the past,” said North Carolina Head Coach Colin Clarke. “That’ll start this weekend against a very good Indy Eleven side. There’s a lot of connections to us, and I’m sure they’ll be well documented, but at the end of the day, it’s about us and what we’re doing right now and we’re looking to get three points from the weekend.”

There are a lot of things in common between the teams. Beyond joining USL in the offseason the two underwent major offseason overhauls to their squads that mean while there are still familiar faces for both like NCFC's Austin da Luz and Indy's Ben Speas, there are also many who are new to either side.

“I think they [Indy] are similar to us in a lot of ways. They had a lot of turnovers. There are a lot of familiar faces from the last few years on their team from around the league,” said da Luz. “Obviously, [Indy Head Coach] Martin Rennie was here and there’s another familiar face in him. But we’re just excited to play against them. They’re always a good side. They’re hardworking and they have a passionate fan base. It’s always fun to play against them.”

While Indy may have a better record than North Carolina there’s still room for improvement as it looks for its second win of the season, one it will have to earn without forward Jack McInerney following his suspension after review of his early-game challenge on FC Cincinnati's Kenney Walker last Saturday.

“I think that last week was a close game which could have gone either way. There were things we were happy about, things that we did well, and things that we have to improve on,” said Rennie. “So this week we have a chance to improve on those things and bring it into another game, we’ve won our first game on the road so now we have to go and win our second.”

NASHVILLE PLEASED WITH IMPROVEMENT: After getting its first win last week Nashville SC returns home to what is set to be a sold-out First Tennessee Park on Saturday night looking to take the momentum from that victory and build some form when it hosts the Charlotte Independence (8:30 p.m. ET | Match Center). But there is no complacency after that win, with the side merely viewing it as a start to an improvement rather than a sign that change has fully arrived.

“The team has taken positive steps in our opening three games, two clean sheets and four points are a decent foundation to continue our improvement,” said Nashville Head Coach Gary Smith. “After a week looking a brighter and more exciting side going forward, the hope is that we can continue in a similar vein.  The additions of [forward, Alan] Winn and [defender, Taylor] Washington helped the team generate more shots on goal than in our previous two games and with home advantage this weekend the emphasis will be placed on decisive and purposeful play.”

Back in Nashville and in its regular home stadium for the first time provides a chance for the team to establish First Tennessee Park as a fortress and with what is sure to be a vocal crowd Nashville's players and coaches are confident of doing so.

“The support for our two previous home fixtures, Atlanta & Pittsburgh, was amazing and a true inspiration for the players,” said Smith. “As a team, we are planning on making First Tennessee Park a tough place to play for any opponent and that starts Saturday. A combination of aggressive play on the field and a vocal crowd behind us will certainly help in the quest to keep our current form on a progressive path.”