Eastern Conf. Notebook — Rowdies Avoid ‘One of Those Nights’ 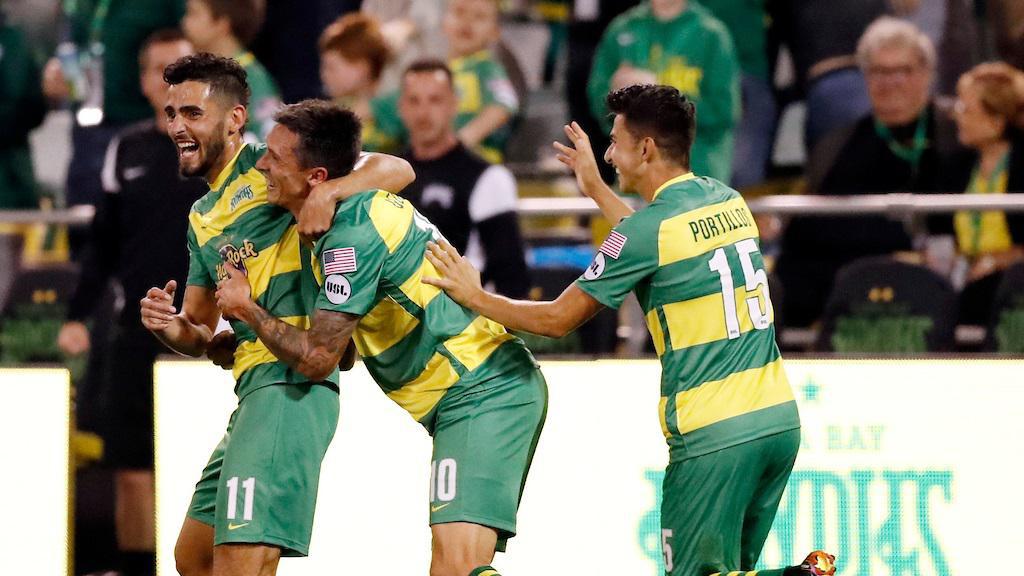 ST. PETERSBURG, Fla. – The Tampa Bay Rowdies were well on top in Saturday night's clash against Bethlehem Steel FC but come halftime they found themselves deadlocked at Al Lang Stadium. Having racked up 13 shots in the first half, including one that had appeared to cross the line only to be ruled out by the assistant referee, it was starting to look like a frustrating evening with Bethlehem goalkeeper John McCarthy proving difficult to get through.

“[McCarthy] was tough to crack,” said Rowdies Head Coach Stuart Campbell. “I thought Cody did well, too. He made a couple of great saves again. Especially early on in the game, the first real chance they had, he made a big save to tip it round the post.”

The frustration was starting to come through at the end of the first half following Leo Fernandes' effort that was ruled to have been cleared off the line by Steel FC defender A.J. Paterson, but that gave way to a phenomenal relief through the sellout crowd of 7,368 fans on hand when Rowdies forward Georgi Hristov hit the back of the net in the 62nd minute. A second goal six minutes later by Fernandes gave the Rowdies a solid cushion, and the 2-0 victory made it two wins of two to start the regular season.

“It was really tough because you start thinking maybe it’s just one of those nights, you know? It was really hard to score,” said Hristov. “I’m happy that we stepped up our level even higher in the second half and scored two very good goals. I’m happy we won because they’re a good team.”

The goal capped a strong performance from the Rowdies, who got the win they deserved against a difficult Steel FC side. With a visit to Louisville City FC coming up next weekend, Tampa Bay got the sort of performance it was looking for to face the defending USL Cup champions with plenty of confidence.

BATTERY LOOK TO GET ROLLING: The Charleston Battery got their first win of the season with a 1-0 win after a tough match against Penn FC on Saturday night to get the perennial playoff contender off the mark for the new season at MUSC Health Stadium, and Battery Head Coach Mike Anhaeuser was hopeful after the game that it could be a win that could spark something more from the team as it moves into its upcoming slate of games.

“It was really kind of opposite of last week, but we had to make two or three changes coming into this match so that’s expected. We had a couple of players who played in their first professional game tonight,” said Anhaeuser, whose side finished with only six shots on the night against a solid defensive opponent. “Their nerves were flowing, we gave the ball away in a few tough situations and we just couldn’t find our rhythm to create chances in the first half. In the end, Ataulla [Guerra] scored a great goal and we got the three points. Hopefully, that gets us rolling now, but we know we can play better.”

With so many debutants playing on Saturday it was the experienced Ataulla Guerra that proved the difference for the Battery. It was an impressive goal from the Trinidad & Tobago international as he completely fooled the defenders after finding an opening in the right side of the penalty area, cutting back to open up the space to score.

“It was just a touch of experience and composure in front of goal. I just relaxed myself because I knew I was going to get a chance; and when I got it, I took it to the best of my ability,” said Guerra. “It was a nice finish with my weaker foot. I’m working every day to try to improve in my finishing and my goal-scoring, so I’m happy with the goal.”

The Battery's experience at the back also led to a good defensive performance, which aided the victory. The hosts finished the night with 28 tackles as they held the visitors and dangerous forward Lucky Mkosana in check going forward in Penn's first game of the regular season.

“We were sitting in and they sat back a bit too. They were able to pick the ball up a few times, but it wasn’t up high on the field so it didn’t really put us under too much pressure. [Defenders] Taylor [Mueller] and Skylar [Thomas] were able to keep the play in front of them and limit their chances; they did a great job,” said Anhaeuser. “[Goalkeeper, Odisnel] Cooper played well behind them and made the saves that he had to make. I thought he was strong on crosses and held the ball well. Defensively we were very happy. We’ll be very happy that we defended very well as a team for 90 minutes tonight and take that as we head out on the road for the next few weeks.”

KICKERS BEGIN IMPROVEMENTS: After falling to a heavy loss in their first match of the season the Richmond Kickers were looking to respond on Saturday against Indy Eleven. That response came, and despite a frustrating loss, there were signs of improvement for Head Coach Leigh Cowlishaw.

“I was very pleased. We were looking for a response from the last game, as we were very timid and unsure in that one. I felt that we were the complete opposite today,” said Cowlishaw. “I thought that we pressed to tie the match, I thought we disrupted Indy a lot and unfortunately let in a goal right before halftime. We had a couple of pretty good chances as the game progressed, given the quality of the team.”

A strong part of that improvement was the improved defensive work as the Kickers were much more successful at breaking up the opposing attack. After successfully completing just 42 percent of their tackles last week the Kickers lifted managing a tackle success rate of 70 percent.

“Last week we were poor defensively. The fact that we came out here and put the game on our terms this time around was really encouraging moving forward,” said Kickers defender Scott Thomsen. "It’s just kind of a week-to-week season right now, so that was an improvement from the first one. Now we just clean up one small, little mistake and put some chances away moving forward.”

Despite the loss there seems to be some confidence, and while some nervousness about a repeat of a frustrating year in 2017 might remain around the club, Cowlishaw was having none of that talk.

“We brought in a lot of new players with a lot of quality and we have jelled together so far so good. 0-2 is not a good deal, but it’s the first two games of the season,” said Cowlishaw. “There are what, 34 games in a season, and ideally we wouldn’t want to start out this way, but I don’t think anyone is hanging their heads, there is no negativity.”