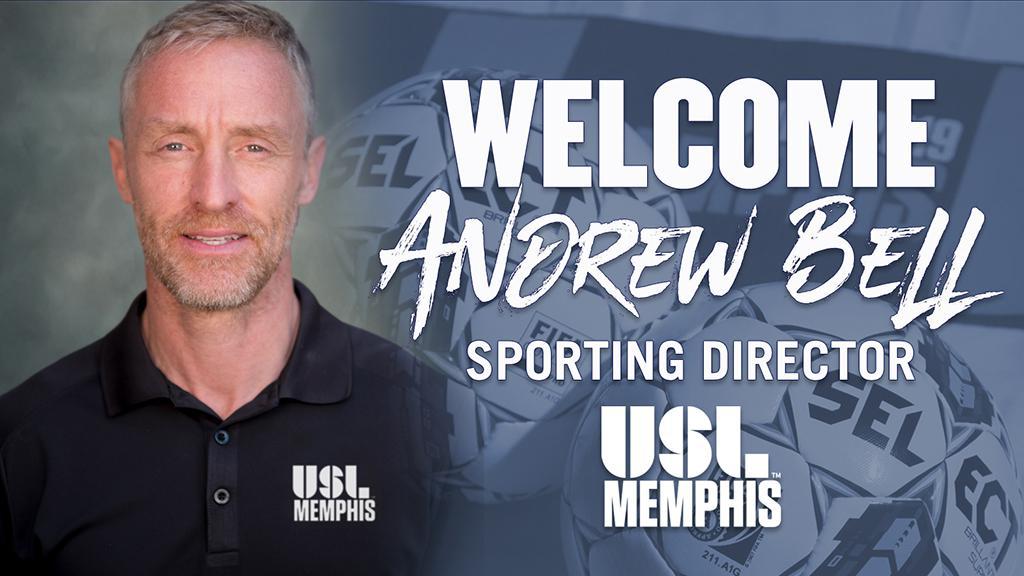 Bell, who has spent nearly 20 years with the Battery, will be tasked with handling all player and technical staff-related decisions and building the USL Memphis Front Office with the team’s 2019 debut one year away.

“We are excited to take this first step in building a world-class franchise,” said USL Memphis President Craig Unger. “Andrew brings tremendous experience on both the technical and business side of soccer, and his knowledge, passion, and dedication to the game is exactly what we need as we get ready to bring professional soccer to AutoZone Park.”

“Memphis is a remarkable city, and the opportunity to help build what I'm certain will be an amazing soccer club was too big to pass up,” Bell said. “I'm excited to start working on the project, and I can't wait to meet the fans. The commitment of our ownership group is going to allow us not just to be part of the amazing growth of professional soccer in the United States but also to create something really special here in Memphis.”

“Charleston’s operation has a fantastic reputation in the soccer world from top to bottom,” said USL Memphis Advisor Tim Howard. “Having Andrew join the Memphis staff brings instant credibility to the organization and sets it up to hit the ground running.”

A native of Wokingham, Berkshire, England, Bell began working for the Battery as its radio play-by-play announcer in 1999 after moving to the United States in 1995. He served in a variety of roles for the team, including Director of Marketing, Director of Sales, and President, which was the role he held most recently from 2008 until moving to USL Memphis.

During his tenure as Battery President, the club won two USL championships in 2010 and 2012 and advanced to the final of the Lamar Hunt U.S. Open Cup in 2008, which marked the last time a non-Major League Soccer side played in U.S. Soccer’s national championship match.

“We want to thank Andrew for all that he’s done for the Charleston Battery,” said Charleston Battery Chairman Eric Bowman. “He’s devoted an incredible amount of time, energy, and passion to this Club for almost two decades and has helped us reach new heights every step of the way. We wish Andrew continued success as he takes on this new challenge in Memphis.”

Off the pitch, Bell was instrumental in a revitalized fan experience at Charleston’s MUSC Health Stadium, including significant investments in stadium infrastructure such as a 3,000-square-foot videoboard, an English-styled pub called The Three Lions Club, sky boxes, and state-of-the-art media capabilities. For the team, recent renovations to the stadium included new locker rooms, a gym, enhanced athletic training facilities, and a practice field designed to replicate the playing surface at the stadium.

Bell was instrumental in bringing many high-profile clubs to Charleston for friendlies, including Rangers F.C., West Bromwich Albion, Portsmouth F.C., and Bolton Wanderers, in addition to many MLS sides for the club’s annual preseason tournament, the Carolina Challenge Cup.

“I'd like to thank Eric Bowman for his support and commitment to the Charleston Battery, this is an amazing club and I'm proud of everything that we achieved together,” said Bell. “I'd also like to thank Mike Anhaeuser and Tony Bakker for everything they have done in support of my role. Without their dedication to the sport, this level of pro soccer would not exist in Charleston.”