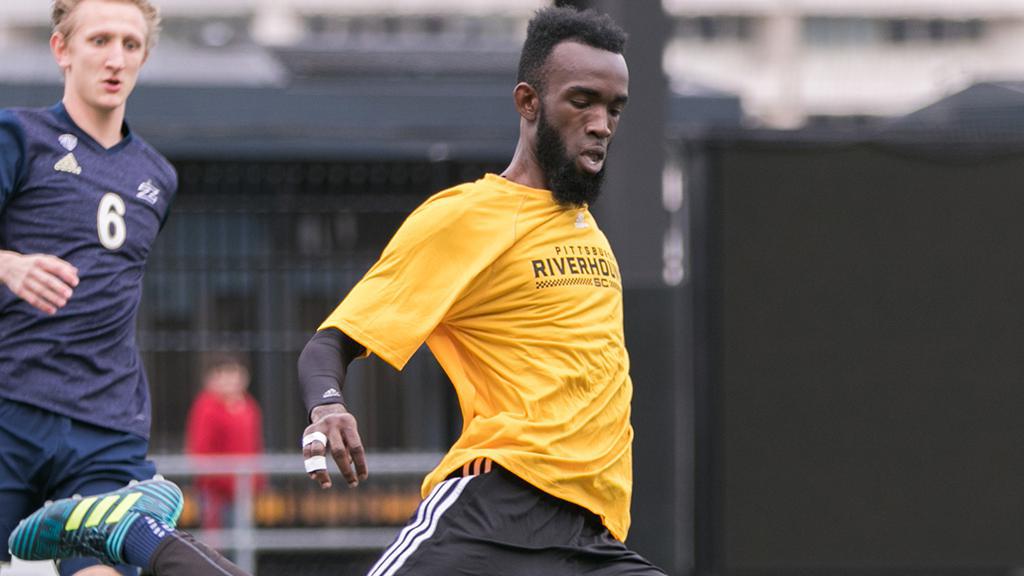 Roberts joins Riverhounds SC after spending the 2017 season with Keystone State rival Bethlehem Steel FC, where he made 25 appearances and led the club with 112 clearances as Steel FC reached the USL Cup Playoffs for the first time. The 25-year-old had spent the previous three seasons with the Richmond Kickers, where two years ago he earned USL All-League First Team honors as he played every minute of the regular season for the club.

“Hugh is an experienced guy in our league who will add some stability to our backline,” said Riverhounds SC Head Coach Bob Lilley. “He provides a solid presence in the air and takes pride in his defending.”

Pratzner joins the Hounds after spending his rookie year in Rochester. The Lancaster, Pa. native posted 13 appearances during the 2017 season in addition to starting both of the Rhinos’ outings in the USL Cup Playoffs.

“Todd was very reliable for us last year in Rochester,” Lilley said. “He’s a very coachable player who is always ready to take on whatever role he is given.”

Lundgaard starred for the New York Red Bulls U23 in the 2017 Premier Development League season as he posted a 0.85 goals-against average and 79.2 save percentage over 14 appearances in the regular season and PDL Playoffs. The 22-year-old was selected by Crew SC in the First Round of the 2018 MLS SuperDraft.

“Ben is one of the most talented young goalkeepers in the country at the moment,” said Indy Head Coach Martin Rennie. “He has a great presence and is a player with very high potential. We look forward to helping him in his development and having him help us achieve our goals this season.”

The 24-year-old made 13 appearances for the Toros after joining the club on August 2, 2017 when he became an immediate starter. Bilyeu recorded one goal – the only goal of the game against Reno 1868 FC on September 16, 2017 – and four assists during his time in south Texas.

Prior to joining the Toros, Bilyeu had spent the previous one-and-a-half seasons with the New York Red Bulls, splitting time between the organization's MLS and USL teams. Bilyeu was selected in the First Round (18th overall) of the 2016 MLS SuperDraft and went on to make a total of 10 appearances for the Red Bulls in all competitions, representing the club in MLS, U.S. Open Cup and CONCACAF Champions League play in 2016 and 2017.

Bilyeu also made 29 appearances for the New York Red Bulls II over the last two seasons, scoring one goal and adding four assists. All four assists came in the 2017 season, giving him eight assists overall in USL play last season.