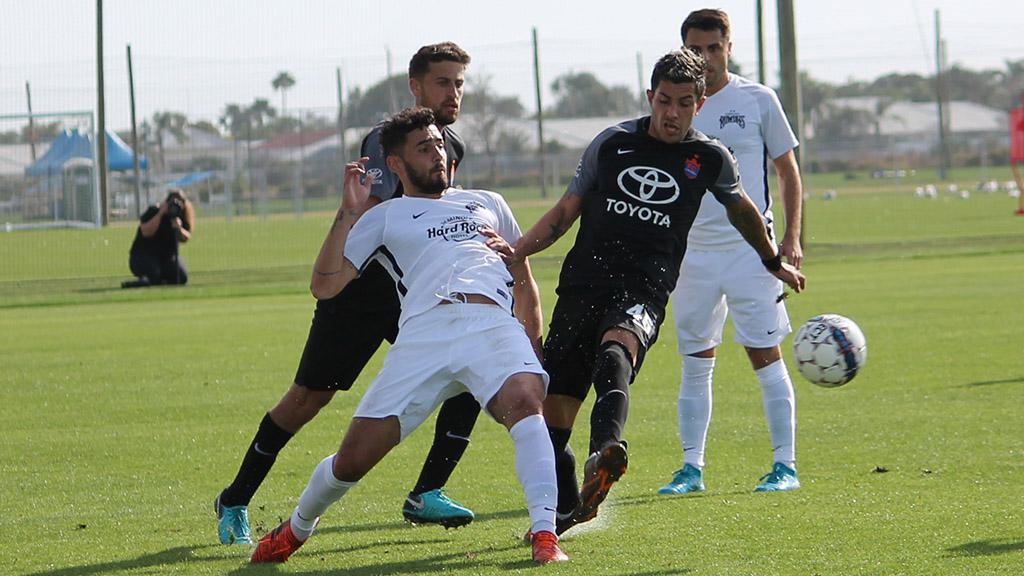 BRADENTON, Fla. – FC Cincinnati scored just past the hour-mark through Garrett Halfhill to earn a 1-0 victory against the Tampa Bay Rowdies in a preseason exhibition between the two USL rivals at IMG Academy on Saturday evening. Halfhill’s goal was the lone tally in an entertaining clash that will see both teams take positives away as they build toward the start of the new season.

Tampa Bay threatened early on, but after the game evened out toward the middle of the half the Rowdies’ almost struck on a quick counterattack in the 25th minute. After Junior Flemmings kept the ball in play on the left, his pass to the center was quickly cycled wide to David Najem on the right, and his low cross almost picked out a sliding Joe Cole arriving late at the back post.

Flemmings was involved again moments later, a good run by Jochen Graf drawing away an FCC defender to open up space for a run up the middle for the Jamaican, but his curling effort went wide of the right post. Cole also went close in the 33rd minute after a turnover in midfield saw Graf play the former England international into the right side of the penalty area, but FCC goalkeeper Spencer Richey saved well at his near post.

Richey was called into action again thanks to Leo Fernandes, whose close-range shot was parried by the FCC goalkeeper. Cincinnati’s best chance of the opening half arrived just before the break as a deep cross from the right by Emmanuel Ledesma was smartly headed back across goal by Danni König, but Justin Hoyte’s shot and Kenney Walker’s follow-up effort were both blocked.

The Rowdies continued to look sharp in the attacking third with its second unit, and trialist Gabe Kellum slipped in Georgi Hristov 10 minutes into the second half for a good finish, only for the Bulgarian to be ruled offside. FCC also threatened when Russell Cicerone zipped a cross through the top of the six-yard area from the right out of the reach of the onrushing attack, but it took a quality save by FCC goalkeeper Evan Newton as he backpedaled to claw the ball away from Hristov’s header to keep the game scoreless.

Cincinnati then took the lead in the 63rd minute as a good cutback from the left side came to an unmarked Garrett Halfhill at the top of the penalty area. The center back controlled and fired a low shot into the left side of the net. FCC’s Lance Laing also forced a save from Rowdies goalkeeper Akira Fitzgerald five minutes later.

Tampa Bay went close to an equalizer with 15 minutes to go as a good cross from the left by Marcel Schäfer found Hristov for a near-post header that was palmed away by Newton. Hristov then hit the top of the crossbar with a free kick from 25 yards out that was targeted for the top-left corner seven minutes, while Rowdies defender Kyle Curinga fired a shot just wide of the left post as the game entered stoppage time, but Halfhill’s goal stood as the difference in an entertaining exhibition.