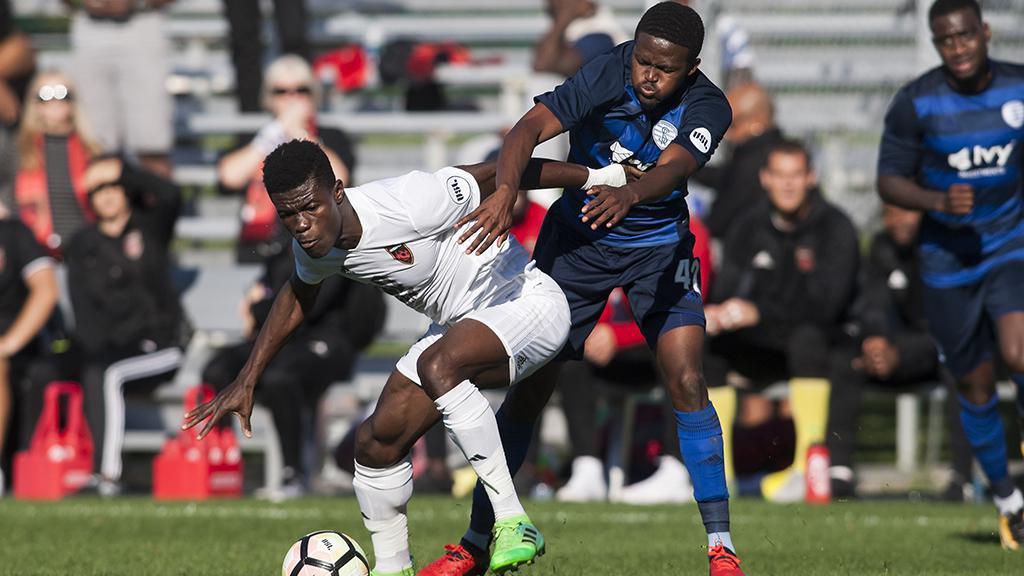 KANSAS CITY, Mo. – The No. 4-seed Swope Park Rangers defeated the No. 5-seed Phoenix Rising FC 4-2 in a penalty shootout to advance in the Western Conference Quarterfinals of the 2017 USL Cup Playoffs after both sides scored in extra time to finish in a 1-1 draw at Children’s Mercy Victory Field on Sunday evening. Swope Park took the early advantage in the shootout as goalkeeper Darrin MacLeod saved from Phoenix’s Kevon Lambert to open the first round, and Nansel Selbol converted for the Rangers. The teams exchanged goals in the second and third rounds, but when Phoenix’s Doue Mala skied his penalty over the crossbar to open the fourth round it opened the door for Lebo Moloto to close out the win, and Moloto obliged as SPR went a perfect 4 of 4 from the spot. With the weather-delayed game scoreless after 90 minutes, Phoenix took the lead nine minutes into extra time as a hopeful free kick from close to the halfway line by Alessandro Riggi found Didier Drogba, whose header beat SPR goalkeeper Darrin MacLeod as he came off his line and bounced into the open net. Swope Park hit back in the second period, however, as an angled cross by Colton Storm in the 109th minute was first met by Belmar, and then headed home by Amer Didic to even the score. Phoenix almost struck again through Drogba in the 113th minute when his free kick from 20 yards was tipped over the crossbar by MacLeod, while SPR’s Lebo Moloto just missed the left corner with two minutes to go as the teams ended level after extra time. Moloto played his part in the shootout, though, sending the Rangers one stop closer to defending their Western Conference Championship.

Nansel Selbol, Swope Park Rangers – Selbol made a difference to the Rangers’ attack after coming on as a second-half substitute as the Rangers looked to settle the game late, and converted from the penalty spot to lead off the shootout as Swope Park advanced.