A champion is crowned as the league reaches a major milestone 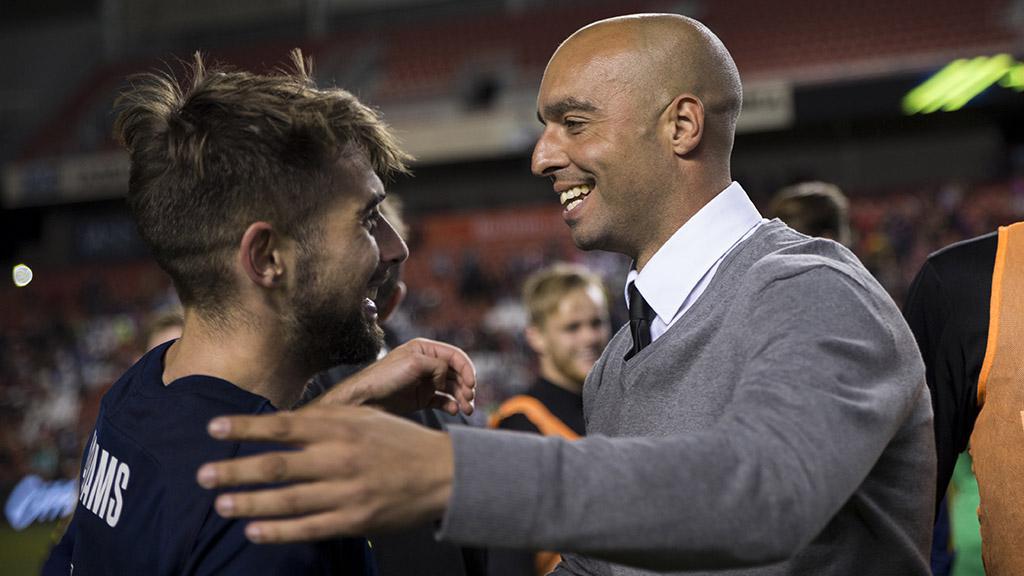 It was a historic week for the USL as the league reached a record high in overall attendance, and the first silverware of the season was claimed by a side that has led the way for much of the season. With the Western Conference field now set for the USL Cup Playoffs and three places remaining up for grabs, there’s still plenty to play for in the final week of the season that brings 17 games across six days before the playoffs arrive. Here are the key talking points going into the regular season’s big finish:

1. HISTORIC HIGH: After the USL surpassed its 2016 total attendance mark in August, the only question that remained for the league was whether it would reach its projected total of two million in attendance for the first time this year. In the final game of the penultimate week of the regular season, the historic goal was reached as another great weekend at the turnstiles sent the league into the history books ahead of schedule. The USL has now tripled its overall attendance in three years, a testament to the work done not only by the league in raising its standards on and off the field but also to the world-class ownership groups and fans that have helped propel the USL to new heights in its first season as a Division II league.

2. CORONATION ANTHEM: At the top of the list this past weekend in driving the league toward two million in attendance this season was a season-high crowd of 8,402 fans on hand to see the coronation of Real Monarchs SLC as the 2017 USL Regular Season Champions. The club’s 1-1 draw with Vancouver Whitecaps FC 2 might not have provided all the thrills that prior outings at Rio Tinto Stadium have brought previously this season, but that was all quickly lost in the celebration of a team that emerged strongly at the start of the season and rarely lifted its foot from the gas pedal. The Monarchs appear to have all the ingredients to succeed in the playoffs, too, as they look to become the third successive team to follow a regular season title with a USL Cup.

3. SETTLING ALL BUSINESS: As the Monarchs were celebrating at the top of the Western Conference, the teams it could face in the Conference Quarterfinals were busy celebrating booking their places in the USL Cup Playoffs, as the field of eight was set before the final week of the season. OKC Energy FC rounded out the group with an impressive 4-1 win against the Swope Park Rangers on Sunday evening, and with the side’s current run of four wins in its last five games, it appears to be hitting the form everyone at Taft Stadium was hoping for at the start of the year. With the playoffs putting a championship four wins away from any of the 16 teams in the field, it’s not too hard to envision Energy FC pulling off another road upset, as it did a season ago, to open its playoff campaign in two weeks.

4. STANDING STRONG: While Energy FC will be back in the postseason for a third consecutive season, its in-state rival Tulsa Roughnecks FC confirmed its first trip to the USL Cup Playoffs on Saturday night. Tulsa gamely held on to a 1-0 victory against Seattle Sounders FC 2 at ONEOK Field despite being down to 10 men for more than a half. Christian Thierjung’s goal proved the difference early, as a brilliant long pass by goalkeeper Fabian Cerda bisected the S2 back line to play in Joey Calistri for the final pass, but what impressed more was the work-rate and diligence the side showed in defense after Collin Fernandez’s second yellow card of the game. The bend-but-don’t-break mentality that allowed S2 to record only four of 14 shots on goal is going to be key as Tulsa heads out on the road for its first playoff game in club history. 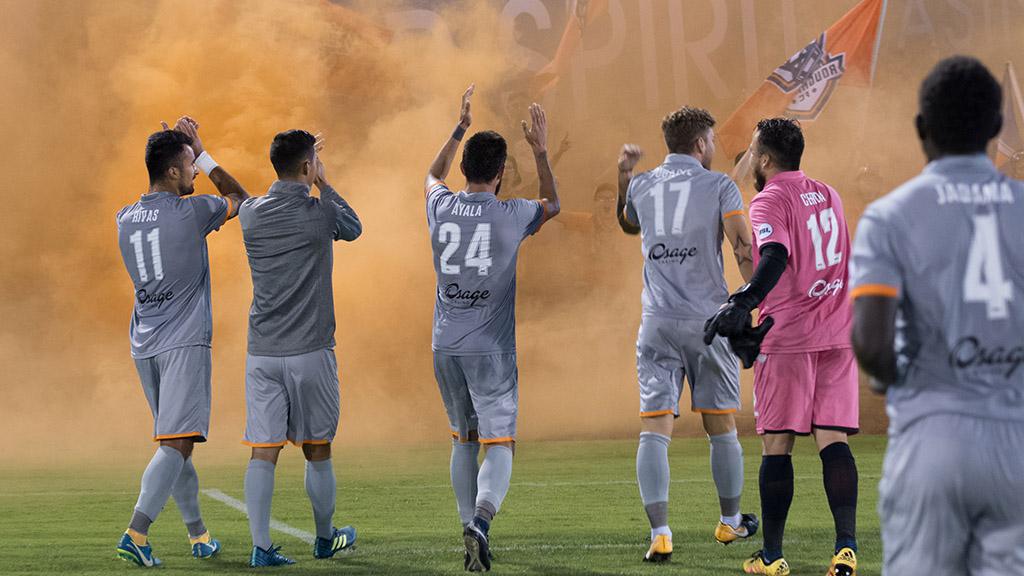 5. WARNING SIGNS: The final team in the Western Conference to book its place in the playoffs over the weekend was Sacramento Republic FC, but the 2014 champions needed help to earn their spot after a 1-0 defeat to Colorado Springs Switchbacks FC that continued to raise concerns about how big a threat Sacramento will pose in the postseason. Granted, there were two pieces missing from the side due to international duty with Emrah Klimenta and Trevin Caesar unavailable, but the side’s lack of offensive production remains a concern after finishing with only four shots total. With the side sitting in the bottom third of chance conversion in the USL this season at just 13.1 percent, there’s a big turnaround needed if this side is going to threaten for another USL Cup.

6. SMOKING HOT: One team that has consistently taken its chances this season has been the Charleston Battery – which is a big part of the reason why the side sits in second place in the Eastern Conference after securing a 4-0 victory against the Harrisburg City Islanders on Saturday night at a festive MUSC Health Stadium for the club’s regular-season home finale. With Cuban forward Heviel Cordoves continuing the lead the way – eight of his nine goals this season have come in the past eight games – the Battery have put themselves in position to earn a chance at hosting two games in the USL Cup Playoffs if they can take victory against regional rivals the Charlotte Independence this Saturday.

7. STRENGTH IN NUMBERS: The Independence, meanwhile, are under threat of missing out on hosting a playoff game for the first time in their history after they were unable to overcome a shorthanded Louisville City FC at Slugger Field on Saturday night, with the hosts taking a 2-1 victory behind goals from George Davis IV and Kyle Smith. Louisville’s inarguable edge over the rest of its conference foes this season has been its depth, and despite having three players called up to international duty and others nursing injuries, City still had enough to come away with victory in a game that, in the bigger scheme of things, didn’t mean a great deal to it. That’s the sort of focus instilled by Head Coach James O’Connor that has made Louisville a clear favorite to reach its first USL Cup this season. 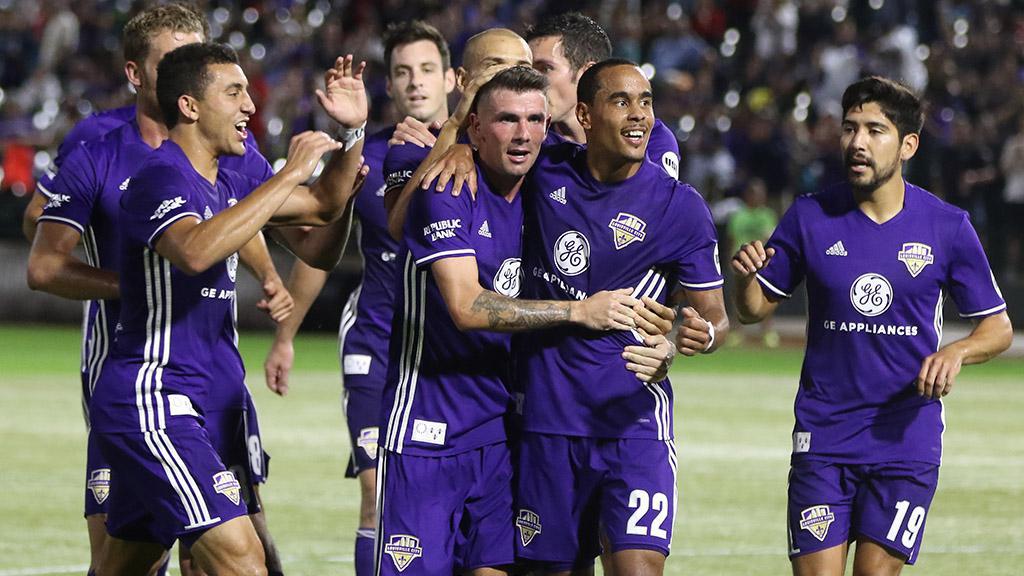 8. WILD LIFE: Over the course of 90 minutes on Saturday night, the New York Red Bulls II showed why they could be both a serious threat to anyone should they reach the USL Cup Playoffs to defend their title and a serious threat to Head Coach John Wolyniec’s sanity. The side’s 6-5 victory against Orlando City B moved the Red Bulls II back into sixth place in the standings going into the final week of the season but should have been a simpler task than what it turned out to be, with Stefano Bonomo’s hat trick having put the side up 5-1 with a half-hour to go. With its playoff life on the line, though, OCB wouldn’t quit, and in the Red Bulls II’s defense it found a willing partner to find a way back into the game. In the end, Florian Valot’s late penalty kick for New York that made it a three-goal game going into stoppage time proved necessary, as Orlando scored again twice more – highlighting a frailty that New York will not be able to afford in the postseason.

9. HIGH WIRE ACT: FC Cincinnati could have booked its place in the USL Cup Playoffs on Sunday, but after a disastrous opening 20 minutes, it could now find itself under pressure to get a result in the final game of the season on Saturday night to even be part of the postseason. Ottawa Fury FC’s 4-0 romp to bring the curtain down on the home portion of its first USL season, on the other hand, could have provided the shoots of what could be to come for the club in 2018 in a display that showed the sort of soccer and finishing that had been expected going into this year. There will be plenty of questions asked this offseason in Ottawa given the inconsistency the side showed, which ended up costing it a place in the postseason, but Sunday might have helped answer some of them in a positive manner.

10. FLORIDA FEUD: After their respective results on Saturday night, and the positions it has left them in, both the Tampa Bay Rowdies and Orlando City B might be grateful that their final game of the regular season arrives on Thursday night at Orlando City Stadium. Both teams now have the chance to apply pressure on the teams around them with a win. In OCB’s case, a win will be the only acceptable result, as a draw wouldn’t give the side a chance to reach the playoffs. FC Cincinnati’s performance on Sunday, though, certainly could inspire confidence in OCB that a place in the postseason could still be there for the taking. For Tampa Bay – which just missed out on retaining second place thanks to San Antonio FC’s late equalizer – a win would put the pressure back on the Charleston Battery to win on the road in its finale two days later. Given those circumstances, the final I-4 Derby of the season is going to be a must-see for numerous fanbases.

11. FINISH IN SIGHT: Throughout the club’s outstanding run through the second half of the regular season, the final goal for Phoenix Rising FC had been to earn a first home playoff game in club history. After Saturday’s 2-0 win against Rio Grande Valley FC in front of another strong crowd of more than 6,000 at the Phoenix Rising Soccer Complex, and the Swope Park Rangers’ defeat to OKC Energy FC on Sunday evening, Rising FC will find out on Wednesday night if its goal is within reach. Phoenix and Swope Park are now level on points, with the Rangers holding the edge in goal differential. Should Swope Park take victory against Seattle Sounders FC 2, it would take a record performance by Phoenix to close out the regular season on Saturday to overcome that edge. If S2 can do Phoenix one final favor, though, the door will be open for an even bigger party in the desert for Didier Drogba and company.