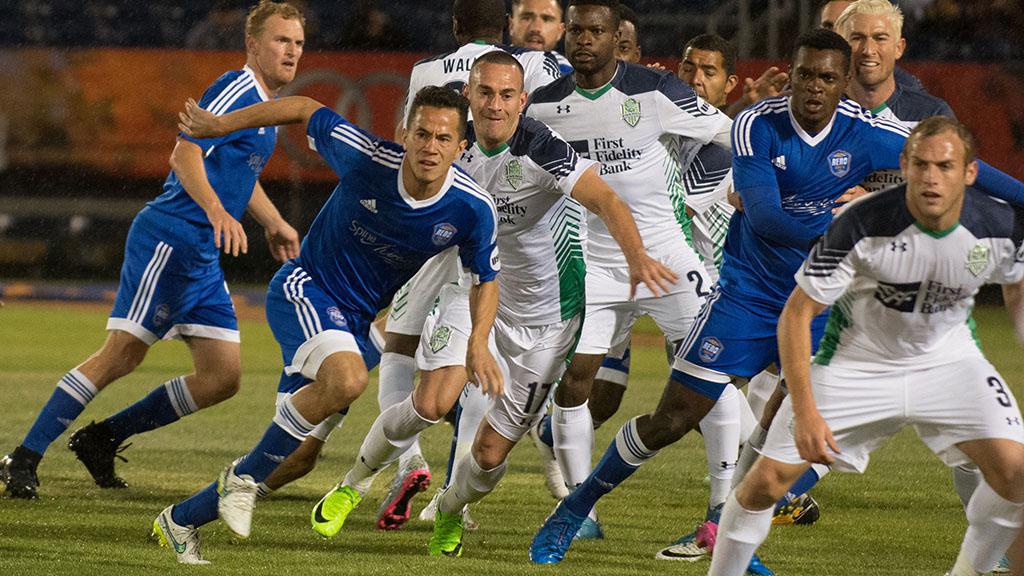 RENO, Nev. – Reno 1868 FC claimed its place in the 2017 USL Cup Playoffs as Lindo Mfeka scored the third hat trick in club history to lead the side to a 3-0 win against OKC Energy FC in front of 6,001 fans at Greater Nevada Field on Wednesday night. OKC almost found an opening on the counter-attack in the third minute only for Jonathan Brown’s chance to be blocked and cleared, but Reno created more chances early in rainy conditions. Jordan Murrell put a header wide for the hosts in the 10th minute, and Antonio Hoppenot fired just over the crossbar six minutes later from the edge of the penalty area. 1868 FC took the lead in the 18th minute, however, as Lindo Mfeka took advantage of a defensive giveaway, drove into the penalty area and fired low to the right corner. Reno almost doubled its lead five minutes later, only for Chris Wehan’s shot to be denied by an excellent save by OKC goalkeeper Cody Laurendi, but then Energy FC was dealt a double-blow as both Laurendi and Coady Andrews had to be substituted after a heavy collision in the penalty area six minutes before halftime. Mfeka notched his second goal of the night five minutes into the second half with a precise finish into the left corner, and while Energy FC almost replied immediately as Brown’s close-range finish hit the left post, Reno continued to look more threatening. Wehan hit the left post after a low cross by Hoppenot from the right reached the back spot, but Mfeka notched his third of the night in the 62nd minute on Wehan’s 10th assist of the season. OKC almost pulled back a goal late, only for 1868 FC goalkeeper Matt Bersano to make an excellent save to deny Brown to preserve the shutout and wrap up a first place in the playoffs for 1868 FC.

Lindo Mfeka, Reno 1868 FC – Mfeka notched the third hat trick in 1868 FC history on a historic night for the club as it both clinched a playoff berth for the first time, and set the USL single-season goal-scoring record.