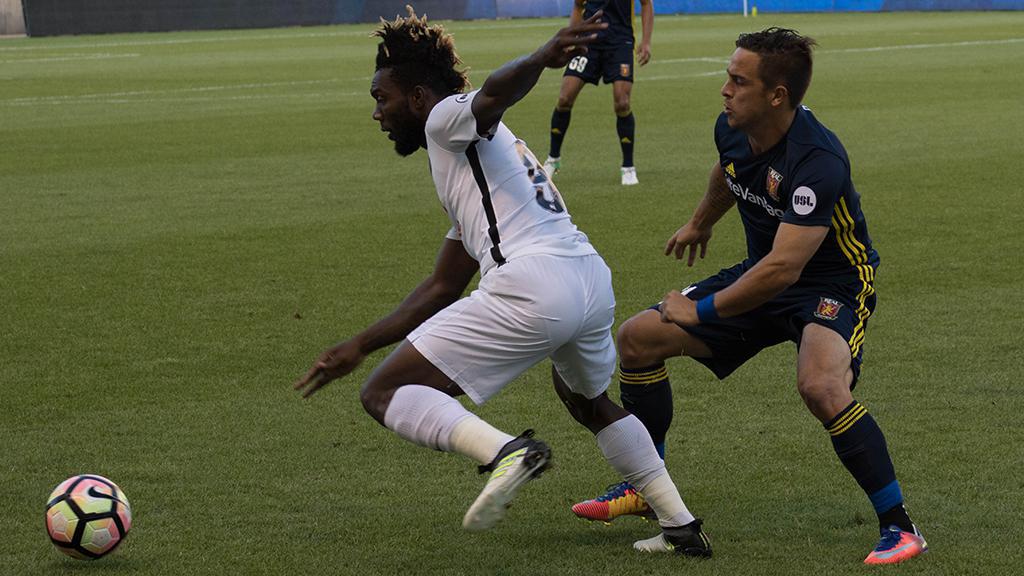 SANDY, Utah – On a night when Real Monarchs SLC became the first team to claim a place in the 2017 USL Cup Playoffs, San Antonio FC rallied for a stunning 2-1 victory at Rio Tinto Stadium on Saturday to hand the Monarchs their first home loss for the season. San Antonio almost took the lead in the 10th minute as a header by Michael Reed was cleared off the line by the Monarchs’ Nick Besler. A pair of good defensive clearances from low crosses also kept SAFC off the board, while Real’s Sebastian Saucedo went close in the 27th minute as his shot from the left side of the penalty area found the side-netting as he looked for the near post. Saucedo also forced a good save from San Antonio goalkeeper Diego Restrepo off a free kick three minutes later, while Reed fired over from 10 yards in the 42nd minute as SAFC almost took the lead just before the break. Ten minutes into the second half the Monarchs took the lead as Saucedo clipped a pass past his marker on the left, cut into the penalty area and found the far corner with a low finish. SAFC almost replied quickly, but Max Lachowecki made a good sliding challenge to keep Kris Tyrpak from a finish, while Cesar Elizondo tried an audacious chip a few minutes later that was claimed by a retreating Connor Sparrow. The Monarchs goalkeeper came up big again moments later to deny a volleyed finish by Elizondo, and Omar Gordon headed the rebound wide. San Antonio continued to press, and Elizondo hit the right post with a low shot from 25 yards. The Monarchs’ Chandler Hoffman almost added a second with 14 minutes to go, only to be denied by a good challenge from SAFC’s Stephen McCarthy, but then San Antonio turned the game in their favor late as an own goal from a set piece by Taylor Peay tied the game with two minutes to go. In stoppage time SAFC grabbed all three points, with McCarthy’s header from Reed’s delivery putting the race for the USL Regular Season Championship back onto the front burner.

Michael Reed, San Antonio FC – Reed was a positive influence throughout the contest, and provided the set piece delivery that led to the winner for Stephen McCarthy in stoppage time.