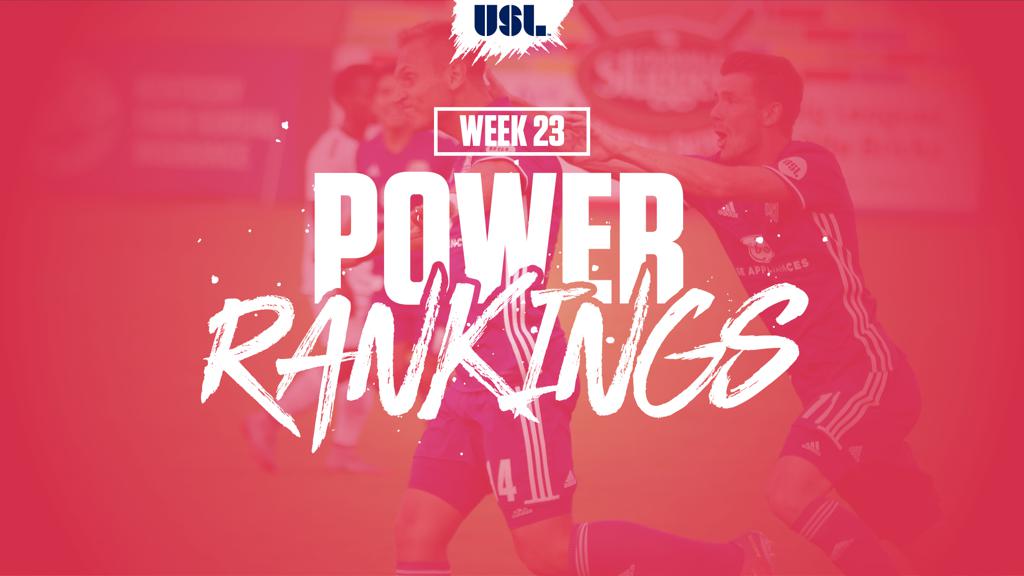 Now within three points of clinching its first berth in the USL Cup Playoffs, Real Monarchs SLC remains on top of the USLSoccer.com Power Rankings after Week 23’s action, with its 11th home win of the season putting it two ahead of its nearest rival for the league-leading mark. A surprising week in the Eastern Conference has seen some reshuffling elsewhere, however, with Reno and San Antonio the main beneficiaries.

The hottest team in the league currently with four wins on the trot, Reno moved into second in the rankings after taking over third position in the Western Conference standings thanks to its victory against the Swope Park Rangers. The league’s leading scorers, 1868 FC now needs only eight goals in its final nine games to set the USL record for goals in a regular season.

The hottest team in the Eastern Conference, meanwhile, makes its debut in the Top 10 this week as Orlando City B rode a statement victory on the road against conference leader Louisville City FC on Saturday into the No. 8 spot. Now 11 games undefeated, OCB has won three of its last four, and will be hoping for more in another crucial game on Thursday night when it hosts fellow playoff contender Bethlehem Steel FC.

1. Real Monarchs SLC (48pts)
Last Week: W 2-1 vs. Rio Grande Valley FC
The Monarchs moved three points away from clinching a playoff place with Friday night’s victory against the Toros, and did so as Chandler Hoffman continued to show the progression of his game leading the line. Hoffman had only recorded five assists in three previous USL seasons, he’s now got seven this year in addition to his team-leading 14 goals. He’ll be key again as San Antonio’s stingy defense visits Rio Tinto Stadium on Saturday in a top-two Western Conference clash.

2. Reno 1868 FC (45pts)
Last Week: W 1-0 vs. Swope Park Rangers
Reno’s winning streak reached four games thanks to Antoine Hoppenot’s early penalty kick against the Rangers. Now sitting third, Reno will have half-an-eye on Saturday’s game between Real Monarch SLC and San Antonio as it prepares for its game with Orange County SC. The right results could see 1868 FC make another move up the standings before Week 24 is done. 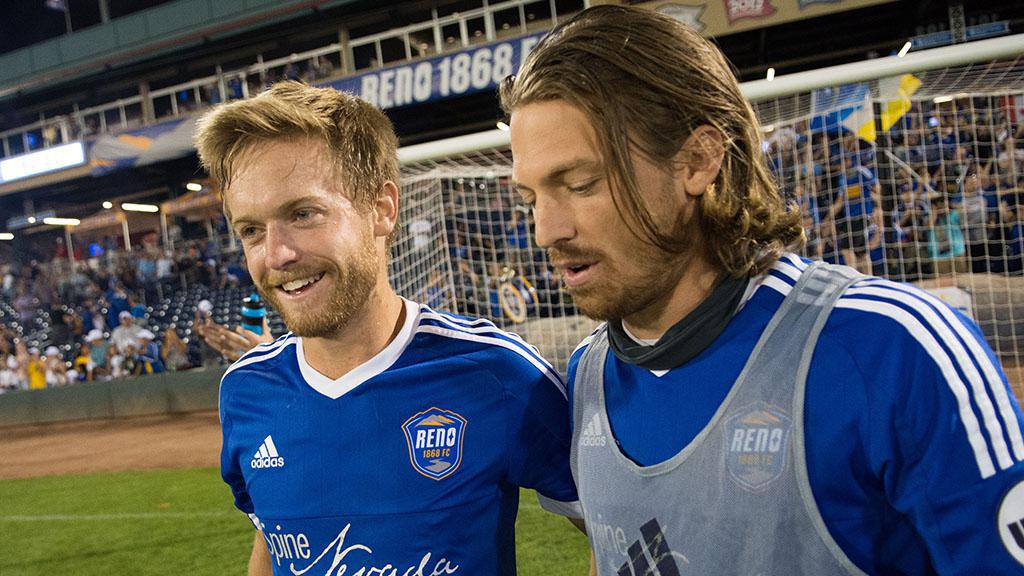 3. Louisville City FC (39pts)
Last Week: W 5-0 vs. Harrisburg City Islanders; L 3-0 vs. Orlando City B
Louisville hit the heights again offensively in its midweek victory against the City Islanders as five different players hit the back of the net, but then saw itself turned away by OCB goalkeeper Jake Fenlason on Saturday night. The good news for Louisville was none of its major rivals capitalized on its loss, leaving the team still well poised at the top of the Eastern Conference standings.

4. San Antonio FC (38pts)
Last Week: W 1-0 vs. Vancouver Whitecaps FC 2; Ppd vs. Portland Timbers 2
Sensibly, San Antonio’s game on Saturday was postponed due to Hurricane Harvey, and all our well wishes are sent to those who’ve been affected. The variety of upsets in the Eastern Conference in addition to the club’s midweek win against WFC2 ensured SAFC move up a spot this week as it gets ready for its clash with the Monarchs.

5. Charlotte Independence (29pts)
Last Week: L 3-2 vs. Toronto FC II
The Independence were bound to fall at the Sportsplex at Matthews at some point, but the team’s defeat to last-place Toronto FC II after holding a two-goal lead was a shocker, even with the side down a man after Alex Martinez’s red card. Charlotte now gets to take on another of this past weekend’s big winners, the Richmond Kickers, who have already visited Charlotte and emerged with a point this season.

6. Charleston Battery (18pts)
Last Week: L 3-1 at Richmond Kickers
The Battery lost to their biggest rival for the first time since July, 2014, but remained on the same amount of Power Ranking points and actually moved up a spot. That’s how weird this past weekend was, as the overall record seems to carry more weight than the Battery’s overall form of one win in nine games. A visit to Louisville is next, with City looking to rebound as well from a tough defeat. 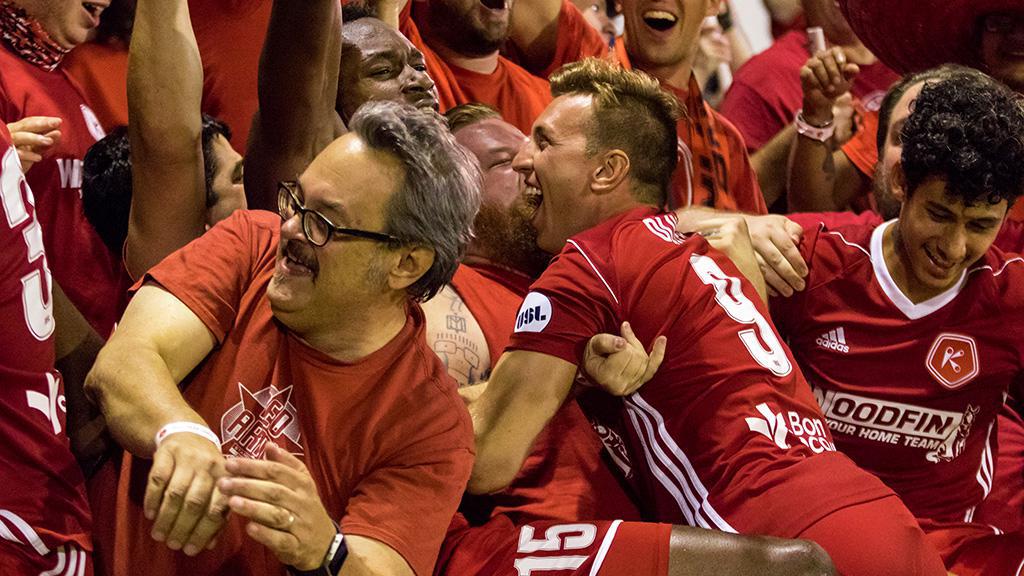 7. Swope Park Rangers (17pts)
Last Week: D 2-2 at Sacramento Republic FC; L 1-0 at Reno 1868 FC
The Rangers could have expected more out of its trip to the Pacific time zone over the past week, but a late concession against Republic FC before being held scoreless in Reno left the side in fourth place as it returns home. Another big game awaits against OKC Energy FC on Saturday night, one where Swope Park will want to re-establish itself on home turf.

8. Orlando City B (14pts)
Last Week: W 3-0 at Louisville City FC
The six-game run of draws distracted a little from what Orlando was putting together, but after taking wins on the road against both Louisville City FC and the Rochester Rhinos as part of its 11-game undefeated streak, it’s clear OCB is a legitimate playoff contender. Making Saturday’s win all-the-more impressive was the fact that leading scorer Hadji Barry and regular starting goalkeeper Earl Edwards Jr. were unavailable, as Michael Cox and Jake Fenlason filled in admirably.

9. Tampa Bay Rowdies (10pts)
Last Week: Bye
The Rowdies will have been thrilled to see all three of the teams sitting above it in the standings suffer defeat, but less so by the Rochester Rhinos’ victory that moved the 2015 USL Cup champion level on points with them. With the side’s road struggles, Saturday’s game against a New York Red Bulls II side that is desperate for points could be a major test.

10. Rochester Rhinos (9pts)
Last Week: W 2-1 vs. Saint Louis FC
The Rhinos made it three wins out of their last five by defeating STLFC on Saturday, and as a result are now a threat to finish in the top four of the Eastern Conference. With a game in hand on fourth-place Tampa Bay, and two on both the second-place Charlotte Independence and third-place Charleston Battery, maintaining momentum against Toronto FC II this Saturday is essential.