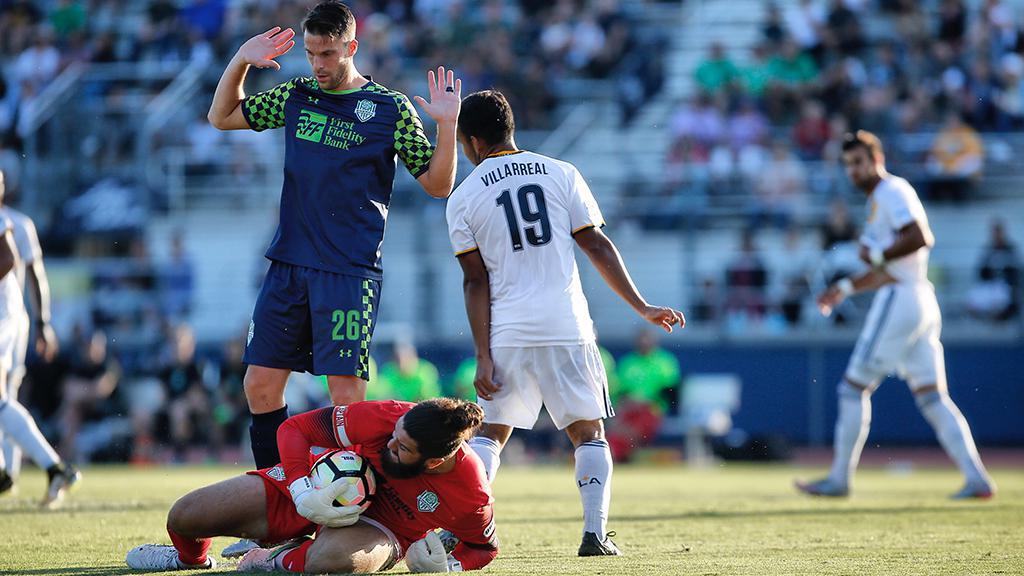 CARSON, Calif. – The LA Galaxy II and OKC Energy FC played to a 1-1 draw on Sunday evening at StubHub Center Track & Field Stadium as Andy Craven’s penalty kick earned Energy FC a point. Los Dos threatened early as a shot by Raul Mendiola saw OKC goalkeeper Cody Laurendi get a hand to it before it was cleared off the line by Sam Fink. Energy FC forced a pair of comfortable saves from LA’s Jon Kempin through Jose Angulo on a turning effort, and a curling shot by Miguel Gonzalez, while Justin Dhillon went close for the hosts, only to be unable to control a sliding finish off a low cross from the left by Ariel Lassiter. Kempin came up with his first big save of the night just past the half-hour mark as he smothered Alex Dixon’s chance near the penalty spot, while Galaxy II defender Hugo Arellano blocked another chance a few minutes later to deny Gonzalez. Los Dos took the lead four minutes before halftime on a counterattack from an OKC corner, as Raul Mendiola found Lassiter in space, and Lassiter fired home from 20 yards in off the right post. Energy FC almost answered in similar fashion seven minutes after the break, only for Jose Barril’s curling effort to hit the inside of the right post and come out. The visitors leveled with 15 minutes to go, however, as Craven converted from the penalty spot after being brought down in the area moments after coming on as a substitute. Both teams looked for a winner late, but the game ended level as OKC edged closer to the Western Conference top eight.

Jose Barril, OKC Energy FC – Barril was central to much that Energy FC did well in attack, hitting the post with a fine shot and creating four scoring chances on the night as OKC rallied to earn a point.