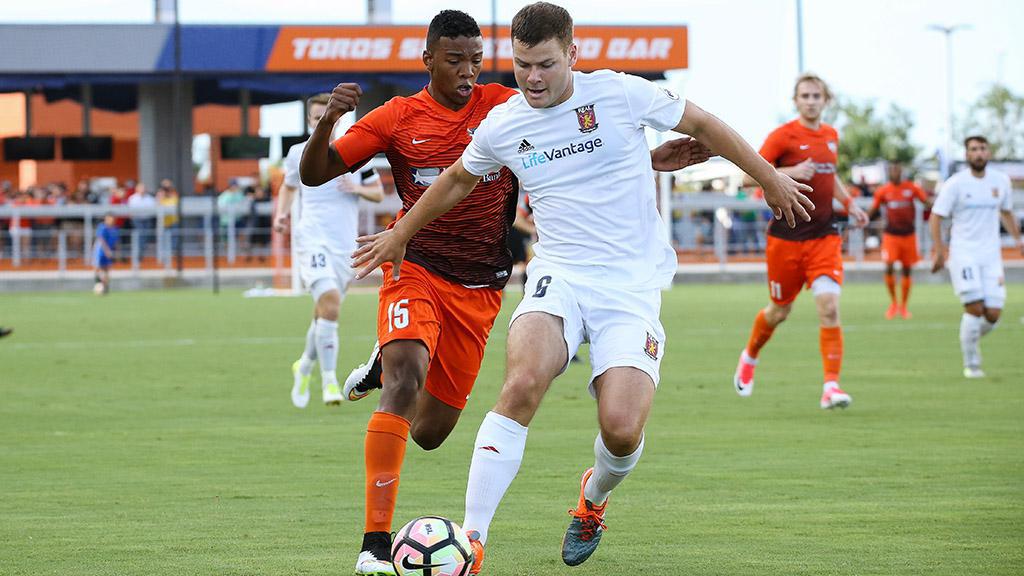 EDINBURG, Texas – Chandler Hoffman scored his 13th goal of the season with a late penalty kick as Real Monarchs SLC earned a 2-1 victory against Rio Grande Valley FC on Wednesday night at H-E-B Park in the USL Game of the Week on ESPN3. The Monarchs (15-2-2, 47pts) grabbed an early lead as a well-disguised pass by Reagan Dunk slid Daniel Haber in for a low finish to the left corner of the net in just the eighth minute. The Toros (6-9-3, 21pts) got the chance to level from the spot seven minutes later from the penalty spot after Jose Escalante was brought down in the area, but Eric Bird’s shot to the right corner was saved by Connor Sparrow. Haber almost grabbed his second of the night for Real five minutes before the break, but his shot hit the crossbar. Sparrow was called into action again in first-half stoppage time as he just turned aside Kyle Murphy’s header from an excellent back-post cross from the right by Kai Greene, and the Toros continued to push for an equalizer early in the second half. The Monarchs almost doubled their lead 12 minutes after the break, however, as Chase Minter sent a low cross in to Haber, only for Victor Garza to block the shot at point-blank range. A minute later, the Toros were level as Escalante fired a first-time shot into the bottom-right corner of the net from the top of the penalty area. The Toros almost took the lead moments later as Francisco Pungo’s breakaway chance was denied by a last-ditch sliding tackle by Max Lachowecki, and the Monarchs almost struck at the other end with 15 minutes to go as Justin Schmidt’s free header from a corner went wide. But Real regained the lead with 11 minutes to go as Charlie Adams was brought down in the penalty area and Hoffman converted from the spot for his 13th goal of the season with a low shot to the left that sent RGVFC goalkeeper Marco Carducci the wrong way. The Toros pushed again for an equalizer late on, but the Monarchs held firm to extend their lead at the top of the Western Conference.

Connor Sparrow, Real Monarchs SLC – Sparrow made six saves – including a fine stop on a penalty kick – and commanded his penalty area well to ensure a win late for the Monarchs.