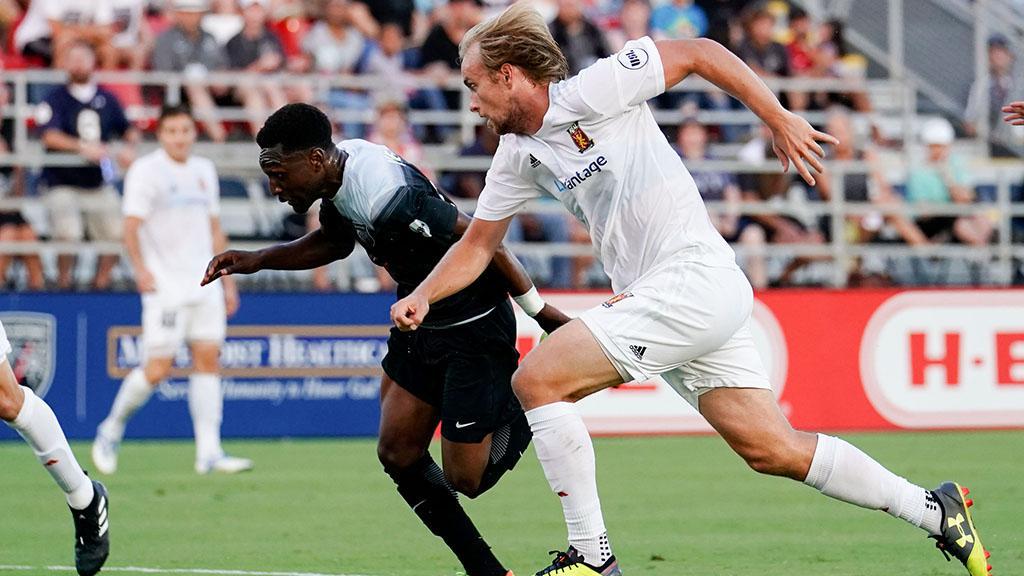 SAN ANTONIO – Max Lachowecki scored with four minutes to go as USL Western Conference leader Real Monarchs SLC earned a 2-2 draw with San Antonio FC on Saturday night in front of 7,642 fans at Toyota Field. San Antonio (10-1-7, 37pts) almost took the lead in the 17th minute when a shot by A.J. Ajeakwa hit the right post after being played into the penalty area by Rafa Castillo, allowing Monarchs goalkeeper Connor Sparrow to claim the rebound. Ten minutes later the hosts took the lead, however, as Billy Forbes stole possession on the left side of the attacking third, and centered a pass to Devin Vega that the 18-year-old controlled and then sent low into the left corner from the top of the penalty area. The Monarchs (14-2-2, 44pts) hit back five minutes later from the penalty spot when Chandler Hoffman was brought down just inside the area by Sebastien Ibeagha, and the forward buried his shot low into the right corner as Diego Restrepo dove the wrong way. Ajeakwa almost gave the hosts the lead again in the 65th minute as he got in behind the defense, only for Sparrow to make a fine save, but three minutes later SAFC regained the upper hand as Kris Tyrpak got to a low ball through the six-yard area by Ibeagha that he put home just in front of his marker. The Monarchs grabbed another equalizer with five minutes to go, however, as Max Lachowecki headed home from Chase Minter’s cross from the right into the right corner of the net. San Antonio had one last chance to grab victory, but another good save by Sparrow denied the fullback’ chance from the left to preserve a point for the Monarchs.

Chase Minter, Real Monarchs SLC – Minter’s introduction changed the Monarchs’ shape, and the midfielder provided the crucial final ball to earn his side a point on the road.