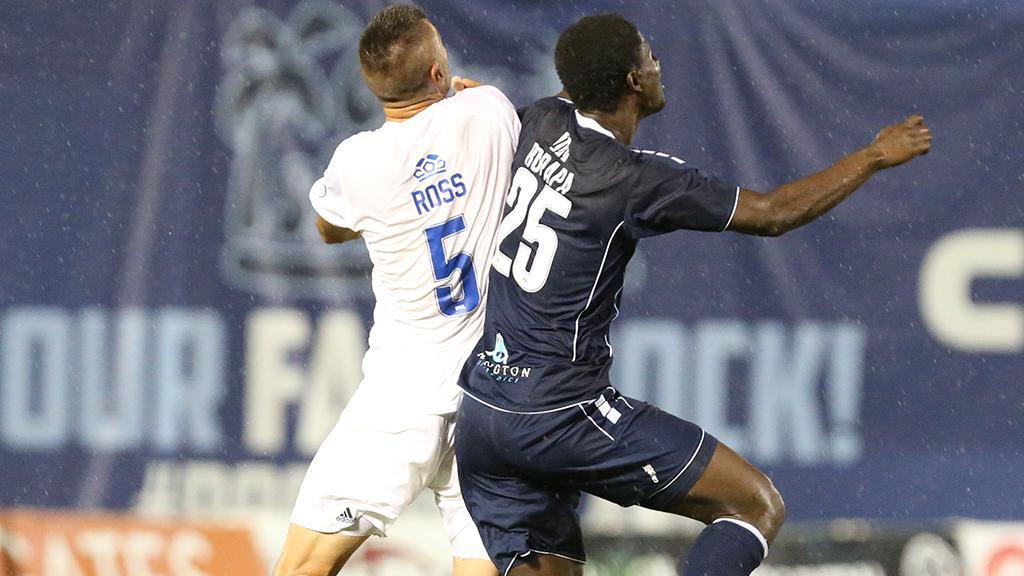 HARRISBURG, Pa. – The Harrisburg City Islanders were unable to claim their first three-game winning streak of the season, but given the circumstances, Head Coach Bill Becher was pleased his side was able to emerge from Tuesday night’s contest against the Charlotte Independence with a 1-1 draw at FNB Field.

“I give us a lot of credit,” said Becher. “It was our fourth game in 11 days, a lot of the same guys have been playing because we have a lot of injuries and we lost two more in the first half, which is very frustrating, but the guys battled and they fought. It was hard in the second half as Charlotte started coming at us a bit, but they're a good team.”

Sitting second in the Eastern Conference going into the game, Charlotte was the hottest team in the conference with a six-game win streak as they entered Tuesday’s match. Despite that, the City Islanders held the upper hand when it came to creating chances in the opening half, and were rewarded in first-half stoppage time with the opening goal.

Ropapa Mensah played both architect and finisher of the move, which saw the 19-year-old Ghanaian hold possession well with a defender on his back before a good pass to the right side of the penalty area to John Grosh. Mensah’s movement to allow himself a free run to Grosh’s floated back-post cross proved key as he skied above a defensive challenge to head home for his second goal in as many games.

The first-half substitutions the City Islanders had to make, and arduous recent schedule, began to take a toll in the second half, however. With Mouhamed Dabo – who was named to the USL Team of the Week for Week 17 on Tuesday for his performance last Saturday against the Richmond Kickers – withdrawn in the 15th minute, the City Islanders held less possession, and the Independence’s quality began to tell. Jorge Herrera scored the equalizer in the 51st minute after Harrisburg had almost cleared the danger from an Enzo Martinez cross, and Martinez almost gave the visitors the lead midway through the half with a fierce shot from Herrera’s knockdown in the penalty area that was well-saved by Harrisburg goalkeeper Brandon Miller.

“I thought Harrisburg came out with good intensity,” said Independence Head Coach Mike Jeffries. “I didn't think we played our best in the first half...we weren't able to play at the tempo we would have liked. We had some stretches towards the end of the game, where we had control, and to get the goal changed the game. I did feel that in the second half, we came out really sharp, we got the goal, and the last 10 minutes were crazy after the lightning.”

A lightning delay with 10 minutes to go seemed to provide a boost to the City Islanders’ heavy legs, and the hosts almost grabbed a winner with two minutes to go as Danny DiPrima did well to cut back a cross from the right side of the penalty area to Olabiyi. The Nigerian’s shot beat Independence goalkeeper Cody Mizell, but Callum Ross’ presence on the goal line kept the ball from going in.

“I thought we fought hard down the stretch and after the delay, we were all over them,” said Becher. “They made a great save off the line or we would have come out with a 2-1 win.”

As it stands, with the City Islanders having ascended into the Eastern Conference playoff positions after their three-game home stand, the side is happy with where it sits ahead of Saturday’s visit to FC Cincinnati.

“We got a point at home against a very good team,” said Miller. “I am happy that we were able to hold them to one goal but I thought we played pretty well and they stuck one in there in the end. I am happy overall. We had a three-game homestand and got seven points.”