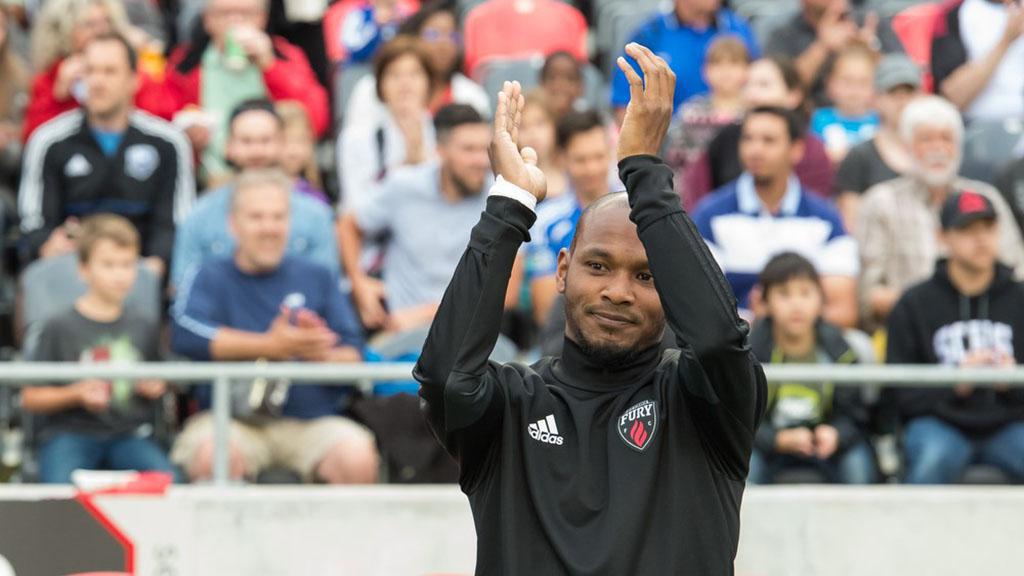 OTTAWA – Ottawa Fury FC said hello to the Montreal Impact for the first time, and one final goodbye on the field to former captain Julian de Guzman on a historic night at TD Place that saw 6,601 in attendance for the club’s exhibition clash with its MLS partner.

While Montreal took a 1-0 victory in the contest on a third-minute set piece that was converted by Calum Mallace in the 3rd minute, it was the final appearance in Fury FC colors by de Guzman that stole the show. De Guzman made his highly anticipated return in the 58th minute of the match to a rousing ovation from all supporters at TD Place.

Goalkeeper David Paulmin, making his first appearance in Fury FC colors, got an early test when the Impact were awarded a free kick in the opening minutes. Wearing the captain’s armband, Montreal midfielder Mallace delivered a pin-point right-footed effort which curled up and over the wall and past Paulmin into the net.

"It was a great free kick in the first half and, apart from not allowing the free kick, there’s not much you can do to stop it,” said Fury FC Head Coach Paul Dalglish. “Other than that, it was great. We gave every single player available in the squad minutes tonight. It was meant to be a celebration of the partnership between the two clubs and I thought both teams played some nice football at times. There could have been some more goals, but overall we’re pleased with how things went.”

After the early concession, Fury FC picked itself up and turned things around quickly. An Andrae Campbell effort on goal, followed by an effort by Steevan Dos Santos effort in the 19th minute, kept Impact goalkeeper Eric Kronberg on his toes. The hosts’ pressure continued as the early efforts on goal were followed up by three free kicks awarded to Fury FC in dangerous areas. The third of those saw Ryan Williams’ effort just graze the crossbar in the 40th minute.

Fury FC made wholesale changes at the start of the second half, with Saturday’s league game against the Rochester Rhinos in mind. As he began to warm up, though, all eyes were on the sidelines as de Guzman prepared to enter. In the 58th minute, the moment came, as in a classy display of appreciation, de Guzman’s entrance was met with a standing ovation by the big crowd in attendance as he entered for Sergio Manesio.

As de Guzman ran onto the pitch for the last time, wearing the number 89 on his back – a tribute to his 89 caps for Canada, the most in the country’s history – Ramon Martin Del Campo immediately bestowed the captain’s armband back to de Guzman’s sleeve. It proved a touching moment for a player and person of the utmost class, quality, and character.

“I was definitely overwhelmed with the recognition and truly thankful for the opportunity,” said de Guzman. “I love Ottawa, and this city has a lot to offer to other Canadian professionals. I keep telling myself that this is exactly what many Canadians want to be a part of.”

De Guzman proved that his touch stood the test of time as he made several impressive touches, delivered crisp passes to his teammates and displayed the same level of hunger and tenacity shown throughout his lengthy career as he stripped the ball from the Impact players. As the game drew into the final 10 minutes, he and his Fury FC teammates were urged along by the Fury faithful who wanted their team to grab the goal that would level the score.

Fury FC continued to press in the late stages of the game – de Guzman included himself in the offensive chances as a ball fell favorably for him just outside of the penalty area in the second minute of stoppage time, only for the chance to be scuffed wide of target.

Fittingly, de Guzman’s effort would be the final one of the match as the final whistle blew shortly thereafter, Fury FC falling 1-0 to the Impact on this inaugural meeting between the two clubs.