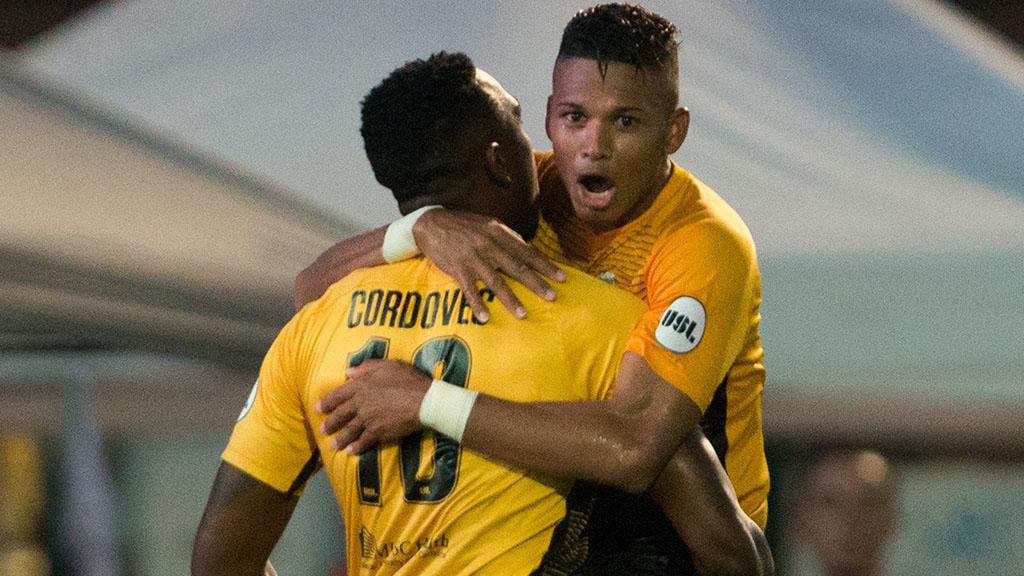 The top two teams in the Eastern Conference both took important home victories as the 2017 USL Regular Season reached its nominal midway point, and in the process set up a mouthwatering second meeting of the season. Elsewhere, the playoff races in both conferences continued to fluctuate, with one team in particular making serious headway in the standings.

1. FEEL THE HEAT: The Charleston Battery’s Romario Williams provided an ideal send-off for his side ahead of his sojourn to the 2017 CONCACAF Gold Cup with his 14th goal of the season providing the impetus for another victory at MUSC Health Stadium, this time a 2-0 defeat of the Tampa Bay Rowdies on Saturday night. The high temperatures in the low country produced a game that took a while to get going, but also provided the space late on for the Battery to take advantage of as two perfect passes by Maikel Chang created big chances for both Williams and Heviel Cordoves that both put away confidently. “He’s a special kind of player and one I’m incredibly lucky to play with,” said Williams of Chang, with the Cuban now tied for the Battery lead alongside Justin Portillo with five assists.

2. EARLY BURST: Thoroughly disappointed by its defeat a week ago, Louisville City FC hit the gas pedal hard from the opening whistle of its 2-1 victory against Ottawa Fury FC in front of 7,814 fans at Slugger Field in another of the weekend’s highly-anticipated matchups. Head Coach James O’Connor’s side has now won four of its past five games. Brian Ownby led the charge for the host, scoring the opening goal and pressuring Ottawa into turnovers in its own half and midfield. If not for the performance of Fury FC goalkeeper Callum Irving the game could have been well in hand for City by the final 10 minutes, when Ottawa’s late goal by Steevan Dos Santos threatened a miracle comeback. Dos Santos’ finish ended up as Fury FC’s only shot on goal for the game, however, as City set up its second visit to Charleston this season with a solid victory.

3. EVEN STEVEN: Another big game on Saturday night saw Sacramento Republic FC play host to San Antonio FC, and while the host at Papa Murphy’s Park took an early lead through Emrah Klimenta, San Antonio found an answer, and then got a stand-up display from Lee Johnston in goal to earn a good 1-1 draw on the road. Making his first USL start thanks to injury to Matt Cardone and suspension for Diego Restrepo, Johnston came through with a big double-save midway through the first half to twice deny Klimenta his second of the night from a corner kick to highlight a strong performance that mirrored that of the team as a whole. “I couldn’t be happier for Lee,” said San Antonio Head Coach Darren Powell. “I’m very proud of his performance and I know the rest of the guys are proud as well.” 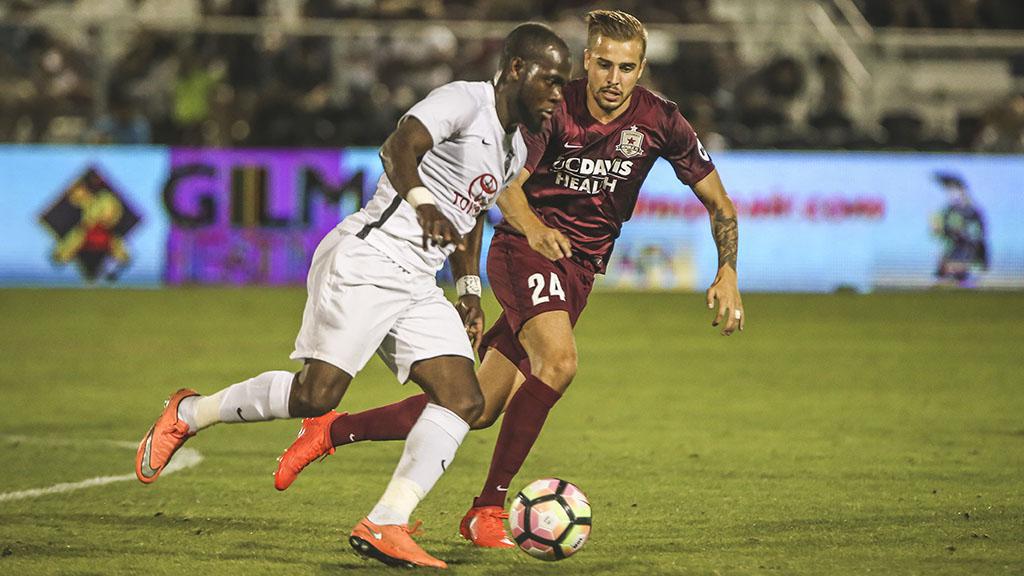 4. TULSA TWO-STEP: San Antonio would have moved back level on points with Real Monarchs SLC had it been able to pull out a victory on the road, with Tulsa Roughnecks FC pulling off a big result for its playoff hopes in a 2-0 victory against the Monarchs at ONEOK Field. To get the points the Roughnecks needed a standout display from Fabian Cerda in goal as the absence of Sebastian Velasquez from the Monarchs’ lineup did little to quell their attacking threat. At the other end, though, Tulsa saw its loanees from the Chicago Fire and FC Dallas come through strongly as Joey Calistri set up the opening goal for Joaquin Rivas, and Collin Fernandez (CHI) and Jacori Hayes (FCD) combined for eight tackles and five interceptions. The combination of Juan Pablo Caffa and Ian Svantesson then put the game to be with 11 minutes to go as Svantesson notched his seventh goal this season to push the Roughnecks right back into the thick of the playoff race with some crucial games coming next.

5. EDGING UP: Just as with Ottawa Fury FC in Louisville, Rio Grande Valley FC produced only one shot on goal in its visit to face Colorado Springs Switchbacks FC on Saturday night. It was also the only shot of the game for the Toros, who were outshot 15-1 by their hosts for the game, but it also proved enough to earn a 1-0 victory at Weidner Field after an 80-minute lightning delay that threw another twist in the playoff race in the Western Conference. Ruben Luna’s penalty kick in the second half allowed the Toros to not only retain their place in the top eight after back-to-back defeats, but also will put the pressure on the Switchbacks to produce some more wins as their position in sixth place looks precarious with the games in hand those below them hold.

6. RANGING UPSTREAM: With results elsewhere causing the race around the red line to tighten, the biggest mover in the Western Conference in the past seven days were the Swope Park Rangers, who claimed two victories to jump into the top three, and the potential for more to come for the defending Western Conference champions. Swope Park’s Friday night 1-0 win against the LA Galaxy II saw Head Coach Nikola Popovic’s introduction of Nansel Selbol around the hour mark pay off handsomely as the Nigerian struck moments later for the only goal of the game. The goal paid off the solid performance overall of Tyler Pasher, who continues to put in positive displays as he waits for his chance with Sporting Kansas City. If the Rangers, who have now won four of their past five, can keep this form, they could make the final third of the second very interesting for the West’s top two.

7. INDEPENDENCE DAY: While the Rangers are making a move in the Western Conference, the Charlotte Independence added even more legitimacy to their recent run of form with a 2-1 win against the Rochester Rhinos in a weather-hit contest at the Sportsplex at Matthews. A brace by David Estrada paved the way to victory for the Independence, who moved into fifth position on the back of their three-game winning streak. Another test arrives on Tuesday night with a visit to a Pittsburgh Riverhounds side that wants to get back above the red line itself. The only Independence Day game in the USL on the Fourth of July should be worth paying attention to. 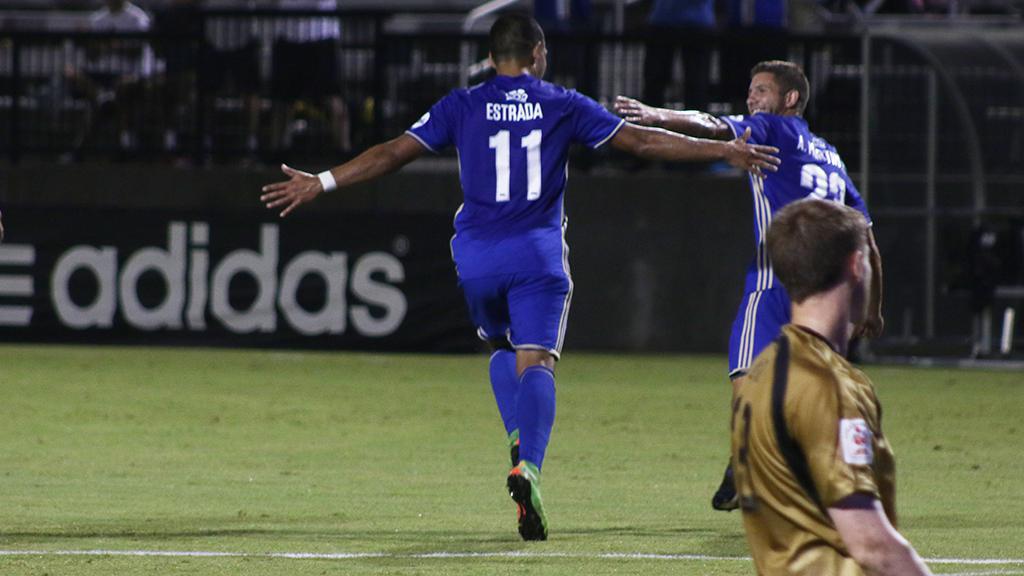 8. ALL-IN FOR ALLEN: Looking back at it when you peruse the stat sheet, it seems remarkable that Brandon Allen’s 30th goal for the New York Red Bulls II was the only one in the side’s 1-0 victory against Saint Louis FC at MSU Soccer Park on Saturday afternoon. Allen’s performance was outstanding aside from his rebound finish after STLFC goalkeeper Adam Grinwis didn’t cleanly claim a free kick by Vincent Bezecourt, as the strike created eight other scoring chances his side couldn’t take advantage of. Allen’s strike-rate of a goal every 119.4 minutes is apparently attracting attention from other MLS clubs, as it should, and it will be interesting to see what happens should a move take place with the Red Bulls II still not out of the woods when it comes to the playoff race ahead.

9. SAINT LOUIS BLUES: There comes a point where the games in hand you hold on those above you in the standings aren’t necessarily a positive anymore. With Saint Louis FC, there is still plenty of time to turn things around, but the defeat in New York was another frustrating display as the chances the side had to take something from the game went astray. The club’s next four games – against Rochester, Charlotte, Charleston and Louisville – are starting to look crucial as to whether Saint Louis will keep itself in the playoff race, or be looking at a wider deficit than the five-point one it currently faces that it has to make up.

10. SILVER STREAK: Reno 1868 FC didn’t earn victory on Friday night against Phoenix Rising FC, with Dane Kelly’s missed penalty kick in the first half the major talking point of the game, but there was still plenty of cause for celebration as Reno set a club attendance record with 7,092 fans at Greater Nevada Field to see what proved to be a compelling scoreless draw. 1868 FC will want to get back on a winning track on Monday night when it hosts the LA Galaxy II to help solidify its place in the top eight, but the success the club has quickly become on and off the field is a major credit to President Eric Edelstein, GM Andy Smith and Head Coach Ian Russell, all of whom have played a major role so far.

11. TIKI TORCH: There are certainly some caveats that come with it, but the Harrisburg City Islanders’ two-game winning streak after Saturday’s 4-3 thriller against Toronto FC II continued to highlight the resurgence in form of Pedro Ribeiro, a vital occurrence in the absence of Aaron Wheeler from the lineup. Ribeiro was a crucial figure in the City Islanders’ remarkable run to the 2014 USL Cup Final, and now in his second stint with the club he’s starting to show off the high ceiling of ability he possesses. With two goals and one assist, and a hand in another of the City Islanders’ goals against TFC II, it’s a very pleasing thing to see as Harrisburg looks to push its way back into the playoff conversation.