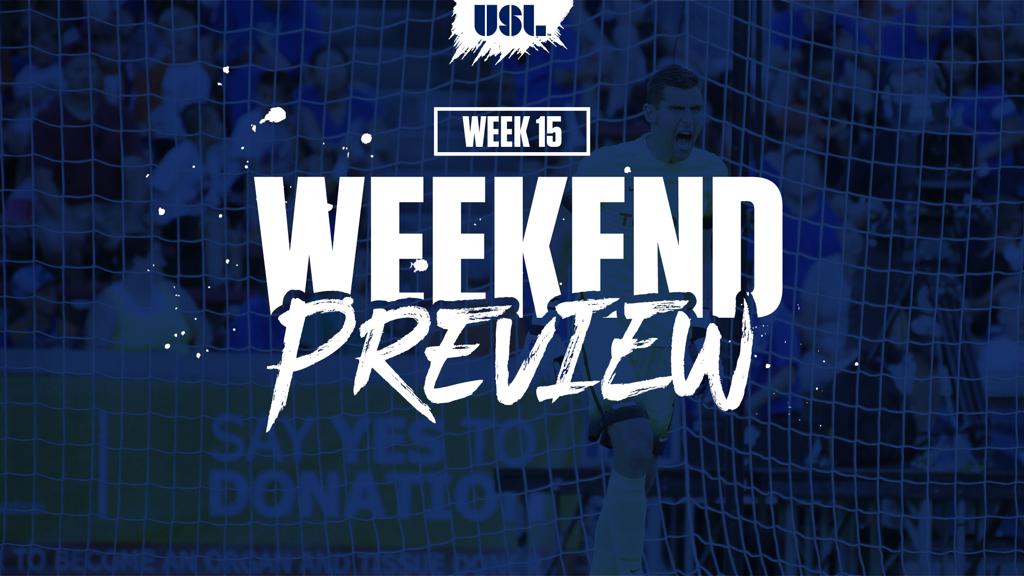 TAMPA, Fla. – The 2017 USL Regular Season reaches the halfway point of its 30-week schedule with top-three clashes in both the Eastern and Western Conference serving as the headline contests in Week 15’s weekend slate. After the midweek thrills of the Lamar Hunt U.S. Open Cup, the focus returns to the race for the USL Cup Playoffs, which remains tight in both conferences.

Eastern Conference leaders the Charleston Battery play host to the Tampa Bay Rowdies on Saturday night at MUSC Health Stadium with a pair of players selected to Jamaica’s 2017 CONCACAF Gold Cup squad set to square off before departing for the tournament. Another key game sees fifth-place Ottawa Fury FC visit second-place Louisville City FC at Slugger Field in the first meeting between the two playoff contenders.

In the Western Conference, second-place San Antonio FC visits third-place Sacramento Republic FC at Papa Murphy’s Park on Saturday night for the second meeting between the clubs this season, with Republic FC looking to bridge the gap between itself and the top two in the conference. Another must-see game kicks off the weekend, with two of the league’s top attacks going head-to-head when Reno 1868 FC hosts Phoenix Rising FC at Greater Nevada Field.

Every game of the 2017 USL season will be available on the league’s Match Center, with updates from across the league also available via Twitter, Facebook and Instagram. 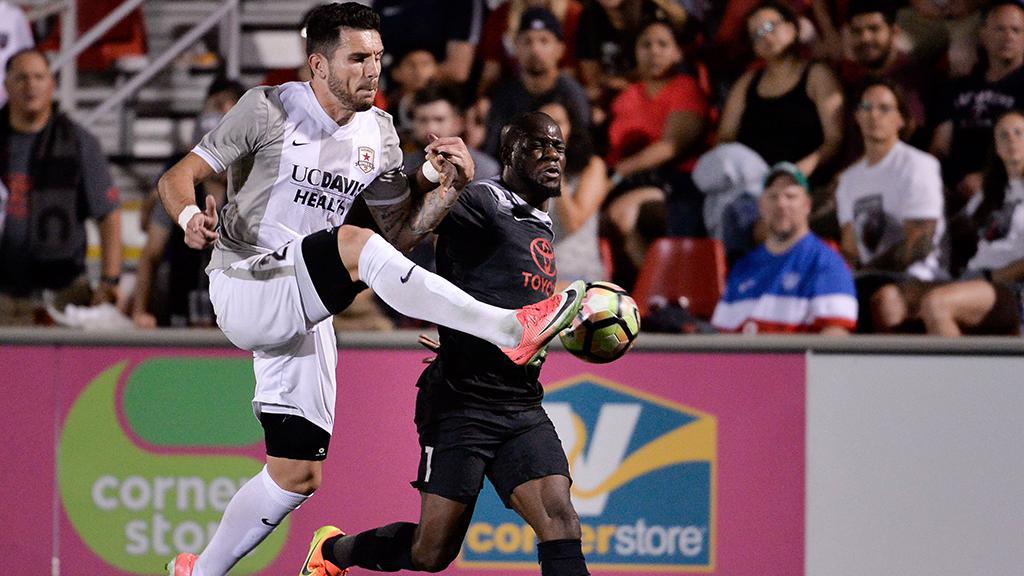 Friday, June 30
Reno 1868 FC vs. Phoenix Rising FC
10:30 p.m. ET, Greater Nevada Field
Reno 1868 FC and Phoenix Rising FC meet for the second time this season, and the first time at Greater Nevada Field, with the attacking duos of Reno’s Dane Kelly and Antoine Hoppenot and Phoenix’s Omar Bravo and Didier Drogba the featured attractions as the clubs separated by four points in the Western Conference square off.

Reno (6-4-3, 21pts) remained solidly in playoff contention last Saturday night as it defeated the Portland Timbers 2 at Providence Park as former T2 player Seth Casiple struck against his previous club. Kelly and Hoppenot have been the driving force behind Reno’s attacking potency this season, though, with the duo combining for 17 of 1868 FC’s 31 goals this season.

Phoenix (5-5-2, 17pts) remained undefeated under new Head Coach Patrice Carteron as it earned a 1-1 draw with Western Conference leader Real Monarchs SLC thanks to Bravo’s first league goal of the season. The former Mexican international has been boosted by Drogba’s arrival, with the former Ivory Coast international playing an important role in the build-up to the finish. After back-to-back draws, though, Rising FC will be eager to get back in the win column, and take some revenge for Reno’s 4-0 win at the Phoenix Rising Soccer Complex in April.

Saturday, July 1
Charleston Battery vs. Tampa Bay Rowdies
7 p.m. ET, MUSC Health Stadium
The Charleston Battery will look to record their second victory of the season against the Tampa Bay Rowdies when the teams square off in a top-three clash in the Eastern Conference. The Rowdies, meanwhile, enter on a six-game winless streak that has put the side under pressure from a chasing middle of the pack in the conference standings.

The Battery (9-2-4, 31pts) romped to a 6-1 victory in their last outing against Toronto FC II as Romario Williams and Dante Marini both notched a pair of goals. The USL’s leading scorer with 13 goals, Williams will depart the Battery after Saturday’s game to join up with Jamaica for the 2017 CONCACAF Gold Cup.

The Rowdies (6-4-6, 24pts) will also see a key player head on with Williams after center back Damion Lowe was also named to the Reggae Boyz squad. The potential head-to-head matchup seems set to be one of the keys to the game as Tampa Bay looks to pay the Battery back for a 3-2 defeat at Al Lang Stadium earlier this season.

Louisville City FC vs. Ottawa Fury FC
7:30 p.m. ET, Slugger Field
Louisville City FC and Ottawa Fury FC meet for the first time in what’s shaping up to be an important game for both in the race for positioning at the top of the Eastern Conference. With City coming off its first defeat in more than a month, it will also want to bounce back strongly in front of a big home crowd.

Fury FC (5-4-5, 20pts) grabbed a vital point thanks to Jamar Dixon’s first goal for the club last Saturday afternoon to earn a 2-2 draw against the New York Red Bulls II at TD Place. Ottawa has lost only once in its past seven games, and will be eager to close the gap on Louisville for second in the conference.

Sacramento (7-6-3, 24pts) has recorded victories in its past three league games, with Trevin Caesar having notched four goals in the past two victories. Sitting 10 points back of SAFC in the conference standings, Saturday’s game could be crucial to Sacramento’s hopes of a top-two seed in the USL Cup Playoffs at the end of the season.

San Antonio (10-1-4, 34pts) saw its 14-game undefeated streak to start the season come to an end at the hands of Colorado Springs Switchbacks FC last Saturday night, and will face a serious challenge with the potential that third-string goalkeeper Lee Johnston will make his first USL start in Sacramento’s hostile environment. With Diego Restrepo suspended for a red card against the Switchbacks, and Matt Cardone on the injured list, SAFC’s defense will have to be at its best. 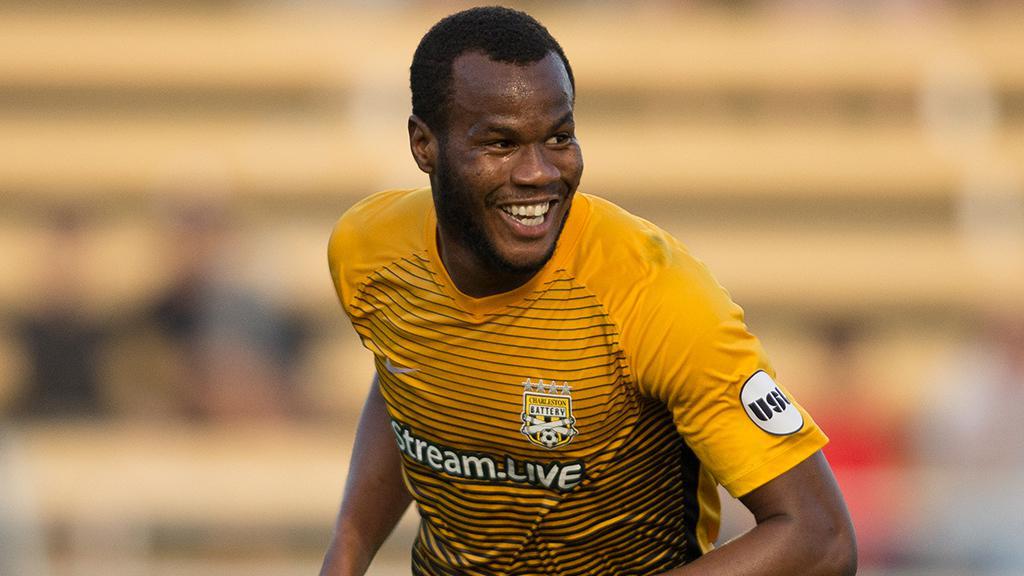 32,287 – FC Cincinnati recorded the second-highest attendance in the Lamar Hunt U.S. Open Cup’s history as 32,287 fans packed into Nippert Stadium to see the host defeat the Chicago Fire in a penalty shootout to advance to the tournament’s Quarterfinals for the first time.

38 – The Swope Park Rangers defeated Tulsa Roughnecks FC 2-1 on Tuesday night despite holding only 38 percent of possession. The Rangers have averaged 60 percent possession for the season.

19 – The Charleston Battery’s Romario Williams and Forrest Lasso have combined for 19 of the club’s league-leading 34 goals this season, the most by any duo this season.

3 – FC Cincinnati goalkeeper Mitch Hildebrandt made three saves in a penalty shootout against the Fire, denying MLS leading scorer Nemanja Nikolic, Arturo Alvarez and Juninho after recording 10 saves in regulation to earn a shutout in the Open Cup clash. 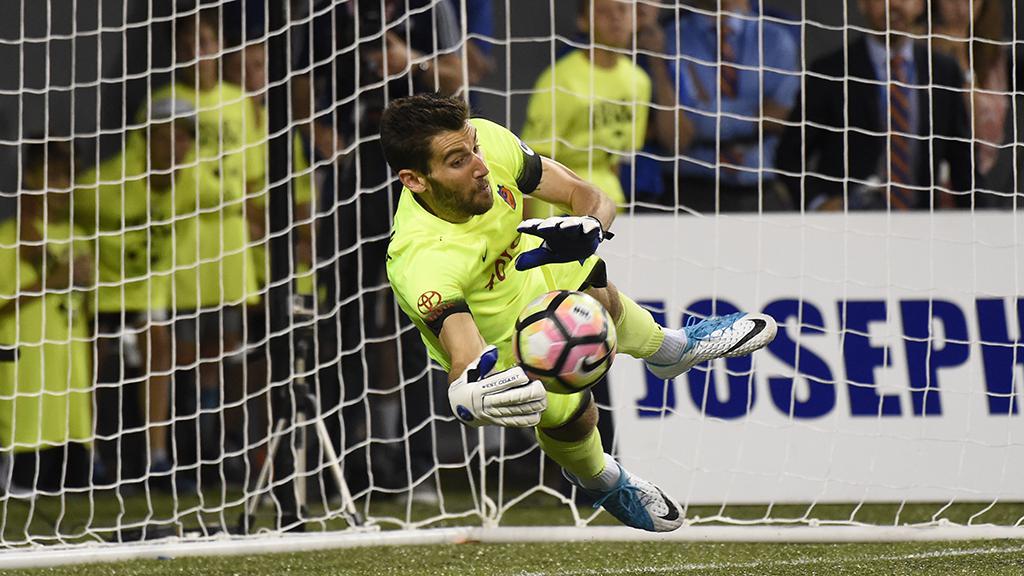 - FC Cincinnati advanced to the Quarterfinals of the Lamar Hunt U.S. Open Cup for the first time in its short history as it defeated the Chicago Fire 3-1 in a penalty shootout after the sides had played to a 0-0 draw in front of 32,287 fans at Nippert Stadium. FCC is the first USL club to reach the Quarterfinals since Orlando City SC in 2013.

- Sacramento Republic FC saw its Open Cup journey come to an end as it fell 2-0 to the LA Galaxy on Wednesday night in the Round of 16. Two former LA Galaxy II standouts came to the fore for the hosts at StubHub Track & Field Stadium, with Ariel Lassiter and Bradford Jamieson IV the scorers in the victory.

- FC Cincinnati (5-5-5, 20pts) will look to carry the momentum of its Open Cup success into a two-game trip to Florida that kicks off with a visit to Orlando City B (5-6-4, 19pts) on Saturday night at Orlando City Stadium (8:30 p.m. ET | Match Center). OCB took a 2-0 victory when it visited Nippert Stadium earlier this season, and could overtake FCC with a win on home turf in a tight Eastern Conference playoff race.

- The Swope Park Rangers (7-4-2, 23pts) will look to build on their midweek win against Tulsa Roughnecks FC when they visit the LA Galaxy II on Friday night at StubHub Center Track & Field Stadium (10:30 p.m. ET | Match Center). The Rangers have won the prior two meetings between the teams, including in the Western Conference Quarterfinals of the 2016 USL Cup Playoffs.

- The New York Red Bulls II (5-7-3, 18pts) and Saint Louis FC (4-5-3, 15pts) are both in need of a victory when they meet at MSU Soccer Park on Saturday afternoon (4 p.m. ET | Match Center). The Red Bulls II almost earned a victory last Saturday, only for Ottawa to equalize in stoppage time in a 2-2 draw, while Saint Louis has lost its past two outings coming into July.

- Real Monarchs SLC (12-1-1, 37pts) will look to extend its 10-game undefeated streak when it visits Tulsa Roughnecks FC (5-8-0, 15pts) at ONEOK Field on Saturday night (8:30 p.m. ET | Match Center). The Monarchs’ USL-record nine-game winning streak came to an end last Saturday after a draw with Phoenix Rising FC, and now faces a Roughnecks side desperate to get back into the playoff picture after three consecutive defeats.

- Bethlehem Steel FC (7-6-1, 22pts) will try to continue its strong recent form when it hosts the Richmond Kickers (2-8-5, 11pts) on Saturday evening at Goodman Stadium (5 p.m. ET | Match Center). Bethlehem has won four of its past five outings to move into the top four in the Eastern Conference, while the Kickers are in serious need of a win as they currently sit eight points adrift of the playoff positions.

- Colorado Springs Switchbacks FC (6-5-5, 23pts) will try to build on its victory against San Antonio FC when it hosts another foe from Texas, Rio Grande Valley FC (5-6-2, 17pts), on Saturday night at Weidner Field (9 p.m. ET | Match Center). The Switchbacks have won three of their past four outings, but fell to the Toros 3-1 when they visited H-E-B Park in April.

- The Charlotte Independence (5-3-4, 19pts) and Rochester Rhinos (5-2-5, 20pts) are separated by a point and a position in the bottom two slots of the Eastern Conference playoff berths when they meet at the Sportsplex at Matthews on Saturday night (7 p.m. ET | Match Center). The Rhinos thumped the Independence 4-0 when they first met this season, leaving Charlotte looking for revenge in its second game at its new home venue.

- Vancouver Whitecaps FC 2 (4-7-3, 15pts) and Seattle Sounders FC 2 (6-7-2, 20pts) meet at McLeod Athletic Park on Saturday (6 p.m. ET | Match Center) with both looking to get back on a winning track. S2 has alternated wins and losses in its past four games – falling 4-3 to Orange County SC last Saturday – while WFC2 is winless in its past three games after a 2-2 draw with OKC Energy FC.

- The Harrisburg City Islanders (3-7-4, 13pts) will look to build on a big victory when they visit Toronto FC II (2-8-5, 11pts) on Saturday evening at the Ontario Soccer Centre (5 p.m. ET | Match Center). The City Islanders defeated Louisville City FC 1-0 behind Pedro Ribeiro’s first goal of the season last Saturday, while Toronto is coming off its heaviest defeat of the season, a 6-1 drubbing against the Charleston Battery.

- Orange County SC (4-4-1, 13pts) will try to build on a wild victory last time out when it hosts the Portland Timbers 2 (1-13-1, 4pts) on Saturday evening at Orange County Great Park (8 p.m. ET | Match Center). OCSC held on for a 4-3 win against Seattle Sounders FC 2 last Saturday night, while T2 fell for the sixth consecutive game against Real Monarchs SLC in its past outing.