Monarchs back to unanimous No. 1, while Sacramento surges 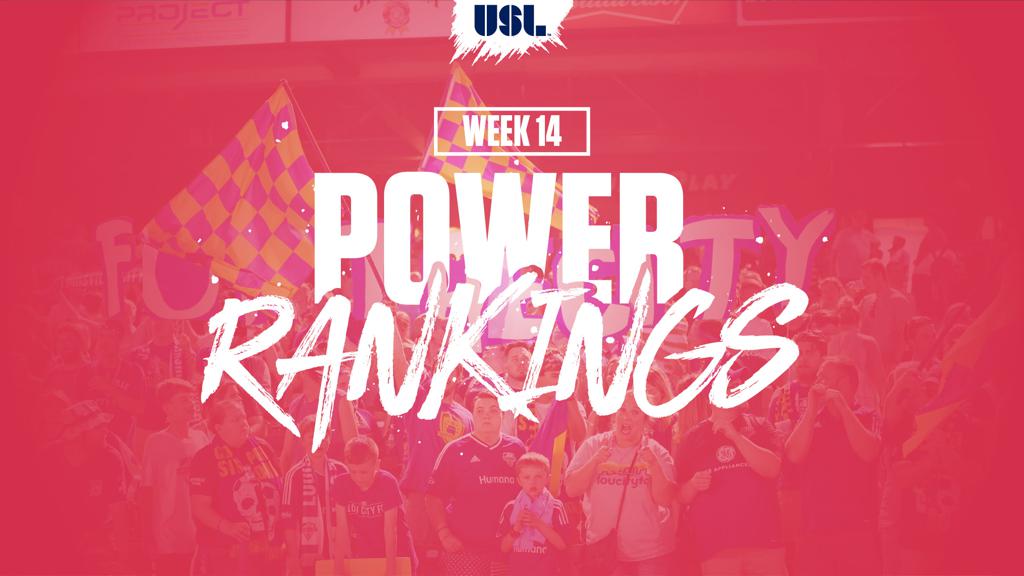 All streaks end, eventually. So it was this past week for Real Monarchs SLC and San Antonio FC, as the Monarchs finally drew for the first time this season to bring an end to their USL record nine-game winning streak, and SAFC finally fell with its 14-game undefeated run – the fourth-longest to start a USL season.

Those respective results saw the Monarchs earn unanimous selection at the top of the USLSoccer.com Power Rankings this week, while the Charleston Battery’s 6-1 thrashing of Toronto FC II also saw San Antonio lose one of its second-place votes, although not its overall position.

The countdown saw major movement elsewhere, however, as Sacramento Republic FC’s attacking explosion saw it go from outside the Top 10 to No. 5 very swiftly indeed. Colorado Springs Switchbacks FC found its way into the rankings proper after receiving votes a week ago, too, while midweek winner Bethlehem Steel FC and its four wins in the past five games is one to keep an eye on.

1. Real Monarchs SLC (50pts)
Last Week: W 2-1 vs. Reno 1868 FC, D 1-1 at Phoenix Rising FC
The Monarchs’ nine-game winning streak is now over, but the side does now sport the longest current undefeated streak in the league at 10 games after its solid display in the desert. Three points ahead of San Antonio FC with a game in hand, Real has the chance to create separation at the top of the conference if it gets back in the win column on Saturday against Tulsa Roughnecks FC.

2. San Antonio FC (44pts)
Last Week: L 1-0 at Colorado Springs Switchbacks FC
The end of San Antonio’s undefeated start is, in the grand scheme of things, a minor disappointment when compared to everything the side has ahead of it this season, remaining well-placed in the West despite the Monarchs’ current edge. Saturday’s visit to Sacramento Republic FC will be another serious test, though, especially with the expected absences of goalkeepers Matt Cardone (injury) and Diego Restrepo (suspension). Getting something from that game, even if it’s a draw, would be a solid return.

3. Charleston Battery (41pts)
Last Week: W 6-1 vs. Toronto FC II
Charleston is both the leading scorer in the USL after its comprehensive victory against TFC II at MUSC Health Stadium, and the possessor of the league’s leading scorer in Romario Williams after he notched his 12th and 13th goals of the season. The Battery have a chance to bolster their position in the next two weeks as well, with third-place Tampa Bay and second-place Louisville both set to visit the Low Country. 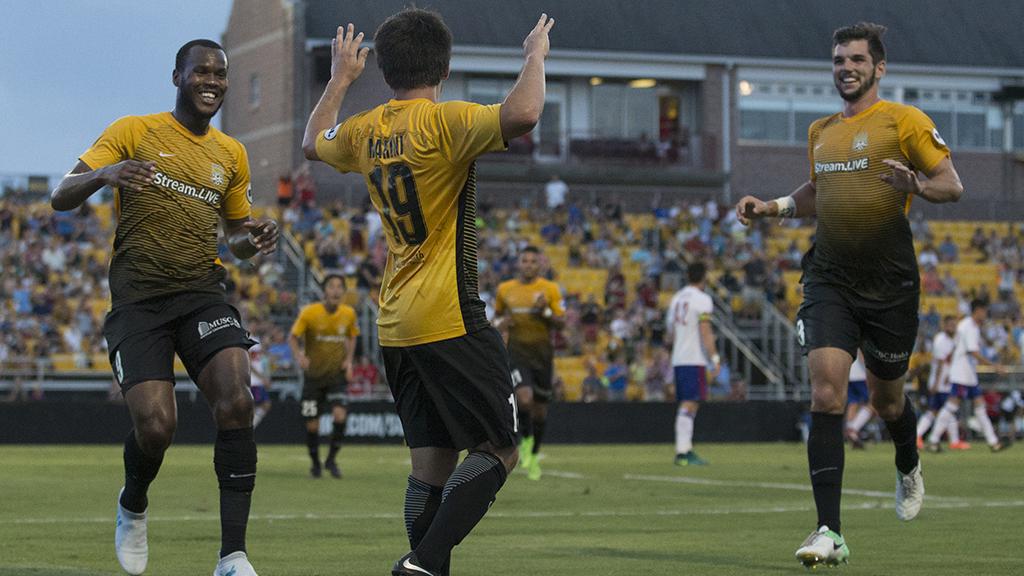 4. Louisville City FC (35pts)
Last Week: L 1-0 at Harrisburg City Islanders
Louisville City FC players and fans were likely scratching their heads after Saturday’s loss against Harrisburg, which provided a bump in the road in the club’s pursuit of the Battery. City rarely has bad performances in back-to-back outings, which could be trouble for Ottawa Fury FC as it visits Slugger Field next Saturday and a crowd that will be expecting a very different display than was on display at FNB Field.

5. Sacramento Republic FC (24pts)
Last Week: W 6-2 vs. Rio Grande Valley FC, W 3-2 at LA Galaxy II
Maybe the most remarkable thing about Sacramento Republic FC’s 6-2 win against Rio Grande Valley FC last Wednesday night was that the Toros had only conceded 10 goals in the entire season prior to that contest, and yet they were pulled apart by an outstanding attacking display by their host at Papa Murphy’s Park. Sacramento has played that way in fits and starts so far this season, but if this form sticks, Republic FC is going to be the side we envisioned at the start of the season.

6. Reno 1868 FC (20pts)
Last Week: L 2-1 at Real Monarchs SLC, W 2-0 at Portland Timbers 2
1868 FC came close to ending the Monarchs’ undefeated run last Monday, with a desperate finish capping an excellent game that saw both sides entertain. Combine that with their solid victory on the road against Portland, and Reno only slips one space this week, with Friday’s game against Phoenix Rising FC looking like a must-see.

T-7. Swope Park Rangers (17pts)
Last Week: W 2-1 vs. Colorado Springs Switchbacks FC
A good comeback win against the Switchbacks moved Swope Park’s undefeated streak to four games, and moved the side solidly back into the playoff positions in the Western Conference. There’s plenty to be gained by the defending Western Conference champions this week, as well, with Tulsa Roughnecks FC visiting on Tuesday night before a trip to the LA Galaxy II on Friday. The Rangers could make a serious move by this time next week. 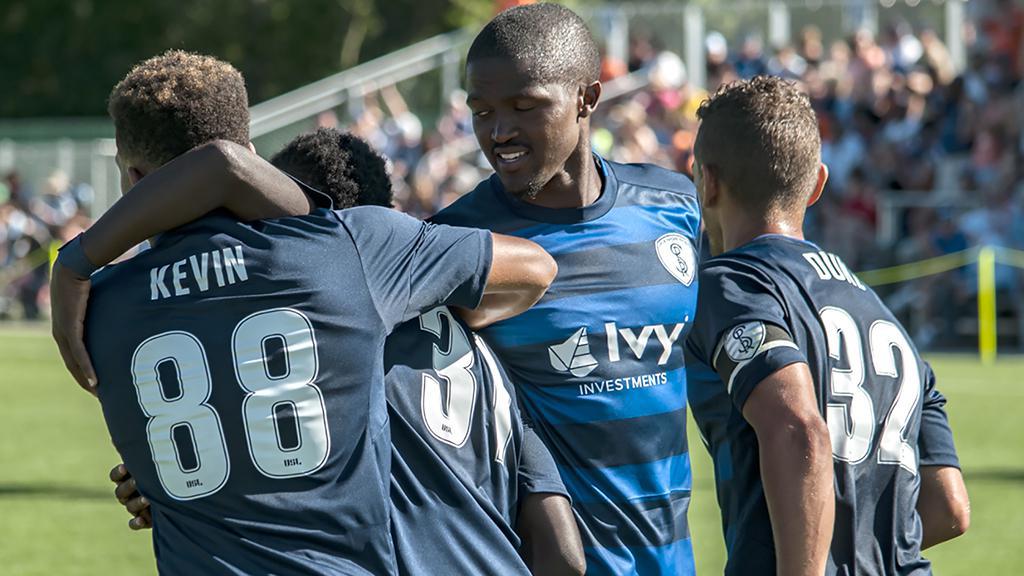 T-7. Bethlehem Steel FC (17pts)
Last Week: W 1-0 at Harrisburg City Islanders
Bethlehem’s victory arrived earlier on in the busiest week of the season so far, but Steel FC’s fourth win in its past five games became more interesting when the side it defeated – the Harrisburg City Islanders – then proceeded to knock off Louisville on Saturday. Steel FC is now nicely poised in the Eastern Conference standings, and hosting Richmond on Saturday evening will be hopeful its strong form can continue.

10. Tampa Bay Rowdies (10pts)
Last Week: L 2-0 at Pittsburgh Riverhounds
There are currently two versions of the Tampa Bay Rowdies: There’s the one that still sits in third place in the Eastern Conference, and on paper looks as though it should be able to compete with anyone it faces in the league. Then there’s the one that currently hasn’t won in more than a month after last Thursday’s defeat in Pittsburgh, and is currently feeling pressure from Bethlehem Steel FC and potentially others. Saturday’s visit to the Charleston Battery is going to be a challenge.