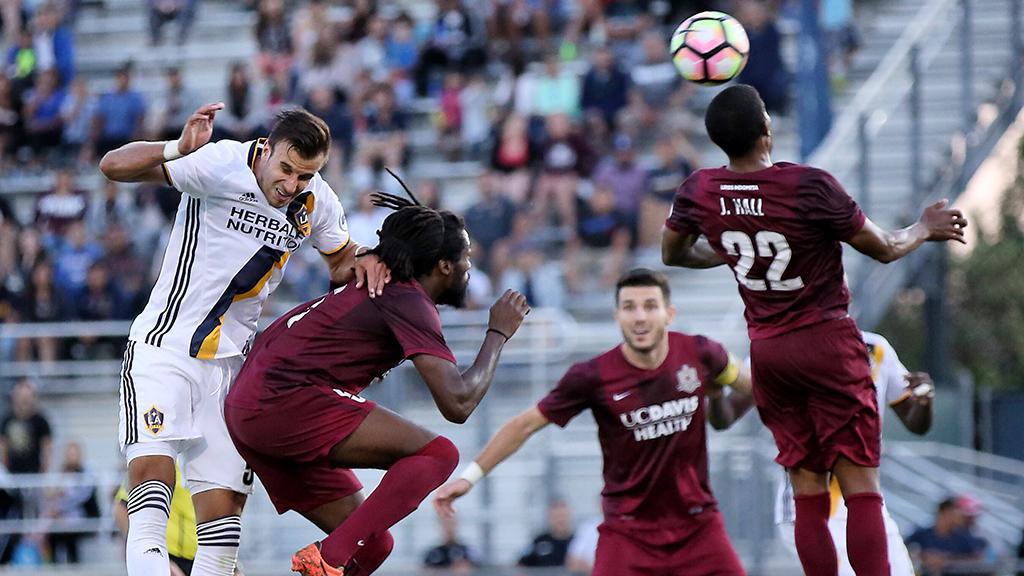 CARSON, Calif. – Sacramento Republic FC scored three goals in seven minutes in the first half, and then held off a second-half rally to earn a 3-2 victory against the LA Galaxy II on Sunday night at StubHub Center Track and Field Stadium. Sacramento (7-6-3, 24pts) took the lead in the 11th minute after a cross by James Kiffe was handled in the Galaxy II penalty area, and Jeremy Hall squeezed his penalty kick into the right corner as Eric Lopez got a hand to the shot, but couldn’t turn it aside. Two minutes later Republic FC almost added a second as Lopez made an excellent save to deny Danny Barrera’s shot to the top-left corner, but the Los Dos goalkeeper had little chance to save from Tyler Blackwood’s close-range header in the 14th minute off a precise cross by Agustin Cazarez. Trevin Caesar got in on the action four minutes later with a low finish after a cross from the right was blocked toward the top of the penalty area. The Galaxy II (3-9-2, 11pts) had the chance to pull a goal back midway through the first half after they were awarded a penalty kick, but Sacramento goalkeeper Evan Newton saved from Adonis Amaya. Blackwood almost added a fourth for Sacramento with a sharp volley, only for Lopez to react well and tip the effort over the bar. The Galaxy II fought back in the second half as Justin Dhillon’s fourth goal of the season pulled a goal back for the Galaxy II early in the 53rd minute on a good break forward, and Adrian Vera added a second with 20 minutes to go. Sacramento almost restored its two-goal lead with a minute to go through Gabe Gissie, only for Jean Engola to clear his shot off the line, but the visitors salted away the remainder of the game to move into third in the Western Conference standings.

Jeremy Hall, Sacramento Republic FC – Hall scored the opening goal of the game, and acted as the connection point as Sacramento built consistently through the midfield.