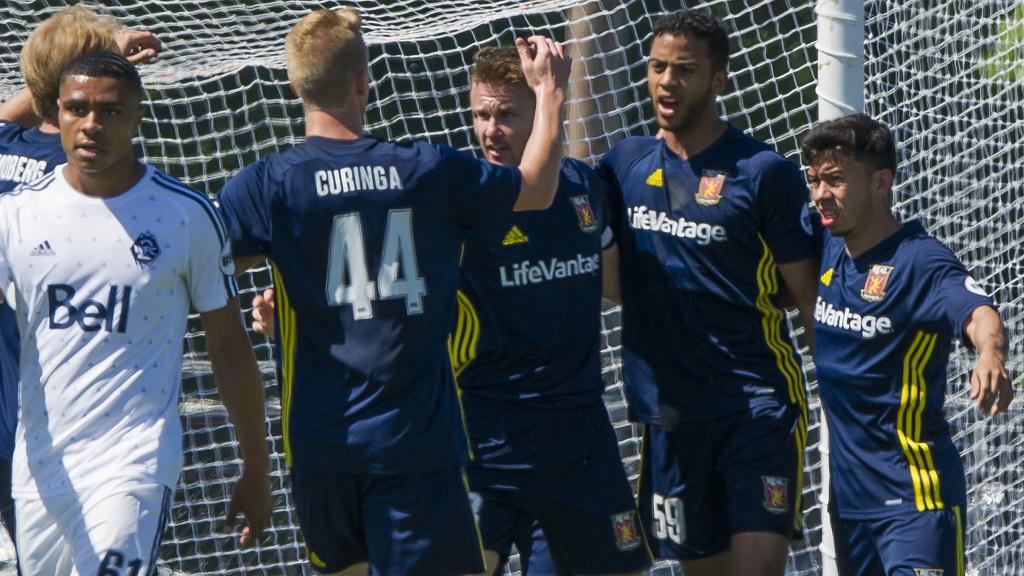 LANGLEY, B.C. – Real Monarchs SLC took its sixth consecutive victory, setting a club record, as it earned a 2-1 victory against Vancouver Whitecaps FC 2 at McLeod Athletic Park on Sunday afternoon. The Monarchs (9-1-0, 27pts) grabbed an early lead as a corner from the left by Charlie Adams found Nick Besler at the far post, and his header back across goal was nodded home by Taylor Peay. The visitors then almost made it two less than 10 minutes in as Chandler Hoffman’s cross from the left was volleyed off the crossbar by Andrew Brody, with Sebastian Velasquez’s effort on the rebound being turned over by WFC2 goalkeeper Paolo Tornaghi. Another corner brought another goal in the 22nd minute, though, as Adams found Besler for a stooping header at the back post with his cross from the left. Vancouver (3-5-2, 11pts) found a foothold in the game in the second half as Nazeem Bartman came on and had a positive influence in attack. WFC2 pulled a goal back with 12 minutes to go when Terran Campbell stabbed home Nicolas Apostol’s cross from the right, and Apostol was involved again as he found Bartman for a volley that went over with five minutes to go, but the Monarchs held on to claim all three points.

Charlie Adams, Real Monarchs SLC – Adams’ deliveries from set pieces provided the two goals that led the Monarchs to victory, as the midfielder created seven chances overall in the contest.