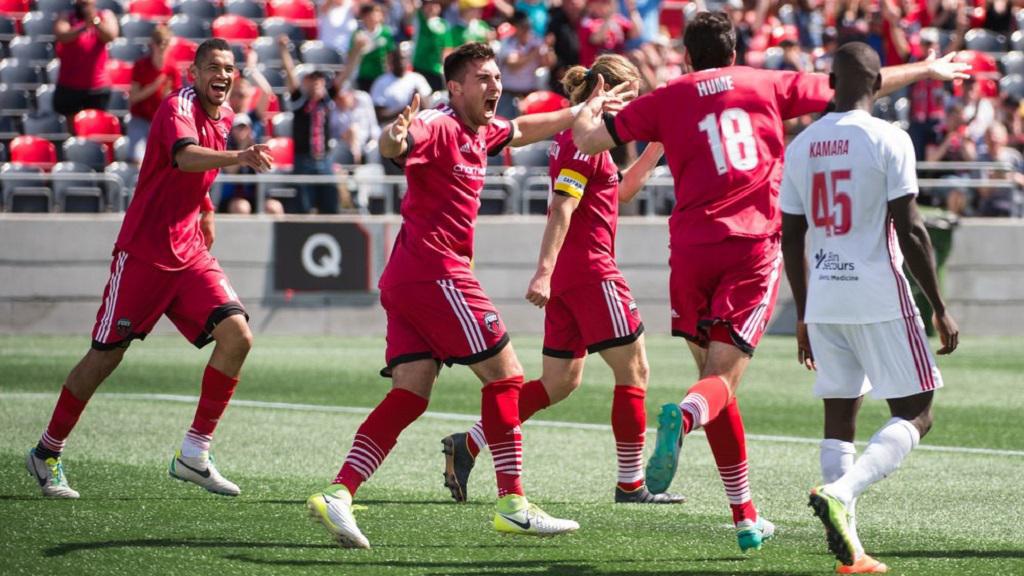 Ottawa posted an entertaining 5-3 victory against the Richmond Kickers on Saturday at TD Place. The fact that Richmond had not allowed more than one goal in a previous match this year put Ottawa’s accomplishment on a level similar to the Charleston Battery, for example, who posted five goals against the Rochester Rhinos earlier this year.

“It’s been my mission ever since I came here to have a team that scores goals, to play entertaining football,” Fury FC Head Coach Paul Dalglish said. “It takes time to get there, but I think you can see now on a consistent basis we’re creating chances and scoring goals, and it’s pleasing to see.”

“Paul told us in the beginning that it’ll be a hard-fought 90-minute game and that [the Kickers] are very good defensively,” said forward Tucker Hume, who scored the game-winning goal in the 73rd minute off of a Ryan Williams free kick delivery. “To put up five goals is impressive for us and it shows us that we've been working hard on our offensive game. It’s good to see five goals in any game. That said, most importantly for us was the three points.”

It wasn’t all smooth sailing for Fury FC, which couldn’t contain the Kickers’ Alhaji Kamara who notched the first hat trick ever recorded at TD Place. That said, Ottawa has generated plenty of its own in the final third of late, with Sito Seoane being the main catalyst in the first half with a brace.

Captain Lance Rozeboom fueled the second-half rally with his own rebound equalizer and Hume and Jimmy Shammar Sanon followed suit to cap off the organization’s best scoring output.

“Once again, this team showed great character, a hard-working mentality, and that’s what it takes to win games, especially in front of our fans,” Seoane said. “That’s what we want to prove for them ... work hard and the goals will come.”

Ottawa is in the midst of a hectic stretch, thanks in part to the success it has enjoyed in the Canadian Championship.

Fury FC hits the road on Wednesday to take on Major League Soccer’s Toronto FC in the second-leg semifinal match of the tournament. Ottawa holds the upper hand at the moment following a 2-1 win against TFC on Tuesday.

Repeating such a feat will be a tall order, but Fury FC has been able to produce on short rest, with the win against Richmond keeping the momentum going.

“This group of players, the mindset they’ve got, they surprise me every week because they leave it all out there,” Dalglish said. “To keep fighting and fighting after the game on Tuesday ... I couldn’t be more proud of them. It was another big win for us today, against a very good team.”