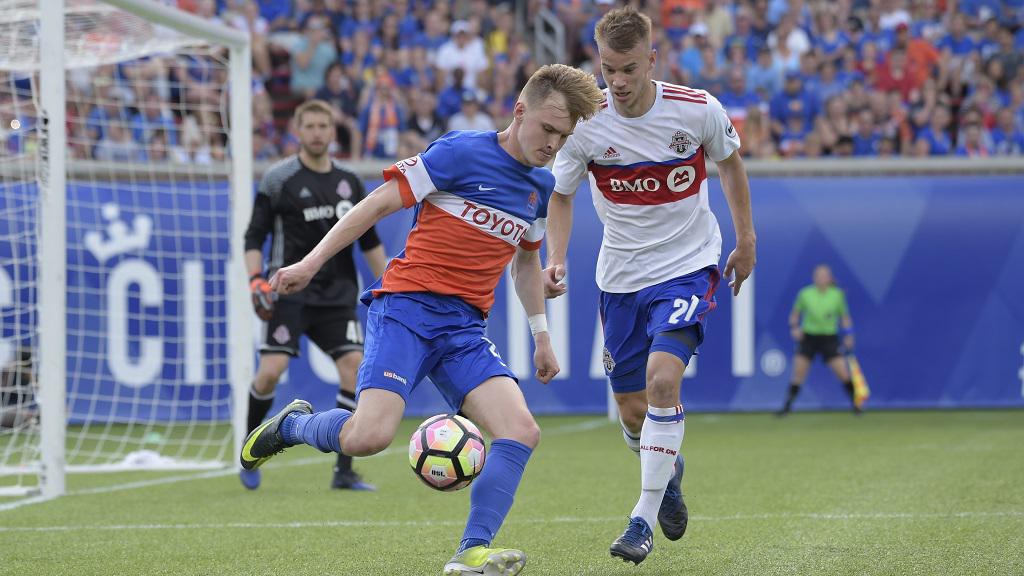 CINCINNATI – Danni König scored his third goals in the past two games as FC Cincinnati earned a 1-0 victory against Toronto FC II in front of 18,214 fans at Nippert Stadium on Saturday night. Neither side threatened much early, but Cincinnati (4-4-3, 15pts) took the lead in the 18th minute when a cross from the left by Tyler Polak got through the six-yard area and found Danni König at the back post for close-range header. Toronto (1-6-4, 7pts) began to look more dangerous as the half went on, and got a good chance to equalize when Shaan Hundal was slipped into the right side of the penalty area, only for FCC goalkeeper Mitch Hildebrandt to save. TFC II again went close early in the second half when a corner from the left came to Luis Pereira, and his shot from 14 yards deflected and was cleared off the line by Polak. Hundal then hit the post after being slid in behind the FCC defense after a good through-ball by Sergio Camargo in the 63rd minute, while FCC’s Austin Berry almost added to his side’s lead on a surging run forward after picking off a pass in the center circle. Toronto’s late pressure didn’t create a clear chance for an equalizer, though, as FCC earned back-to-back wins for the first time this season.

Tyler Polak, FC Cincinnati – Polak recorded the assist on the only goal of the game, and made a goal-line clearance to make it stand as the winner, as FCC earned victory.