Sets up meeting with Louisville, which romps to victory; Charleston, Rochester also through 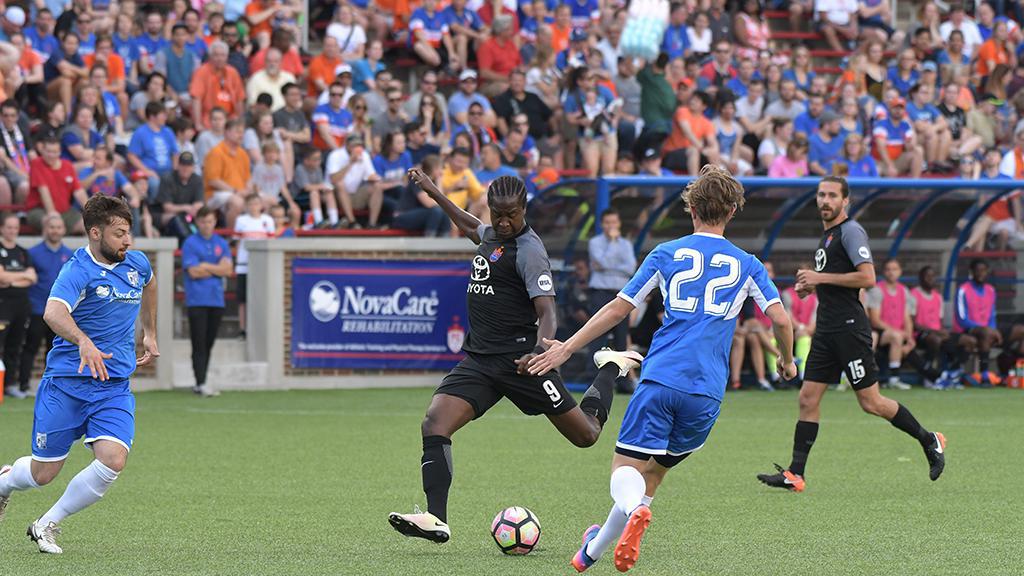 CINCINNATI – FC Cincinnati’s Djiby Fall scored with four minutes to go in overtime to take a 1-0 victory against AFC Cleveland in front of 12,790 fans at Nippert Stadium in the Second Round of the Lamar Hunt U.S. Open Cup on Wednesday night. The victory sets up a Third Round contest against FCC’s River Cities Cup rivals Louisville City FC on May 31.

FCC had the better of the run of play for much of the game, and Fall almost gave his side the lead in the 29th minute with a left-footed shot that went just wide. A give-and-go between Fall and Derek Luke saw a pair of chances eight minutes later, with Fall’s shot on the rebound being cleared off the line after Luke’s initial shot was saved.

Andrew Weidemen almost broke the deadlock for Cincinnati nine minutes into the second half, but his free kick went wide, but three minutes later the Royals almost grabbed the lead themselves as FCC defender Pat McMahon had to make a goal-line clearance from a corner. Weideman almost struck with three minutes to go, only for his effort to be palmed wide for a corner, and the game went to overtime.

FCC’s Kadeem Dacres produced another good save five minutes into the first period of overtime, while Fall also saw an effort four minutes later scrambled away. With the prospect of a penalty shootout to decide the contest closing in, though, Wiedeman’s far post cross found Fall for a headed finish to earn the hosts a dramatic victory.

LOUISVILLE CITY FC 9, TARTAN DEVILS OAK AVALON 0: Louisville romped to victory at Highmark Stadium against the qualifiers as Cameron Lancaster had two goals and an assists for the visitors. Mark-Anthony Kaye and Ilija Ilic also found the net in the first half, while Oscar Jimenez had a goal and assist in the second half to advance.

CHARLESTON BATTERY 2, ATLANTA SILVERBACKS 1: Charleston scored twice in the first half through Forrest Lasso and Jeffrey Otoo to earn victory against Atlanta at Silverbacks Park. Lasso opened the scoring off a free kick by Ryan Arambula in the 19th minute, and Otoo doubled the lead two minutes before halftime. Alex Harlley pulled a goal back for Atlanta from the penalty spot with 18 minutes to go, but the Battery moved on to face Jacksonville Armada FC in the Third Round.

ROCHESTER RHINOS 3, FC MOTOWN 0: The Rhinos scored twice in the opening 10 minutes and cruised to victory against FC Motown at Capelli Sport Stadium. Sofian Tergou opened the scoring only two minutes in, and Jochen Graf added a second in the eighth minute to give the Rhinos a comfortable lead. Rayane Boukemia added a third in the final 10 minutes to earn the Rhinos a home game against GPS Omens in the Third Round at Capelli Sport Stadium.

HARRISBURG CITY ISLANDERS 0 (6), OCEAN CITY NOR’EASTERS 0 (5): The City Islanders got a clutch save from Brandon Miller in the fourth round of the penalty shootout, and a seventh-round winner from Mouhamed Dabo to advance past the Nor’easters at Carey Stadium. Neither side was able to break the deadlock in regulation, but Ocean City took the upper hand in the shootout when Harrisburg’s Pedro Ribeiro missed in the first round. Miller got the City Islanders back on level terms in the fourth round with a save on Fraser Colmer, however, and after Ocean City missed to open the seventh round, Dabo put away his shot to earn a clash with another PDL opponent, Reading United AC, in the Third Round.

CHICAGO FC UNITED 3, PITTSBURGH RIVERHOUNDS 1: Mark Barlow and Ryan Sierakowski scored in the final 20 minutes to lead the Premier Development League’s United to victory against the Riverhounds at Hoyne Field. Chicago took the lead in the 19th minute through Mark Segbers, but the Riverhounds equalized as Kay Banjo found the net just before the hour-mark. Chicago pulled away late, however, to earn a place in the Third Round.

CHRISTOS FC 1, RICHMOND KICKERS 0: Christos FC scored with 11 minutes to go to earn the upset against the Kickers at City Stadium. Geaton Caltabiano scored the only goal of the game five minutes after Richmond’s Conor Shanosky had hit the crossbar, and while the Kickers had late chances to equalize they were unable to find a response.