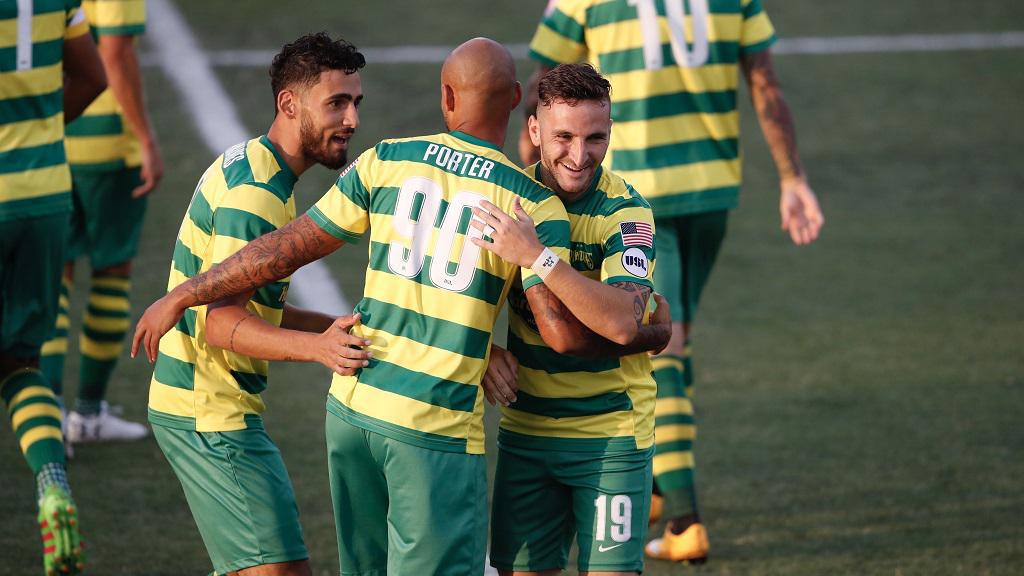 ST. PETERSBURG, Fla. – Kyle Porter and Alex Morrell tallied first-half goals and Martin Paterson added one midway through the second half as the Tampa Bay Rowdies jumped out to a good start in the 2017 Lamar Hunt U.S. Open Cup with a 3-0 victory against Jacksonville Armada U23 in the Second Round of the tournament at Al Lang Stadium.

Porter’s third-minute strike from the right flank and Morrell’s unassisted steal and finish helped Tampa Bay keep a comfortable distance, and Paterson’s sliding finish was the icing on the cake in advancing. With the victory, the Rowdies will face either the Premier Development League’s South Florida Surf (at Al Lang Stadium) or Miami FC (on the road at FIU Stadium in Miami) on May 31 in the Third Round.

Porter put the host side up in just the third minute when he booted a long-distance shot, recognizing that Jacksonville goalkeeper Juan Fajardo was well off his line. Fajardo rushed back and got a touch, but it was ruled that the ball crossed the line before he firmly collected in the six-yard area.

The Rowdies eventually added to their lead when Morrell took advantage of a Jacksonville turnover in the back. Morrell sprung to the left side of the box. He clearly was tugged by Armada defender Nurdin Hrustic, but Morrell maintained his attack and slotted his 43rd-minute shot into the right of the frame for a 2-0 lead heading into halftime.

It was a dominant performance from Tampa Bay, which had several chances to break the match open a bit earlier. One of the most noteworthy was Michael Nanchoff’s deep left-footed strike in the 21st minute, which forced Fajardo into a diving save to his left to concede a corner kick.

The Rowdies had a bit of a scare when leading goal scorer Georgi Hristov was a little dazed following an Armada free kick in the 27th minute that Hristov headed away off the wall. Hristov shook it off and continued the match, but he was replaced with Darwin Jones to open the second half.

Jones ended up assisting the Rowdies’ third goal with a strong run and cross from the right side. Paterson slid in for the finish at the edge of the six-yard area to push the lead to 3-0 in the 69th minute.

Tampa Bay played with a man advantage for nearly the final half hour as Armada midfielder Dener Dos Santos was sent off in the 62nd minute for a hand to the face of Morrell.

A league-record 18 USL teams are competing in this 104th edition of the U.S. Open Cup. The other 17 sides open the Second Round on Wednesday night.