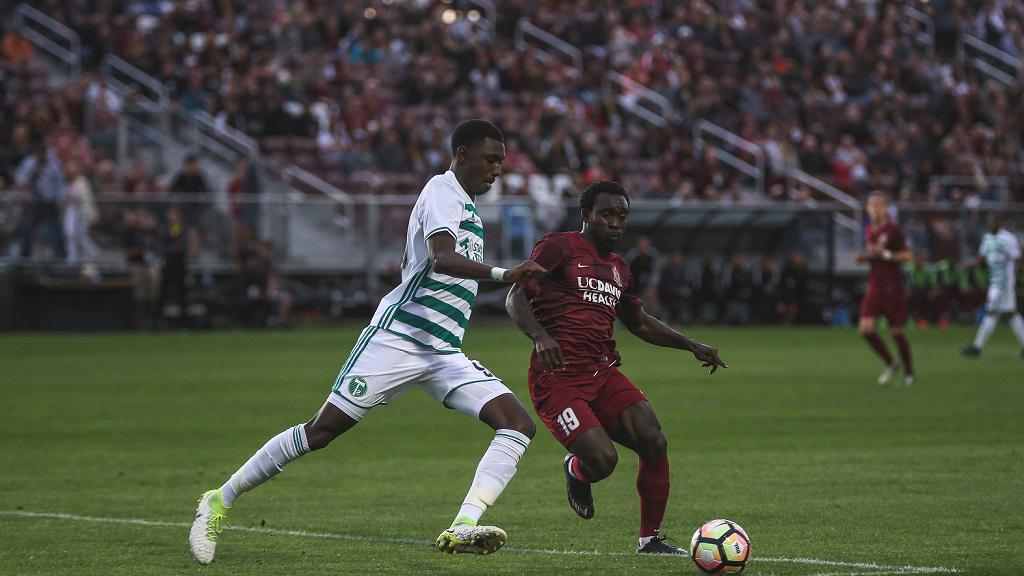 SACRAMENTO, Calif. – The Portland Timbers 2 have spent the first month of the 2017 season in a position for some promising results. With five consecutive one-goal defeats, T2 has been waiting to get over that hump.

A sold-out Papa Murphy’s Park probably seemed like one of the more unlikely locales for this trend to change, but Portland met the challenge head-on.

With Villyan Bijev and Victor Arboleda providing the scoring and backup goalkeeper Wade Hamilton earning the clean sheet, Portland (1-5-0, 3 points) emerged with a 2-0 victory in front of a Sacramento crowd of 11,569.

“The result was very good,” Portland Head Coach Andrew Gregor said. “It’s never easy to go down to play at Sacramento. They have a good, experienced team. I thought we did a good job of managing the game on the road and taking advantage of our opportunities when they were there.

“Overall, I thought there were some very good performances in a tough environment to go down to.”

Bijev’s first-half penalty kick proved to be the difference, and defensively Portland managed the game well in the absence of Kendall McIntosh, the USL’s saves leader who was called into the Major League Soccer side’s 18-man roster this weekend.

“As the season goes on, I don’t think you’re going to see many teams winning at Sacramento,” Gregor said. “We’ve got to get back to work next week and continue to get better. It’s one game. We still have plenty of games left, but I think it’s a good confidence builder for these guys to know that the work they’ve been putting in was rewarded tonight.”

Portland will be hoping things carry over into Friday night as T2 hosts Western Conference-leading San Antonio FC, which opened its Pacific Northwest swing with a 2-1 victory at Vancouver Whitecaps FC 2. San Antonio has won both of its road matches thus far this season, opening the year with a 1-0 win at Rio Grande Valley FC.

“San Antonio is top of the league right now and they’re a good, experienced team,” Gregor said. “We’re going to have to go out and perform well to get a result that we want. Not much changes. We’ll move on, continue to get better and take it game by game.”