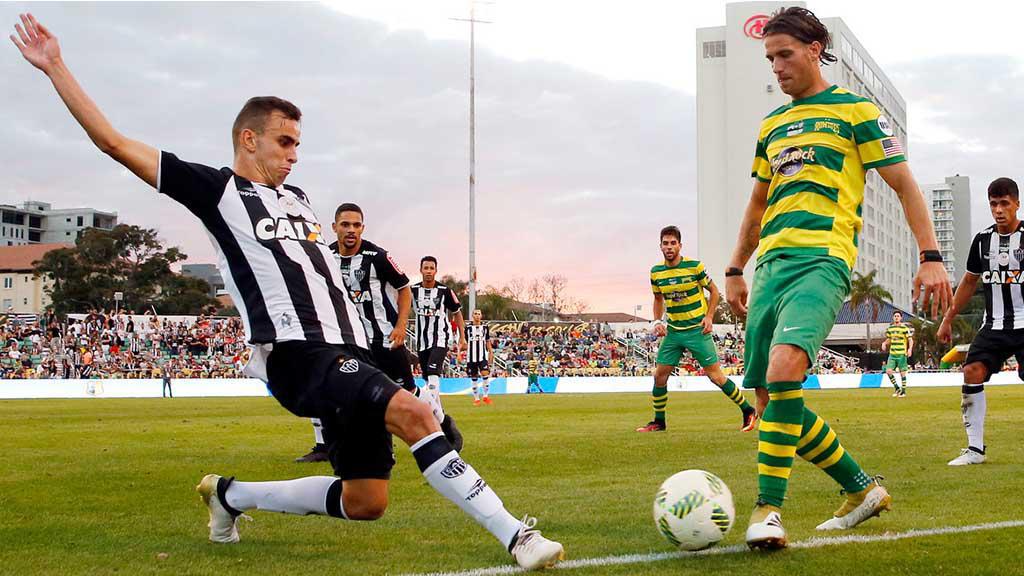 ST. PETERSBURG, Fla. – Atletico Mineiro scored early in either half as it took a 2-0 victory against the Tampa Bay Rowdies to conclude the 2017 Florida Cup on Saturday afternoon at Al Lang Stadium. Leonan and Rodrigo Prado both scores for the visitors to even their record at 1-1-0 for the tournament as they return to Brazil.

Atletico struck in the seventh minute with a lightning-fast counter-attack off a Rowdies’ free kick. Leonan carried the ball forward in the left channel, and played in Joao Vitor as he surged toward the top of the penalty area. Vitor’s initial shot was saved by Rowdies goalkeeper Matt Pickens, but Leonan followed through to lift the rebound into the net for the early lead.

Tampa Bay got back into the game quickly, and created its first shooting chance in the 17th minute. Zac Portillos took the ball on an overlap down the left and cut back to beat two defenders, and then sent a pass centrally for Martin Vingaard, whose effort from 25 yards was saved by the left post by Mineiro goalkeeper Ulison Pedruzzi.

The Rowdies continued to have the better of possession, but were unable to find a way through Atletico’s defense for a good look at goal. The next clear chance came to the visitors instead, as a long ball forward found Vitor on the right, and he cut into the penalty area and fired low past the near post. Leonan then forced a good save from Pickens in the 32nd minute with a free kick from the right that the Rowdies goalkeeper turned wide.

Atletico had a chance in stoppage time to add to their lead, only for Leonan’s curling effort from a free kick 25 yards out to go just wide of the right post. Vitor and Leonan also had shots go wide early in the second half for the visitors as they looked to bolster their advantage, and seven minutes in they had it as Rodrigo Prado’s header off Patric Cabral’s free kick from the right found the near post.

The Rowdies came close to hitting back four minutes later when a good build-up came to recent signing Luke Boden on the left, and his chipped cross to the back post found Alex Morrall. The former Chicago Fire midfielder’s volley flashed back across goal, but trialist Jaime Siaj was unable to turn in on frame as his header looped over the crossbar.

Michael Nanchoff also had a clear look on goal for Tampa Bay with 18 minutes to go, but pulled his shot wide of the right post from the left channel. Tam Mkandawire and Siaj also went close with headers from a pair of corner kicks, but the Rowdies were unable to find the target with either chance. The hosts were unable to pull a goal back, however, as Atletico held firm.