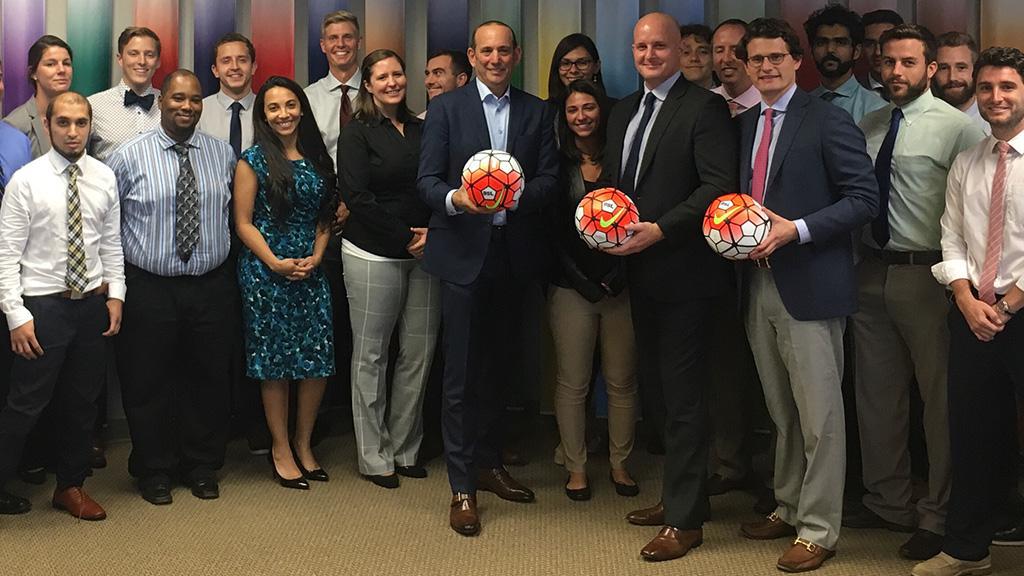 TAMPA, Fla. – Major League Soccer Commissioner Don Garber visited the USL offices last week while in Tampa to be a guest speaker at the University of South Florida’s Sports & Entertainment Lecture Series, and was enthused by the welcome he received from the league’s staff.

“As I walked around the halls today and see the great offices and see the trophies on the wall and see a lot of young, ambitious, energized people, it fills me with pride,” said Garber. “This is a really impressive organization that is helping to make our country a more competitive soccer nation.”

The partnership between the USL and Major League Soccer that began at the start of the 2013 season has grown exponentially over the past four seasons, with the New York Red Bulls II making history as the first MLS owned-and-operated club to win the USL Cup just over a week ago.

Seeing the manner in which players who could be key players in MLS in the future get the chance to hone their craft in a competitive environment in the USL has been gratifying for Garber.

“In order for us to be one of the top leagues in the world, we’ve just got to get a focused plan to improve our quality of play,” he said. “Our relationship with the USL is a key component of that. I believe sitting here today our league is better, significantly better, because of that relationship.”

The USL has also had its own success stories emerge, with players like the LA Galaxy’s Daniel Steres, Colorado Rapids’ Micheal Azira and the Philadelphia Union’s Richie Marquez all getting significant minutes in the USL before emerging as starters for their respective teams in MLS.

“I don’t think those players would be playing first-team soccer if it wasn’t for the experience and competitive environment they were in with the USL, full stop,” said Garber. “The USL is a competitive league, and as you can see while we had one of our clubs win the championship, it was not an easy ride for any of these players, and that’s what we need. They need to be playing in front of big crowds, they need to be performing with guys that are trying to nick at their heels and prove that they too are capable of playing for an MLS team.”

As the league’s commissioner since 1999, Garber has seen much change in the soccer landscape in the United States and Canada, and not only in MLS. In the same manner has he and his team has helped raise MLS to its current levels of success, Garber believed something similar was possible when NuRock Holdings, led by USL Chairman Robert Hoskins and CEO Alec Papadakis, acquired the league seven years ago.

“I can remember when Alec and [Rob Hoskins] were talking about investing in, and ultimately managing, the USL, and I knew that boded well for the future of this league,” said Garber. “They are experienced professionals who have decades of soccer experience, if not longer if you count the time when [Alec] was a collegiate player and professional player.”

With both leagues now forging forward, the partnership between the USL and MLS appears set to go from strength to strength.

“I see this relationship not just continuing, but growing and even getting better,” said Garber.