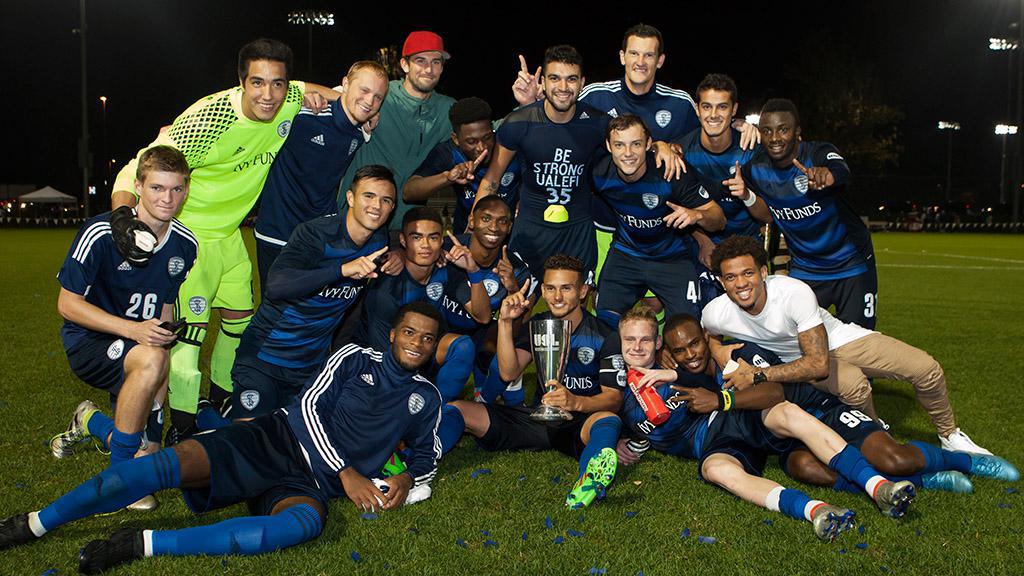 But when it came down to it, Tyler Pasher was still able to contribute in the attacking third as his two assists helped the Rangers take a 3-0 victory against Vancouver Whitecaps FC 2 on Saturday night to claim their first USL Western Conference Championship.

“Pasher is a player that, if he keeps his head right and if he sticks to everything he’s learned this year, and he’s matured so much, I think he’s a special player,” said Dos Santos following the contest. “So having Pasher playing as a left back, he knows the position well and he plays it well.”

Moving into the left back position after starting as the left winger in the Rangers’ 4-3-3 formation a week ago against the Blues, Pasher’s willingness to push forward to join the attack played a major role in the Rangers’ victory.

Both of Swope Park’s opening two goals came from low crosses delivered from the left, as its decisiveness in the final third allowed Kris Tyrpak to score twice before the halftime break to move the hosts toward victory at Children’s Mercy Victory Field.

“I was in the right place at the right time,” said Tyrpak. “Everybody did the hard work for me, so kudos to those guys. We didn’t play the greatest for the first 15 minutes but the goal turned the tide for us and helped give us a little confidence. That was huge for us.”

Swope Park captain Christian Duke helped set up the first goal, as his surging run into the penalty area and low cross gave Mark Anthony Gonzalez a near-post chance. Vancouver goalkeeper Spencer Richey made an excellent initial save, but could do nothing to deny Tyrpak after he gathered the rebound and fired into the right corner of the net in the eighth minute. For local standout Duke, leading the side to victory in front of his family was a special moment.

“The city deserves it,” Duke said. “Obviously, this is my home and I had my family here tonight. It’s a pretty humbling experience and I’m just happy that we’re on the right side of the scoreboard.”

Opposite Pasher on the back line was Jonathan Grant, who marked his 23rd birthday with a victory as he got the nod at right back. Grant was used sparingly in the regular season as most recently Tommy Meyer had been a consistent presence at fullback for the side. But after Meyer’s red card against the Blues last week, Grant stepped in and epitomized what has become the calling card of this Rangers side with a fine display.

“Everyone wants to fight for each other,” said Duke. “Everyone wants to leave all their blood and sweat on the field. Everyone is ready for this opportunity. Marc Dos Santos does a great job and Nikola [Popovic] makes sure everyone is prepared. He kept on saying throughout the whole year, ‘You guys never know when you’ll step in. You’ve got to be ready for the opportunity.’ These young guys are stepping up.”

The Rangers will now wait to see who they will face in the 2016 USL Cup Final, Presented by Nike, as the New York Red Bulls II and Louisville City FC square off in Sunday’s Eastern Conference Final at Red Bull Arena.

After a makeshift lineup extended the club’s winning streak to seven games on Saturday night, though, Dos Santos is confident whoever gets the call will be ready to rise to the challenge.

“I’ve been telling these guys one thing; we are a team and everybody is important,” said Dos Santos. “The collective is more important than the individual. So depending on who’s in or who’s out, the guys always answer in the right way.”