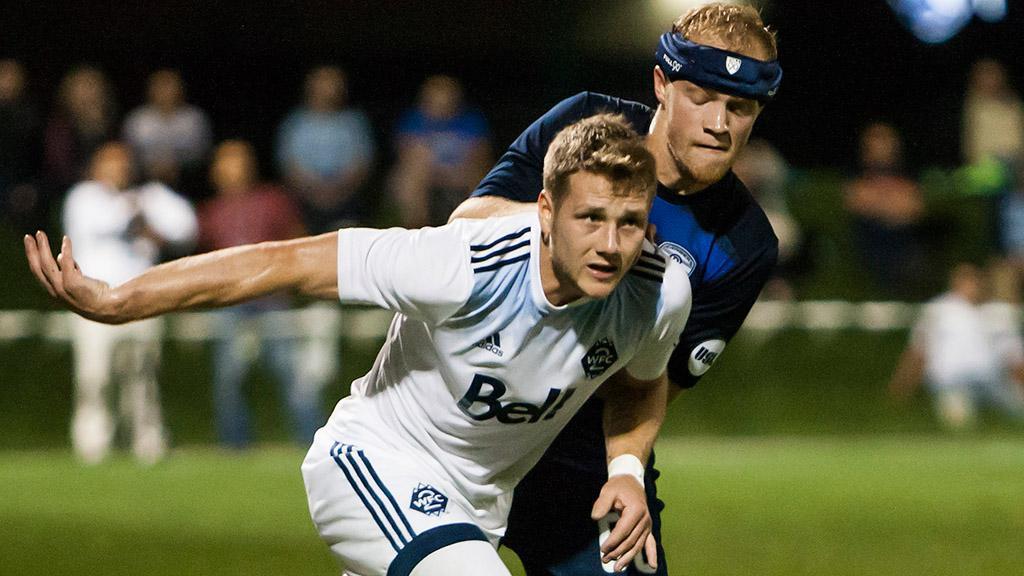 KANSAS CITY, Mo. – On the face of it, Vancouver Whitecaps FC 2 had control over the game early against the Swope Park Rangers in the Western Conference Final of the 2016 USL Cup Playoffs.

The visitors at Children’s Mercy Victory Field had the bulk of possession, and were forcing the Rangers into nervous giveaways that saw the hosts put on the back foot early on Saturday night. But by the end of the first half, it was the Rangers who had a two-goal advantage, as WFC2 had yet to register a shot on goal.

“We were disappointed with how we played in the first 45 minutes,” said WFC2 Coach Alan Koch. “I know we possessed the ball well, but we really fell into what they wanted us to do. We kept the ball, but we didn’t really go anywhere with it, and we didn’t create enough opportunities, and allowed them in transition to come at us, and then they scored a couple of goals.”

Those two goals, both by Kris Tyrpak, sent the Rangers on their way to a 3-0 victory, and a place in the 2016 USL Cup Final, Presented by Nike, next Sunday night against the winner of Sunday’s Eastern Conference Final between the New York Red Bulls II and Louisville City FC. As disappointing as the loss was for Koch, the resilience his side showed in the second half left him pleased as the players stared down a tough bid for a comeback.

After missing the postseason in the club’s inaugural season, WFC2 took a major step forward even to reach this point. One of the Western Conference’s leaders for much of the season, a late slide left the club with the No. 6-seed for the playoffs, but wins against the veteran squads of Colorado Springs Switchbacks FC and OKC Energy FC saw the side regain its confidence as it reached the conference final.

Add in the success the club has had in pushing players forward individually – from the contributions to the club’s success in the CONCACAF Champions League to Brett Levis’ and Alphonso Davies' additions to the Whitecaps’ MLS squad in midseason – 2016 can only be looked at as an unqualified success for the club.

“Obviously, you get 30 games in the USL this year and 32 next year where we get an opportunity to play our young players, and that’s part of what we’re trying to do, that’s our mandate, but for our young players, and the entire group, to get to the postseason is an amazing achievement for the guys,” said Koch. “If we really reflect – as difficult as it may feel to do it right now – we’ve got an awful lot to be proud of, not just during the regular season, but also through these three playoff games too.”

With one of the youngest squads in the USL, there’s the potential for even more to come when the 2017 USL season kicks off in Vancouver.

“I’m about to go in and let them know how I feel, and we’ll reflect on the entire season, we won’t just reflect on tonight. We’ve come a long, long way,” Koch said. “Obviously, after our first year we learned a lot, we made some adjustments, we addressed it. We achieved the goal of making the playoffs, which was huge, and I think we’ve gone further than many, many people would have expected us to go, so I’m very, very proud of every one of those guys.”