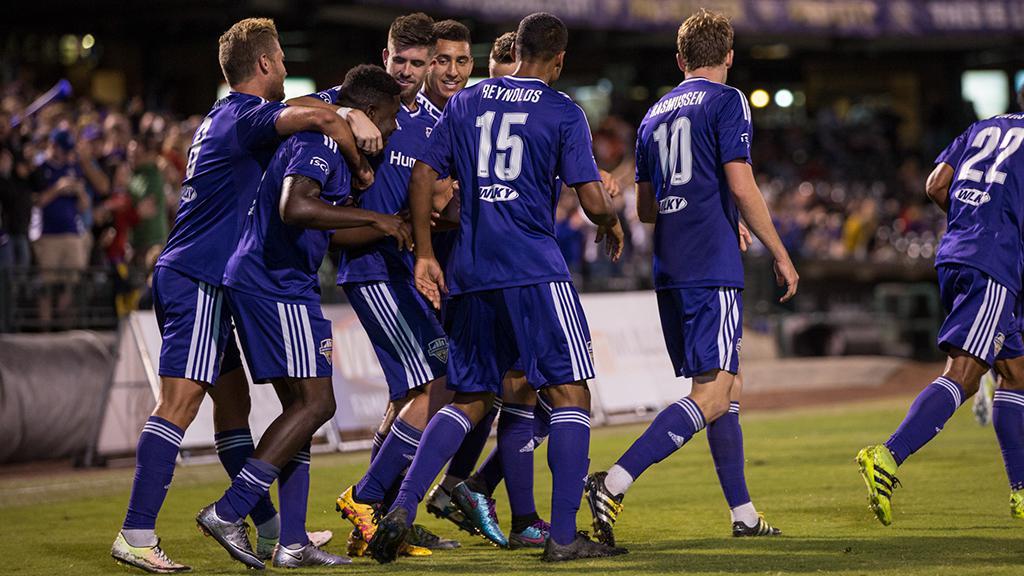 LOUISVILLE, Ky. – In its opening game of the 2016 USL Cup Playoffs, it took Louisville City FC time to hit its stride on the way to an overtime victory.

On Saturday night, in front of 6,581 fans at Slugger Field, the difference was marked, as the hosts took the game to the Charleston Battery from the opening kickoff, and emerged with a 1-0 victory as Kadeem Dacres’ finish booked a return to the Eastern Conference Final.

At the forefront of the performance was Dacres, who was lively from the opening minutes. Playing with the freedom to drift in from his wide position regularly, the 25-year-old combined well with fellow attacking midfielder Magnus Rasmussen, and almost created a chance with a nifty backheel flick to Chandler Hoffman that was laid back to Rasmussen at the top of the penalty area, only for the shot to be closed down.

Dacres went close to opening the scoring in the 34th minute, too, as his low shot from 25 yards for the left corner was turned around the post by Battery goalkeeper Alex Tambakes. But eight minutes into the second half he found the breakthrough as a clever chipped pass over the top by Sean Reynolds put Dacres in on the right side of the penalty area, and his low finish found the net.

“I had a tough angle, and I didn't really see anyone in the middle at the time,” Dacres said. “My whole thought process behind it was just striking it on target.”

The Battery threatened at times, particularly from set pieces, but as the game wore on, Louisville maintained more possession, and effectively closed out the game. Goalkeeper Greg Ranjitsingh was called on three times to make decisive stops, twice denying Battery leading scorer Romario Williams as good chances presented themselves, but after City took the lead, the visitors’ chances were few and far between.

“I thought we had some quality passages of play -- just couldn't quite get the shot off quickly enough, and they defended really well,” said O’Connor. “Had some good blocks, and Greg [Ranjitsingh] made some really big, important saves for us at the right time.”

The victory booked a clash with the New York Red Bulls II next Sunday for a place in the USL Cup Final, Presented by Nike, and the opportunity for Louisville to try and solve a side that has been a thorn in their side in each of the club’s two seasons. New York has taken victory in all four of the meetings between the teams so far, a fact that isn’t lost on City’s players.

“It's definitely something all of us have in the back of our mind,” Reynolds said. “Of course, tonight was all about Charleston. It's like a bug. It's like a chip on the shoulder. You've been beaten four times by the same team, and you want some revenge.”

Should Louisville come out as sharply as it did against the Battery on Saturday night, the clash at Red Bull Arena promises to be a must-see.

"They played good football all season, and we always knew they were going to be up there,” said Dacres. “We're pretty much ready for them. They're the top team, and they're doing well. We respect them, but we'll have something ready.”