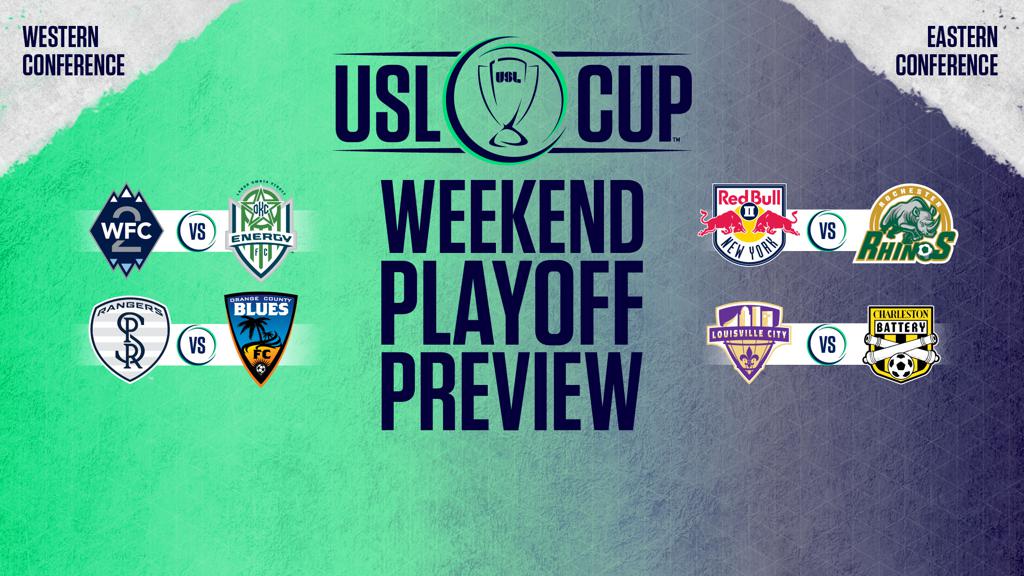 GAMES TO WATCH
Eastern Conference Semifinals
Friday, October 7
No. 1 New York Red Bulls II vs. No. 4 Rochester Rhinos
Kickoff – 7 p.m. ET | Red Bull Arena | Match Center
The Red Bulls II and Rochester Rhinos renew what is developing into a tense rivalry for a second consecutive season in the Eastern Conference Semifinals, after the Rhinos took a 2-0 victory this time last season at Rhinos Stadium on their way to the championship.

New York cruised through its opening game of the postseason with a 4-0 win against Orlando City B as Aaron Long scored twice off set pieces, and Vincent Bezecourt added a goal and assist to continue his strong recent run of form. The Red Bulls II have never defeated Rochester, however, with the sides having drawn each of the three occasions they met in the regular season.

The Rhinos also had little difficulty in opening their title defense with a win, taking a 3-1 victory against the Charlotte Independence. Rochester got goals from Wal Fall, Steevan Dos Santos and Sofiane Tergou to earn a solid victory, and now will try to maintain their upper hand over the regular-season champions.

Louisville needed overtime in its opening game of this postseason to advance past the Richmond Kickers, but goals by George Davis IV and Chandler Hoffman in the additional 30 minutes gave the side a victory. Hoffman’s tally ended a 10-game goal-scoring drought and should allow City to enter with confidence it can book a second consecutive trip to the Conference Final.

Charleston recorded the Eastern Conference’s only upset of the opening round as it rallied to take a 2-1 victory on the road against FC Cincinnati in front of 30,187 fans at Nippert Stadium. After falling behind to an outstanding strike by FCC’s Eric Stevenson, the Battery got an equalizer before halftime by Chris Tsonis, and a second-half own goal off a header by Zach Prince, to stun the USL Cup Playoffs record crowd and keep the club’s hopes of adding to its 2012 title alive.

WFC2 went behind early against Colorado Springs Switchbacks FC, but rallied for a 2-1 win as goals by Kyle Greig and Kianz Froese earned a victory at Switchbacks Stadium. A former player for Energy FC, Greig is coming back into form of late, with two goals in his past three games, and has provided veteran leadership for the young WFC2 squad.

Energy FC grabbed a victory from the jaws of defeat in its opening contest, as two stoppage-time goals by Colin Bonner saw OKC stun second-seeded Rio Grande Valley FC with a 3-2 victory on the road in South Texas. Linus Olsson scored the opening goal for Energy FC, but the side still trailed as the game entered the first minute of second-half stoppage time, only for Bonner’s late heroics to book a return to the Conference Semifinals.

Sunday, October 9
No. 4 Swope Park Rangers vs. No. 8 Orange County Blues FC
Kickoff – 4 p.m. ET | Children’s Mercy Victory Field | Match Center
The Swope Park Rangers were the only home side to take a victory in the Western Conference on the opening weekend of the postseason and now face an Orange County Blues FC side that is aiming to build on a dramatic penalty shootout win that saw the club earn its first playoff victory in its history.

The Rangers eliminated last season’s Western Conference champions the LA Galaxy II with a 3-0 win in the opening game of the playoffs, but the game was a lot closer than the final score indicated. Kris Tyrpak’s goal opened the scoring with under 20 minutes to go, while Mark Anthony Kaye scored twice in stoppage time as Los Dos chased the game late on.

Orange County, meanwhile, dispatched Northern California rival and top-seeded Sacramento Republic FC 5-4 in a penalty shootout after the teams had played to a 0-0 draw at Bonney Field last Saturday night. Didier Crettenand scored the decisive fifth goal from the spot, as Blues goalkeeper Josh Cohen made the crucial save in the third round to give the underdogs the edge. 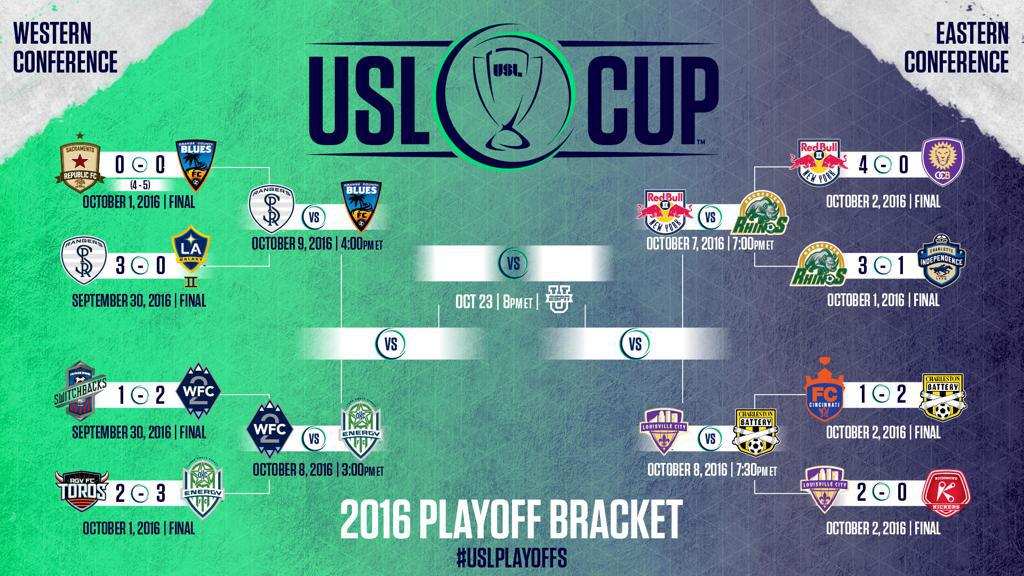 10 – Richmond Kickers goalkeeper Andrew Dykstra earned USLSoccer.com Man of the Match honors after an impressive 10-save performance to force overtime for the shorthanded Kickers during their 2-0 loss to Louisville City FC in the Eastern Conference Quarterfinals. That is twice as many saves as the second-place men in this category as Dykstra’s counterpart – Louisville’s Greg Ranjitsingh – and Orlando City B’s Mark Ridgers came up with five in the opening round.

4 – During last week’s Eastern Conference Quarterfinal win, the New York Red Bulls II’s 4-0 effort against Orlando City B marked just the fifth occasion in which a team has scored four goals or more in a USL postseason match. NYRBII also became only the second organization to do so for a second time, following up its 4-2 win against the Pittsburgh Riverhounds during the 2015 USL Cup Playoffs. The other organization to accomplish this feat was 2013 USL Champion Orlando City SC, which earned a 5-0 win during the quarterfinals that year and a 7-4 victory against the Charlotte Eagles in the title game.

3 – The Rochester Rhinos’ 3-1 win against the Charlotte Independence last week matched their season-high scoring total in a game. The Rhinos tallied three goals in a game on three other occasions during the regular season.

0 – The Swope Park Rangers’ defense has posted a shutout four times during their five-game winning streak spanning the final four regular-season games and last week’s 3-0 win against the LA Galaxy II to open the USL Cup Playoffs. Swope Park’s defense had totaled only four clean sheets prior to this winning streak.

- The USL announced this week a three-year partnership with Opta Sports that makes the world’s leading provider of live, detailed sports data, to become the league’s Official Data Partner. The partnership will begin at this year’s 2016 USL Cup Final, Presented by Nike.

- A number of current USL players and alumni were called up for international duty this week as the final stage of Caribbean Cup Qualifying got underway. Two-time USL Most Valuable Player Kevin Molino was the star performer of the opening round of games, as he notched a hat trick in Trinidad & Tobago’s 4-0 victory against the Dominican Republic.

- One player who was originally slated to be on international duty was OKC Energy FC goalkeeper Cody Laurendi, who was called up by Puerto Rico for the first time. Laurendi decided to decline an invitation, however, so he could remain with the side for its Western Conference Semifinal against Vancouver.

- FC Montreal’s leading scorer this season, Anthony Jackson-Hamel, made his debut for Canada’s Men’s National Team on Thursday, as he came on as a substitute in a 4-0 win against Mauritania. USL standout Marco Bustos of Whitecaps FC 2 also appeared in the contest, the first of two for Canada in Morocco this week.