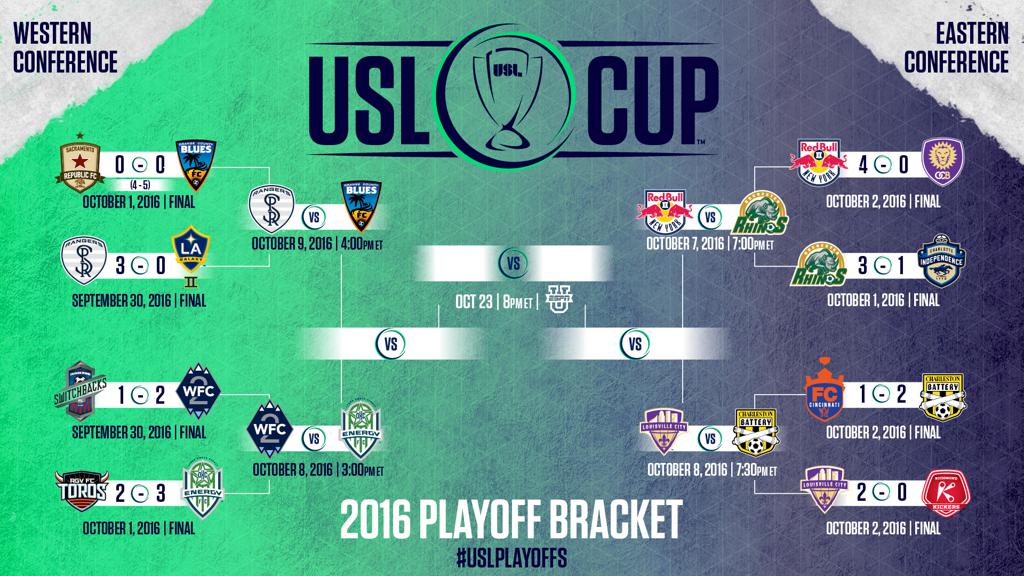 TAMPA, Fla. – The matchups for the Conference Semifinals in the 2016 USL Cup Playoffs were set on Sunday night after a record-setting weekend of action that saw four lower-seeded sides take victory on  the road, and FC Cincinnati set a new USL Cup Playoffs record as it welcomed a crowd of 30,187 to Nipper Stadium in its postseason debut.

The 2016 USL Cup will air live on ESPNU on Sunday, October 23 at 8 p.m. ET. Every other game of the 2016 USL Cup Playoffs will be available on the league’s Playoffs Center, with updates from across the league also available via Twitter, Facebook, Vine and Instagram.

The Western Conference saw the formbook turned on its head, with the No. 4-seed Swope Park Rangers the highest remaining seed in the conference after victories for No. 6-seed Vancouver Whitecaps FC 2, No. 7-seed OKC Energy FC and No. 8-seed Orange County Blues FC.

The Eastern Conference played out more conventionally, with the No. 1-seed New York Red Bulls II and No. 4-seed Rochester Rhinos both taking comfortable wins. No. 2-seed Louisville City FC needed overtime to advance, however, while the No. 6-seed Charleston Battery recorded the only upset as they defeated Cincinnati.