With season on the brink, Energy FC rallies past RGV in conference quarterfinals 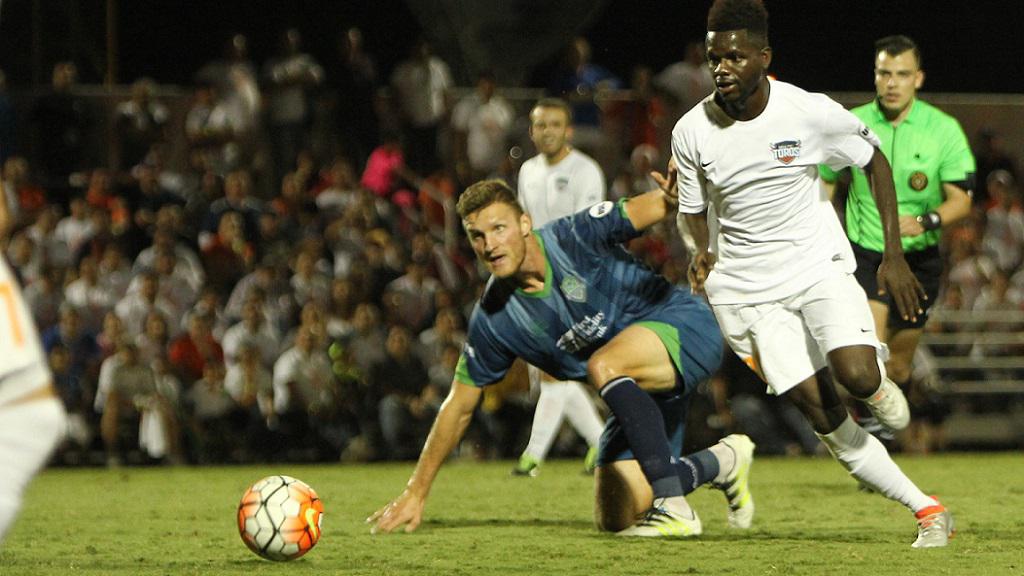 It is the maxim that any coach will tell a player at a ripe age: Play until the final whistle.

“It was good proof that you never give up before the whistle has gone from the referee,” OKC Head Coach Jimmy Nielsen said to Energy FC TV’s Brent Skarky. “We kept going. We kept trying. Rio Grande is a very good team and made it very difficult for us today. We had our problems. We fought through it and got that little bit amount of luck that we’ve been missing all year.”

With RGV carrying a 2-1 lead, Bonner propelled OKC down the stretch, first with a headed equalizer off of a deep Michael Harris throw-in from midfield and then a near post header off of Luis Martinez’s corner kick.

“A couple corner kicks before that, Luis put it near post and I told him to put it in that same spot,” Bonner said. “He put it on the money. I was going full speed, so if it was in front of me more or behind me, I wasn’t going to get a head on it. I have to give credit to my teammates on those.”

“He’s a beast in the air the last 20 minutes,” Nielsen said. “We kind of were hoping we could get some good service into the box and we scored off a throw-in. We scored off a corner kick in the end. He really put himself out there, especially on his first goal where he had to take a knock from the keeper as well – extremely brave by him. The second goal, [it was] a great service from Martinez and perfect timing on the run. We all went crazy when that happened.”

Bonner’s late presence was a massive statement for an Energy FC offense that has struggled all year. Nielsen made a strong, but necessary, decision to try and find a jolt in the attack as he brought on Bonner and Wojciech Wojcik to replace Danni Konig and Andy Craven.

Ultimately, the move to get Bonner into the final stretch paid off.

“It’s huge,” OKC defender Cyprian Hedrick said of Bonner. “Moments like that, you need someone to step up, and he stepped up. Anybody that saw the game can see how big his lift coming off the bench was for us.”

“We’ve been going through a tough patch the past six games and we’ve always believed in ourselves – the coaches have as well,” OKC midfielder Michael Thomas said. “It’s just proof that if you never give up, anything can happen.”

With the win, OKC will now hope to maintain that momentum when it faces sixth-seeded Vancouver Whitecaps FC 2 on Saturday, Oct. 8 (3 p.m. ET).

“We needed this game and this result for a little bit of time now,” Hedrick said. “I think now that we have it, we can ride this tide.”