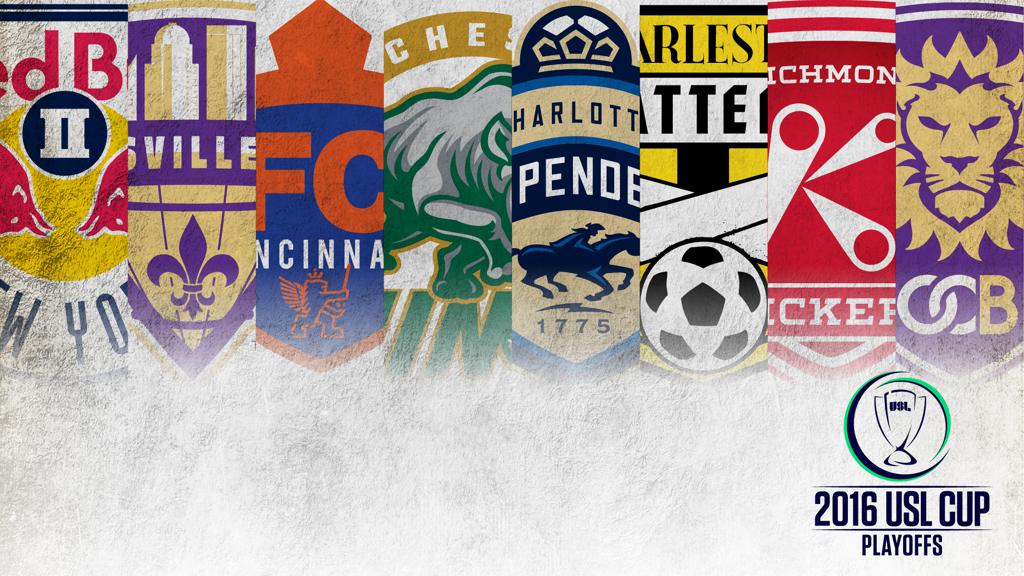 As a prelude to the quarterfinals, USLSoccer.com takes a look at the teams in the field and the keys to their postseason. Here is a look at the Eastern Conference field:

No. 1 New York Red Bulls II: The second-year New York Red Bulls II flexed their scoring muscle throughout the season and stepped it up another level come August to maintain an Eastern Conference lead they would never relinquish. NYRBII earned its first regular-season title and has advanced to the 2016 USL Cup Playoffs for a second consecutive season. The club certainly enters as the team to beat in the East, thanks to a variety of attacking weapons, including target forward Brandon Allen and playmaker Derrick Etienne Jr. They also set a number of single-season records, eclipsing the 2014 Orlando City SC side to establish new marks in points (69), wins (21) and goals scored (61) in regular-season play. Defensively, NYRBII had a remarkable year as well with 16 shutouts, one shy of the USL record of 17 set by the defending champion Rochester Rhinos in 2015. That is some impressive balance heading into a postseason.

No. 2 Louisville City FC: For Louisville City FC, 2016 has marked a second season, a second runner-up finish in the Eastern Conference and now a second opportunity to make a deep run in the USL Cup Playoffs. With some new pieces in the mix for its sophomore campaign, Louisville didn’t miss a beat and has performed admirably throughout the year, highlighted by an incredible 17-game unbeaten streak. The club’s form on the road also was solid to the tune of an 11-2-2 record. LouCity has been far steadier this year than in 2015, when the club lost four of its final five regular-season games, and the expectations among the roster and its supporters is for this team to once again be a viable threat to hoist the USL Cup when all is said and done.

No. 3 FC Cincinnati: FC Cincinnati made the loudest entrance the USL has seen with continual record-breaking attendances that have drawn global recognition, and the fans have been treated to a veteran-savvy club led by a National Soccer Hall of Fame coach. The first task was accomplished, reaching the 2016 USL Cup Playoffs. Now John Harkes’ side looks to keep this buzz going, and the club gets to do so on its home grounds of Nippert Stadium to open the Eastern Conference Quarterfinals. From the front line of attack in Sean Okoli to fan favorite goalkeeper Mitch Hildebrandt as the anchor, The Bailey will be bumping for this expansion franchise’s new chapter.

No. 4 Rochester Rhinos: The defending USL champion Rochester Rhinos are back in the postseason to attempt to reclaim their crown, and they enter the 2016 USL Cup Playoffs in good form with a nine-game unbeaten streak (5-0-4) and the opportunity to host an Eastern Conference Quarterfinal. Living up to the standards that the 2015 team set certainly haven’t been easy, and probably were not realistic anyway. A USL-record 17 shutouts in a 28-game slate a year ago is a nearly impossible ask within a league that gains more and more parity. Coach Bob Lilley’s side fought hard once again to put itself in a good position among the top of the Eastern Conference standings, and the Rhinos hope to rekindle their postseason magic a second time around.

No. 5 Charlotte Independence: The Charlotte Independence were a bit unfortunate to miss out on the postseason in their first season last year. The 2016 squad, however, left little doubt about its USL Cup Playoffs credentials. Coach Mike Jeffries’ side has shown some balance and depth among the roster, improving its road record by leaps and bounds while producing at a higher clip offensively. Charlotte opens the postseason on the road, and while a home quarterfinal match would have been ideal, the Independence could pose to be one of the more dangerous low-seeded teams in the playoffs.

No. 6 Charleston Battery: The regular-season stretch run for the Charleston Battery took a couple small hits as they ended up below a top-four finish in the Eastern Conference table. A stronghold member of the USL and a fixture in the USL Cup Playoffs having made the postseason every year of the league’s history, Charleston will need to do its damage on the road in the postseason. The Battery dropped two of their final three home matches to wrap up the regular season, but this veteran club caused some damage away from MUSC Health Stadium this season. In Charleston’s past 11 road matches, the club has posted a stellar 6-1-4 record. The Battery will hope that trend carries over when they head into enemy territory in Cincinnati.

No. 7 Richmond Kickers: The Richmond Kickers have been a staple to advance to the USL Cup Playoffs. They have done so now for six consecutive USL seasons. Richmond’s 2016 campaign has had some swings to it, though. On the positive side, the Kickers made a significant move up the table thanks to a six-game winning streak from July through early August. On the flip side, Richmond has hobbled a tad since clinching a postseason berth and will need to regain the form it demonstrated during the dog days of summer.

No. 8 Orlando City B: Orlando City B made things far more difficult on itself with a winless streak that never seemed to end. For weeks, it appeared to be a forgone conclusion that Orlando would attain a spot in the 2016 USL Cup Playoffs. An eight-game winless streak (0-7-1) and five-game losing streak later, the season was in the balance, but OCB stepped up with a 2-0 win against Bethlehem Steel FC in the regular-season finale to gain the necessary points for a No. 8 seed in the Eastern Conference. Orlando certainly has some individual talent, and now that the postseason is here, it will need to coalesce into a united group if it is to overcome a massive test in the conference quarterfinals.

FOLLOW THE USL
The 2016 USL Cup will air live on ESPNU on Sunday, October 23 at 8 p.m. ET. Every other game of the 2016 USL Cup Playoffs will be available on the league’s Playoff Center, with updates from across the league also available via Twitter, Facebook, Vine and Instagram.