New York, Sacramento enter postseason as No. 1 seeds in East and West 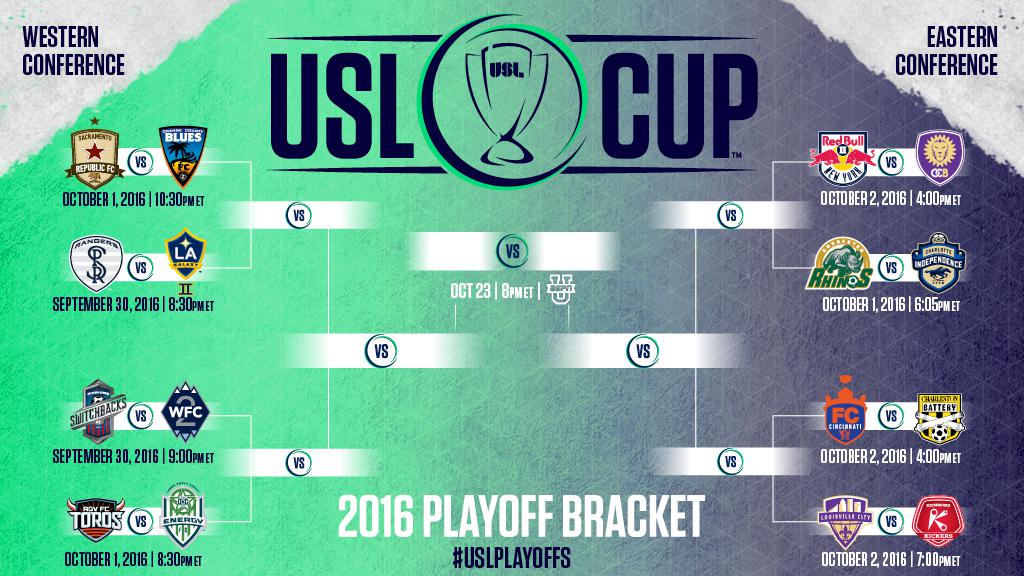 TAMPA, Fla. – The field for the 2016 USL Cup Playoffs was completed on Sunday afternoon with 16 teams set to kick off the postseason next weekend in the Eastern and Western Conference Quarterfinals. The New York Red Bulls II and Sacramento Republic FC enter the playoffs as the No. 1 seeds in the East and West, respectively, while Orlando City B and Orange County Blues FC claimed the final available berths in either conference on a dramatic final weekend of regular-season action.

The 2016 USL Cup will air live on ESPNU on Sunday, October 23 at 8 p.m. ET. Every other game of the 2016 USL Cup Playoffs will be available on the league’s Match Center, with updates from across the league also available via Twitter, Facebook, Vine and Instagram.

The Western Conference saw numerous twists and turns on Saturday night as the field was set, and the Swope Park Rangers joined Sacramento, Rio Grande Valley FC and Colorado Springs Switchbacks FC in earning the right to host a conference quarterfinal. The No. 4-seed Rangers will host the No. 5-seed LA Galaxy II in the opening game of this season’s playoffs on Friday night at 8:30 p.m. ET, while the No. 3-seed Switchbacks will also open the playoffs on Friday night at home to No. 6-seed Vancouver Whitecaps FC 2 at 9 p.m. ET.

The defending USL champion Rochester Rhinos will kick off a tripleheader of action on Saturday night in the opening game of the Eastern Conference Quarterfinals as the No. 4-seed Rhinos welcome the No. 5-seed Charlotte Independence to Rhinos Stadium for a 6:05 p.m. ET kickoff.

Action then switches to the Western Conference as No. 2-seed Rio Grande Valley FC hosts No. 7-seed OKC Energy FC for a regional rivalry clash at 8:30 p.m. ET in its first postseason contest. The night concludes as No. 1-seed Sacramento Republic FC hosts No. 8-seed Orange County Blues FC at Bonney Field at 10:30 p.m. ET after the Blues jumped past the Portland Timbers 2 on goal differential to clinch the final playoff berth in the West on Saturday.

The focus switches back to the Eastern Conference on Sunday, as the No. 1-seed New York Red Bulls II play host to No. 8-seed Orlando City B at 4 p.m. ET, and No. 3-seed FC Cincinnati welcomes the No. 6-seed Charleston Battery to what is expected to be a raucous Nippert Stadium. The weekend’s action concludes that night as No. 2-seed Louisville City FC hosts No. 7-seed the Richmond Kickers at Louisville Slugger Field at 7 p.m. ET.