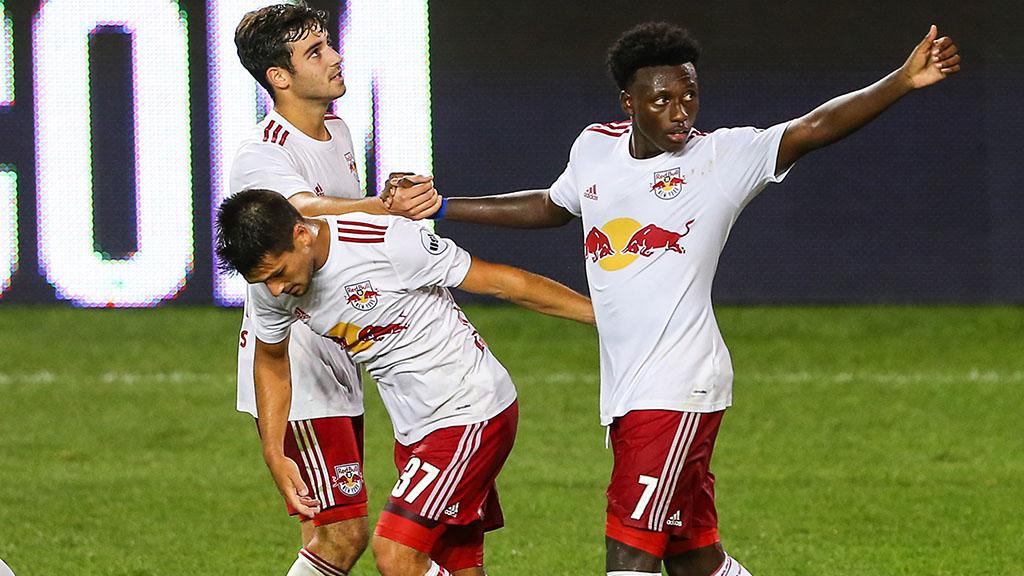 After the Rochester Rhinos lost just once on their way to claiming the 2015 USL Regular Season Championship and the 2015 USL Cup, there was a valid question as to whether the side’s accomplishment merited consideration for the best season in USL history.

The New York Red Bulls II might not match last season’s Rhinos in the goals-conceded category, but after the side’s 4-0 victory against FC Montreal last week, Coach John Wolyniec’s side has become one of the league’s all-time strongest.

New York combines both the defensive stinginess of the Rhinos with the attacking flair that was brought to the USL by Orlando City SC two seasons ago. While the Red Bulls II can’t match Rochester’s goals-against record from a season ago, it could match the 17 shutouts the Rhinos posted in 2015 with one more on Saturday against Charleston.

While Rochester was a solid side in attack, however, the final third is where this year’s Red Bulls II have been far superior. With their pressing style, emulating that of the club’s MLS side, the Red Bulls II have struck 59 times in the regular season, a new high for a season. While New York does have the advantage of two additional games in its schedule, it certainly appears a match for Orlando’s potent attack that notched 56 goals, led by MVP Kevin Molino.

New York has also surpassed that Orlando side in wins, and total points – a mark that was achieved in 28 games – and now has a remarkable plus-39 goal differential. The side’s 12 road wins far outstrip any side in league history, too, with Brandon Allen in contention for a Golden Boot as well with his 14 tallies.

Of course, as we found out with Orlando, those types of records don’t always matter when the playoffs arrive. But with one game to go, the Red Bulls II’s accomplishments should stand on their own as one of the most remarkable seasons in USL history.

1. New York Red Bulls II (Previous: 1)
Last Week: W 4-0 vs. FC Montreal
The Red Bulls II not only have the regular season championship, they now have multiple entries in the USL record book. New York’s impressive win against Montreal saw the side set a new high for total wins (20) and total goals (59) to go with its previous record marks of most points and most away wins in a season. One more shutout, and New York will also match Rochester’s 17 clean sheets from a season ago.

2. Louisville City FC (Previous: 2)
Last Week: W 5-1 at Saint Louis FC
A guaranteed No. 2 seed, and retaining the Kings’ Cup against Saint Louis, made for a good away day for Louisville, which now enters its home finale with nothing on the line except pride. With the Charlotte Independence still fighting for a home playoff game, though, it would be a surprise if an understrength team awaits them as Louisville looks to maintain its momentum going into the postseason.

3. Colorado Springs Switchbacks FC (Previous: 4)
Last Week: W 2-1 vs. Seattle Sounders FC 2
The Switchbacks left it late to claim their third consecutive victory, but a club-record crowd of 4,308 could be looking forward to even more action this season in the playoffs with Colorado Springs now in pole position for first place in the Western Conference. Orange County, needing a win to have a shot at the playoffs, will provide a good test in the final game of the season, but that will probably be appreciated by Coach Steve Trittschuh as his side looks to the challenge of the postseason.

4. Sacramento Republic FC (Previous: 3)
Last Week: D 1-1 at LA Galaxy II
A second consecutive draw with the Galaxy II, after going behind for a second consecutive occasion, dropped Republic FC out of first place, and now looking to Orange County for help to reclaim the No. 1 seed in the Western Conference playoffs. Sacramento gets Tulsa to close the season, which on paper should provide a victory, but the right focus will be needed as the Roughnecks look to close out a disappointing season with a bang.

5. Rio Grande Valley FC (Previous: 5)
Last Week: L 1-0 at LA Galaxy II; W 1-0 at Orange County Blues FC
The Toros dropped a second consecutive contest before a big bounce-back win against Orange County on Saturday, but now need help if they are to claim top spot in the conference. Hosting San Antonio for its regular-season finale, RGVFC will be hoping to get its attack back on track after only one goal in the past three games ahead of the playoffs.

6. FC Cincinnati (Previous: 7)
Last Week: D 0-0 at Pittsburgh Riverhounds; W 1-0 vs. Orlando City B
Cincinnati locked itself into the No. 3 seed in the Eastern Conference, but was made to labor in both of its games over the past week against sides that have struggled most of the year. With one more visit to Pittsburgh to go, Coach John Harkes will be looking for a sharper performance than its last to Highmark Stadium, and the side could be working to try and earn Sean Okoli the USL Golden Boot.

7. Rochester Rhinos (Previous: 9)
Last Week: W 1-0 at Charlotte Independence
The Rhinos got just the result they – and the Charleston Battery – needed to remain in contention for a home playoff game, and now close the season with Toronto FC II at home, which could prove to be three points for the taking. Rochester’s road performance consistently frustrated the Independence, and could make the side a tough out when it comes to the postseason, whether at home or away.

8. Portland Timbers 2 (Previous: NR)
Last Week: W 2-1 at Arizona United SC; W 2-0 at Vancouver Whitecaps FC 2
Portland has gone from a playoff afterthought to the brink of the top eight, with back-to-back wins over the past week taking their streak to four overall. T2 returns home to face Arizona this Saturday, and could know whether a playoff place is within reach with eighth-place San Antonio kicking off 90 minutes earlier in South Texas.

9. Swope Park Rangers (Previous: NR)
Last Week: W 3-0 at OKC Energy FC
Two consecutive 3-0 victories booked the Rangers a place in the playoffs, and potentially even a home game in the playoffs with two games remaining, as they dismantled a good OKC defense in the first half of Sunday’s victory at Taft Stadium. Swope Park is getting hot at just the right moment, and could be the dark horse the playoffs often seems to provide.

10. Charleston Battery (Previous: NR)
Last Week: W 2-1 at Richmond Kickers
The Battery’s comeback victory not only gave them the season series against their biggest rival, but also slid the side back into contention for a home playoff game if it can overcome the regular-season champion Red Bulls II on home turf this Saturday. Should the Independence slip up in Louisville, fourth place is there for the taking, with the Battery holding the tiebreaker over Rochester in the standings.