The Red Bulls II claim their prize, but the battle for position continues below 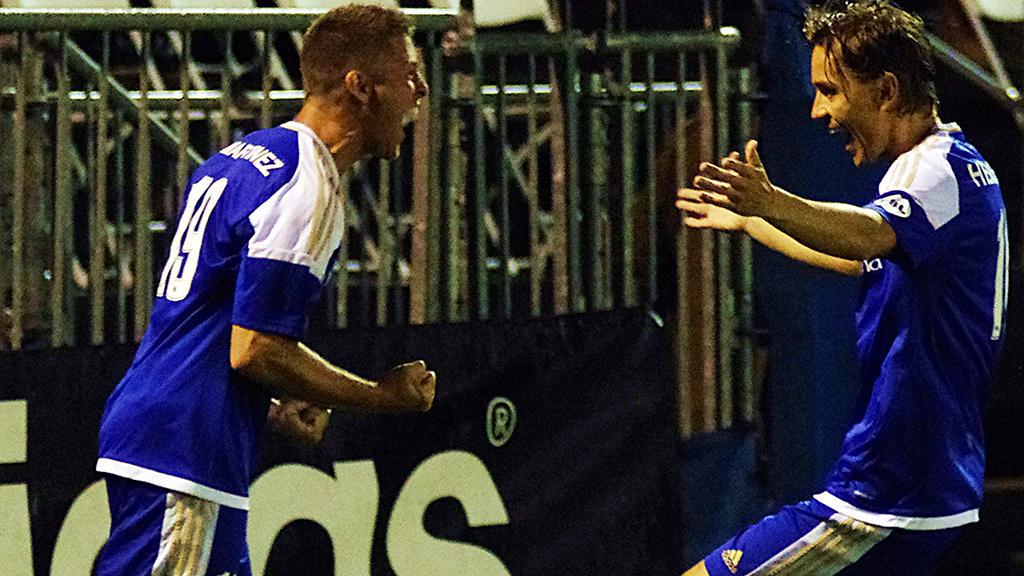 Two weekends to go, and the standings in both conferences have shaken out to provide a clear hierarchy as the postseason approaches. The separation among the teams that should start making plans to host a postseason contest, led by already confirmed hosts the New York Red Bulls II and Louisville City FC, and those who’ll be hitting the road in pursuit of a championship has been marked.

One of the teams that appears in line to host, the Charlotte Independence, made another small shift up the Power Rankings this week, now sitting at No. 6 after its impressive 4-0 win against the Pittsburgh Riverhounds on Saturday night. The Independence have found their shooting boots in the past five games, scoring 16 goals in that span. They’ve also taken some impressive results, such as their 3-2 win against FC Cincinnati two weeks ago, which has helped them to a 7-1-2 record in the last 10 games.

As comfortable as things seem, though, change could come quickly. The Independence visit the Richmond Kickers on Wednesday night in one of the biggest games of the penultimate week of the season. Continue to surge, and someone will almost certainly be paying a visit to Ramblewood Stadium for the conference quarterfinals. Falter against a Kickers side that only just saw a 10-game winning streak end, and that hasn’t lost at home since May, and the pressure will be back on.

There are 35 games remaining in the USL regular season. #RICvCLT figures to be among the best of them.

1. New York Red Bulls II (Previous: 1)
Last Week: W 4-1 at Harrisburg City Islanders; D 1-1 at Rochester Rhinos
The Red Bulls II locked up the first silverware in the club’s history with its victory on the road against Harrisburg, and then showed resilience on the road to earn a late draw with Rochester thanks to Vincent Bezecourt’s dramatic finish. The Red Bulls II have two games to go, and can now recalibrate as they look to become the third team in USL history to claim both the regular season and league championship in the same season.

2. Louisville City FC (Previous: 4)
Last Week: W 2-0 vs. Richmond Kickers
We wrote last week that a victory in what could be a playoff preview would cement City as the class of the Eastern field behind New York. Well, guess what? City was excellent against the Kickers in both phases of the game, and a worthy winner. A win against Saint Louis on Saturday night would now not only claim the King’s Cup for a second consecutive season, but also see the side clinch the No. 2 seed in the Eastern Conference.

3. Sacramento Republic FC (Previous: 3)
Last Week: D 1-1 at LA Galaxy II
A solid point on the road against its Southern California rival was a good enough return for Republic FC with Rio Grande Valley FC’s winless streak being snapped. Now nine games undefeated itself, Sacramento showed strong adjustments to come back from a halftime deficit against Los Dos, and will likely take those lessons into the rematch between the teams this Saturday night at Bonney Field.

4. Colorado Springs Switchbacks FC (Previous: 6)
Last Week: W 2-0 at Vancouver Whitecaps FC 2
The Switchbacks continued to see things fall their way, while also taking care of their own business on the road in Vancouver to open up a clear path to at least a top-four finish. Luke Vercollone’s two goals highlighted a performance that was admirable in its patience after going up a man less than 20 minutes in, and if the captain can continue his recent run of form into the postseason, Colorado Springs will be a serious threat to most.

5. Rio Grande Valley FC (Previous: 2)
Last Week: L 1-0 vs. Portland Timbers 2
The Toros’ undefeated streak was going to come to an end at some point, and did so at the hands of a Timbers 2 side that has notched some impressive victories over the past few weeks. Rio Grande Valley still managed to double the number of total shots and shots on target its visitors faced on home turf, but will now turn to a very interesting midweek clash against the LA Galaxy II that would see the side grab first place with a victory.

6. Charlotte Independence (Previous: 7)
Last Week: W 4-0 vs. Pittsburgh Riverhounds
The Independence made it three wins on the spin against the Riverhounds, and are now in strong position to claim a top-four berth at the end of the season. Wednesday night could see the side take a big step toward that goal with a visit to face the Richmond Kickers that is one of the marquee games of the penultimate week of the season.

7. FC Cincinnati (Previous: 9)
Last Week: W 2-1 vs. Saint Louis; W 2-0 at Wilmington Hammerheads FC
After back-to-back defeats for the first time this season, back-to-back victories pushed Cincinnati back into third place in the Eastern Conference, and Sean Okoli back into the race for the USL Golden Boot. Cincinnati has two winnable games up next that could see it clinch a home playoff game as it first visits Pittsburgh and then hosts Orlando.

8. Richmond Kickers (Last Week: 4)
Last Week: L 2-0 at Louisville City FC
The Kickers’ 10-game undefeated streak ended in slightly disappointing fashion on the road in Louisville, not in the fact that the side lost, but that it never seemed to find a solution to the questions the hosts were asking of it. Richmond has a chance to bounce back quickly on Wednesday night, however, with a victory against Charlotte almost mandatory for the side to have a chance at a home playoff game.

9. Rochester Rhinos (Last Week: 8)
Last Week: D 1-1 vs. New York Red Bulls II
The Rhinos would probably have taken a draw against the Red Bulls II going in, but will definitely feel as though they left points on the table after the visitors’ late equalizer at Rhinos Stadium. With two games to go, the defending USL champions are probably going to have to hit the road to defend their title, but remain difficult to beat with only five losses in 28 games.

10. Seattle Sounders FC 2 (Previous: 10)
Last Week: D 2-2 at Vancouver Whitecaps FC 2; D 2-2 at OKC Energy FC
S2 followed up its back-to-back wins with back-to-back draws on the road against Vancouver and OKC, which puts even more pressure on the side to win out over its last two games to earn a playoff berth. Saint Louis’ victory against San Antonio on Saturday was a big plus for S2, but it will now be rooting for a draw when SAFC visits Real Monarchs SLC for the USL Game of the Week on ESPN3 on Wednesday night.