Louisville ‘Best We’ve Been in Weeks’ in Victory

Crowd of 7,362 saw side down Richmond, clinch home playoff contest for conference quarterfinals 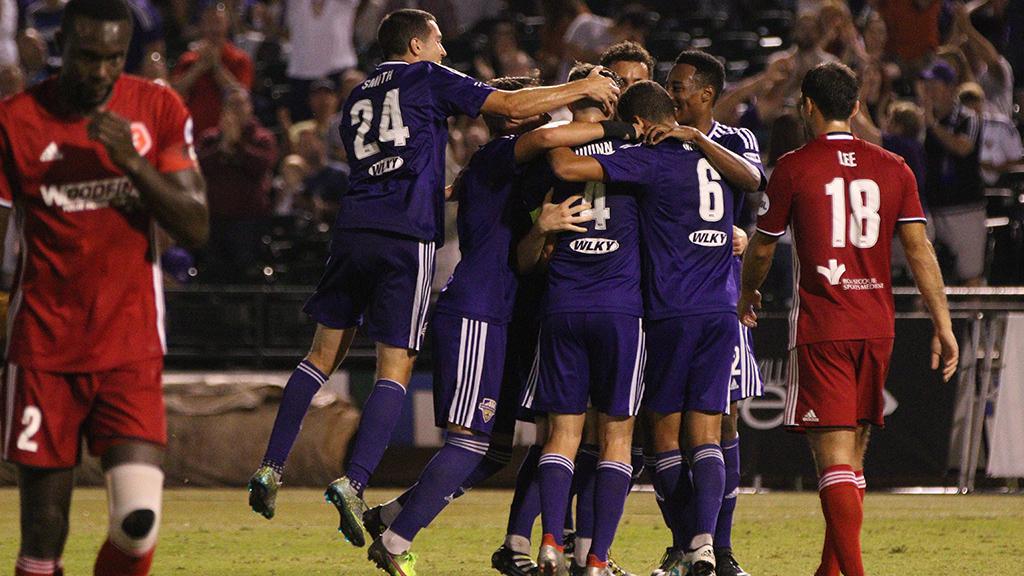 LOUISVILLE, Ky. – Back-to-back 1-0 victories against Bethlehem Steel FC and FC Montreal were important for Louisville City FC to get things back on track, but in Saturday night’s 2-0 win against fellow playoff contender the Richmond Kickers, the hosts put on an impressive show for the crowd of 7,362 fans at Slugger Field.

“I thought that was the best we’ve been in weeks, and I thought defensively that we gave a really strong performance” said Louisville Coach James O’Connor following the game. “Equally, I thought our movement and our possession tonight was good. And it was a very strong performance, especially against a team that had been doing so well. Leigh is probably one of the better coaches – well not probably. He is definitely one of the better coaches in the league, and I have a lot of respect for [him] so, to play like that, we were really pleased.”

Coming in on a 10-game undefeated streak that saw the Kickers hold top-four aspirations of their own, Richmond was stymied for most of the night as Louisville controlled much of the game’s tempo, and seemed sharper getting to loose balls in midfield. The opening goal came from the penalty spot after Kadeem Dacres was brought down, beating a Richmond defender to the ball after an initial shot had been blocked. Cameron Lancaster put penalty kick away clinically to set City on its way.

Louisville got a second from Magnus Rasmussen 10 minutes into the second half. As he and Aodhan Quinn exchanged passes approaching goal, the Kickers’ defense backed away slightly, allowing Rasmussen to launch a strong left-footed shot into the left side of the net. The goal was Rasmussen’s first in a season that has been hit by injury, after notching eight tallies and four assists in 2015.

“I hit it pretty good,” Rasmussen said. “It's obviously a big moment for me to get a goal and feel like I'm making a difference on the team again. It's hard to go through a surgery. When I started, it was my first start in 10 months. Now that I've got a few starts, I feel like my game is improving every game. It feels great to be back.”

“I thought he broke well, and good quick pass and then it came into him and he’s hit it really, really well,” added O’Connor. “You know, all credit to him. He’s worked really, really hard. Magnus, you know, for him it’s probably been a frustrating year for him, so I’m really pleased for him to get a goal, and certainly a goal like that tonight.”

From there, Louisville’s defense did the rest. With goalkeeper Greg Ranjitsingh back between the sticks after international duty with Trinidad & Tobago over the past week, the back four was excellent in front of him. Center backs Sean Reynolds and Paco Craig snuffed out a number of opportunities, while Tarek Morad performed well at left back in lieu of Ben Newnam.

“For us, when you’ve got such a good squad, I think it’s making sure that you get people that are on their toes and that are doing the right things and that was the case for us tonight,” said O’Connor, who also started Lancaster over leading scorer Chandler Hoffman. “I thought that was something that would cause them problems, and it did. But, you know, Chandler, Ben, everyone, it’s always a group for us. It's never just one individual, and I think that is something that I’ve preached all season.”

The victory ensured Louisville will host its second playoff game in club history between September 30 and October 2 in the Eastern Conference Quarterfinals of the 2016 USL Playoffs. It also moved the side that much closer to clinching the No. 2 seed in the conference behind the New York Red Bulls II. A win against Saint Louis FC next Saturday would accomplish that, although results elsewhere for FC Cincinnati and the Charlotte Independence could see the side clinch the position by the end of Wednesday night.

With the playoffs in sight, however, O’Connor and his side are remaining focused on finishing the regular season strongly to carry momentum into their second postseason.

“It’s a testament to the guys and to the group. I think sometimes people can take things for granted, and I think it speaks volumes about the group that we have here,” said O’Connor. “People need to understand you don’t go and get home games in the playoffs without being a good team, and without having great team spirit, and we are really pleased with the group tonight. I think we gave a really strong performance.”