Top two in East meet with chance to clinch playoff berth, race heats up out West 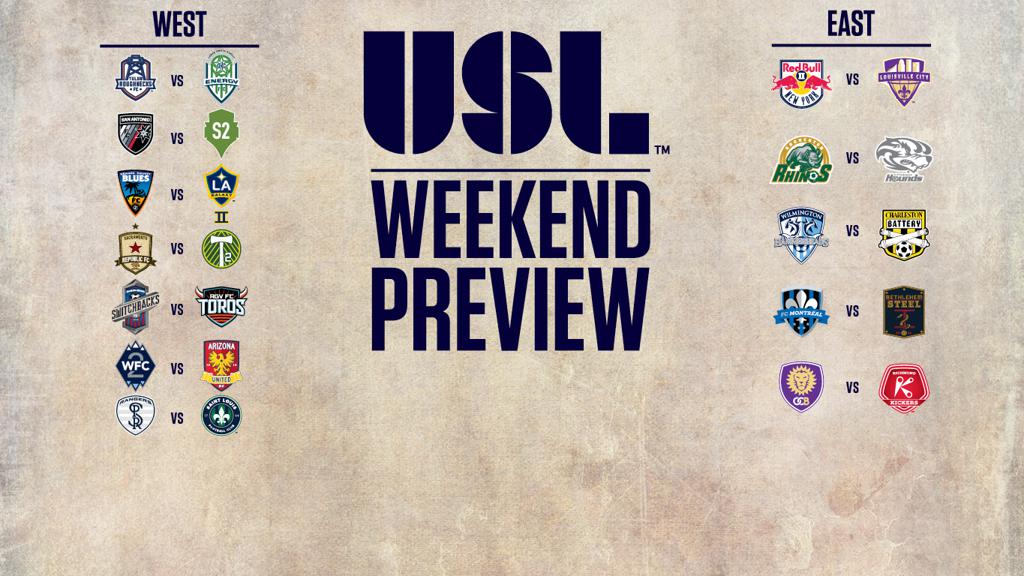 TAMPA, Fla. – The top two teams in the Eastern Conference square off with the chance for either to clinch a place in the 2016 USL Playoffs, while six of the eight teams in the Western Conference playoff positions meet over the course of a 12-game slate of action this weekend to conclude Week 22 in the USL regular season. The New York Red Bulls II and Louisville City FC kick off Friday night in the marquee game of the weekend, and the second that will feature the Video Assistant Referee system in use.

GAMES TO WATCH
Friday, August 19
New York Red Bulls II vs. Louisville City FC
7 p.m. ET, Red Bull Arena
The New York Red Bulls II host Louisville City FC on Friday night as the top two teams in the USL Eastern Conference meet with a chance to become the first team to seal a place in this season’s postseason, with the winner also getting a step up in the battle for the USL regular season championship.

The Red Bulls II (14-3-5, 47pts) are coming off back-to-back big victories that have seen the side notch five goals in each contest. Last Friday night the Red Bulls II claimed a 5-1 victory against Orlando City B as four different players found the back of the net, including USL Team of the Week selection and USL 20 Under 20 player Junior Flemmings.

Louisville (13-3-8, 47pts) enters off back-to-back draws that have allowed the Red Bulls II overtake it at the top of the conference standings. Last Saturday night a late goal by Paco Craig – his first as a professional – gave City a 1-1 draw with the Rochester Rhinos at Slugger Field, but with the Red Bulls II holding two games in hand, a win is likely essential to Louisville’s pursuit of the regular season crown.

San Antonio (7-8-7, 28pts) took a 3-2 victory against Arizona United SC on Wednesday night in the USL Game of the Week on ESPN3 at Toyota Field as Cesar Elizondo had a goal and assist. Franck Tayou and Carlos Alvarez also had a goal apiece in the victory as SAFC moved within two points of eighth place with eight games to go in its regular season.

Seattle (7-10-6, 27pts) remains in the hunt despite seeing its six-game undefeated streak come to a crushing end last Saturday night in South Texas, when Rio Grande Valley FC took a 6-0 win at Toro Park. S2 will need to bounce back strongly as it makes its second trip to the Lone Star State in two weeks, with a victory vital to its playoff hopes.

Orange County Blues FC vs. LA Galaxy II
10 p.m. ET, Anteater Stadium
The final edition of the I-405 Derby this regular season arrives on Saturday night at Anteater Stadium as both the Blues and Galaxy II look to boost their position in the top eight of the Western Conference standings.

The Blues (9-11-4, 31pts) moved into seventh place in the Western Conference standings last week as they took a 1-0 victory against Vancouver Whitecaps FC 2, but the side was unable to build on that last Sunday as it fell 2-1 to the Portland Timbers 2. After taking a 2-0 win against Los Dos in their first meeting at Anteater Stadium this season, a repeat performance would be very welcome to Orange County’s playoff hopes.

The Galaxy II (9-4-9, 36pts) played to a 0-0 draw last Saturday night on the road against OKC Energy FC as goalkeeper Clement Diop earned USL Team of the Week honors for a stellar performance. Now winless in their past three outings, Los Dos have missed out on chances to return to the top of the Western Conference standings of late, but a win against their regional rival would help get things back on course in the pursuit of a top-four finish.

The Switchbacks (10-6-7, 37pts) sit on top of the Western Conference entering this weekend’s action on goal differential from Sacramento and Vancouver, but could see themselves drop out of the top four should they fall against the Toros as tight as the race for first place is currently. Coming off a 1-0 win against Tulsa Roughnecks FC last Thursday, the Switchbacks will be hoping their strong home form is enough to hold onto top spot.

The Toros (9-5-9, 36pts) moved a point back of the trio tied on 37 points on Thursday night when they ran away with a 5-0 victory against the Roughnecks at ONEOK Field. Forward Emilio Garcia – the reigning USL Player of the Week – scored his third goal in two games to open the scoring in Tulsa, as the Toros’ defense recorded its seventh consecutive shutout, the longest such streak in the USL this season.

NUMBER CRUNCHING
596 – The New York Red Bulls II and Louisville City FC have combined to take 596 shots so far this season – both in the top four in the USL – ahead of Friday night’s game at Red Bull Arena.

56 – Rio Grande Valley FC hasn’t conceded a goal since a stoppage-time penalty kick by Orange County Blues FC’s Didier Crettenand on June 26, a streak that will reach 56 days on Sunday when the Toros face Colorado Springs.

44 – USL leading scorers the New York Red Bulls II have scored 44 goals this season, two short of their total in 2015 with eight games remaining in the regular season.

3 – First place and sixth place in the USL Western Conference are separated by just three points going into this weekend’s action, with all six teams set for action on Saturday or Sunday.

OTHER NEWS AND NOTES
- Saint Louis FC became the second team to make a coaching change this season when it parted ways with Dale Schilly on Monday. Tim Leonard, an assistant coach with the club, was appointed interim coach for the remainder of the season. Saint Louis is currently in 11th place in the Western Conference, two points back of eighth.

- Sacramento Republic FC signed Christian Chaney, who was named the No. 1 prospect in the PDL and an All-League selection this summer with the Fresno Fuego. Chaney had 13 regular-season goals for Fresno and will look to continue his success at the next level.

- Wilmington Hammerheads FC (6-10-6, 24pts) plays host to the Charleston Battery (10-5-7, 37pts) on Saturday night at Legion Stadium (7 p.m. ET | Match Center) with the Battery looking to boost their chances of a top-four finish in the East with a win against their Southern Derby rival. Wilmington has been in a tailspin of late, taking just a point from its past six games, and desperately needs a win to keep its playoff hopes afloat.

- The Black Gold Derby resumes on Saturday night as Tulsa Roughnecks FC (5-15-3, 18pts) plays host to OKC Energy FC (8-3-10, 34pts) at ONEOK Field (8:30 p.m. ET | Match Center). Energy FC has been in a scoring drought of late, going scoreless in its past four outings, but has scored five goals in the two previous meetings with the Roughnecks this season, which could give the club’s attack a chance to come to life.

- Vancouver Whitecaps FC 2 (10-6-7, 37pts) will look to get back on a winning track on Sunday afternoon when it hosts Arizona United SC (8-9-6, 30pts) at Thunderbird Stadium (6 p.m. ET | Match Center). WFC2 is winless in its past four games to slide to third in the conference standings, while eighth-place Arizona saw its three-game winning streak end on Wednesday night in a 3-2 loss in San Antonio.

- The Swope Park Rangers (8-9-5, 29pts) and Saint Louis FC (7-9-7, 28pts) will both be fighting for their playoff lives when they meet on Sunday evening at Children’s Mercy Victory Field (7 p.m. ET | Match Center). Both teams currently sit outside the top eight in the West, and a defeat would be another big blow to either as they look to reach the postseason.

- The Richmond Kickers (11-6-6, 39pts) will look to continue their seven-game undefeated streak when they visit Orlando City B (8-8-7, 31pts) on Sunday night at the Titan Soccer Complex (7:30 p.m. ET | Match Center). After the Kickers’ midweek clash with the Charleston Battery was postponed due to serious storms at City Stadium, Richmond will be looking for another win as it visits an OCB side that has conceded nine goals in two defeats in its past two outings.