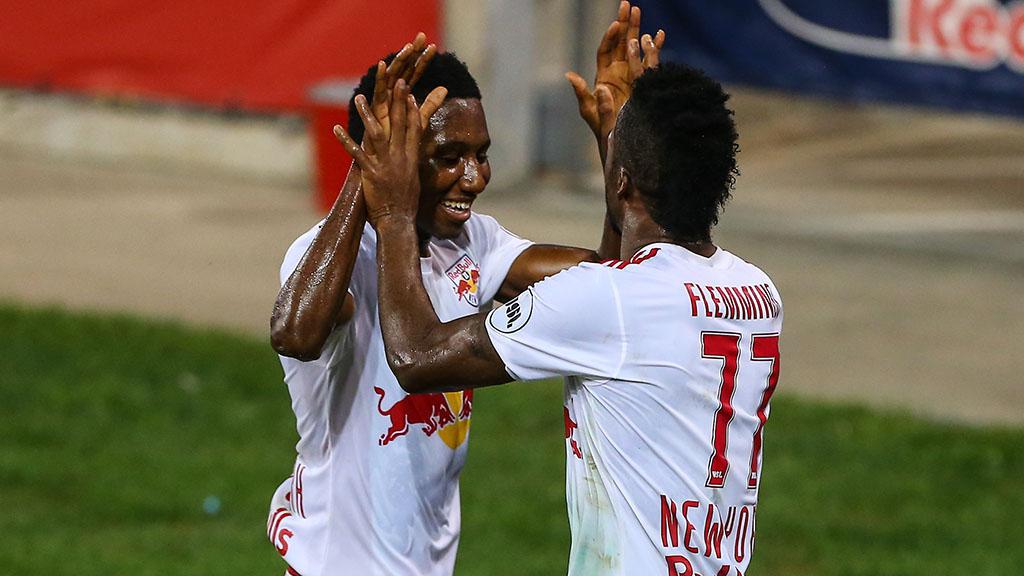 For a moment there, it looked like the New York Red Bulls II might have hit a wall. After back-to-back defeats, including a deflating stoppage-time loss to the Richmond Kickers two weeks ago, it wasn’t that unreasonable to wonder how quickly the side would be able to find a turnaround.

Well, scratch those thoughts. Back-to-back victories that saw the side rack up five goals in each, and the Red Bulls II now hold a potentially decisive edge in the race for the USL regular season championship. Now back atop the USL Eastern Conference with two games in hand on Louisville City FC ahead of their showdown on Friday night at Red Bull Arena, Coach John Wolyniec’s side looks as confident as it ever has this season.

That confidence was exemplified on Friday night by Jamaican standout Junior Flemmings. No. 6 on the recent USL 20 Under 20 countdown, Flemmings was dynamic throughout the night, while Speedy Williams scored an outstanding goal that caught the eye of some of the Red Bulls’ MLS squad.

Leading the USL in goals scored, tied for second in goals conceded, and holding the biggest goal differential, New York is looking like the side that lost just once in its opening 18 games this season.

1. New York Red Bulls II (Previous: 6)
Last Week: W 5-1 vs. Orlando City B
New York looked all the way back to the side that began the season with only one defeat in its first 18 games against an Orlando side that entered on a nine-game undefeated streak. The Red Bulls II appear to have the wind in their sails again with Louisville coming to visit this Friday night in the marquee game of Week 22.

2. Richmond Kickers (Previous: 1)
Last Week: D 1-1 vs. FC Cincinnati
The Kickers were disappointed to have let a potential seventh consecutive victory slip away against FC Cincinnati, but the side should still take a lot away from a strong overall performance that keeps it in contention for a top-four place at the end of the season. A busy week is up next, with a visit from Charleston on Wednesday night and a trip to Orlando on Sunday.

3. FC Cincinnati (Previous: 3)
Last Week: D 1-1 at Richmond Kickers
Cincinnati had Andrew Wiedeman to thank for earning it a point on the road against Richmond and preserving sole possession of third place in the East on Saturday night, and a late winner almost materialized as the finish seemed to spark the side to life in the closing stages. Cincinnati gets the week off now ahead of a big pair of games in Week 23 that sees it host Rochester and then pay a visit to the Red Bulls II.

4. Sacramento Republic FC (Previous: 5)
Last Week: W 4-3 at Saint Louis FC
Republic FC got off to a flying start against Saint Louis FC on Saturday night, and needed all of it to take a second win in the past three games as the hosts rallied back late at World Wide Technology Soccer Park. With Vancouver and the LA Galaxy II continuing to falter, Sacramento is now in prime position to claim top spot in the Western Conference at the end of the season, although it might need to be wary of a Portland side that’s coming off back-to-back victories when it visits Bonney Field on Saturday.

5. Rio Grande Valley FC (Previous: 10)
Last Week: W 6-0 vs. Seattle Sounders FC 2
The attacking explosion the Toros had been waiting for finally arrived on Saturday night as they handed a thumping to a Seattle Sounders FC 2 side that entered on a six-game undefeated streak. Add in the six-game shutout streak the Toros currently hold, and there’s a chance they could be right among the contenders by this time next week with a two-game trip to Tulsa (Thursday) and Colorado Springs (Sunday) up next.

6. Louisville City FC (Previous: 7)
Last Week: D 1-1 vs. Harrisburg City Islanders; D 1-1 vs. Rochester Rhinos
Louisville needed to come from behind to take a point from each of its games in the past week, and as a result ceded top spot in the Eastern Conference to the New York Red Bulls II, and opened the door for FC Cincinnati should it be able to take advantage of its games in hand. After being outstanding in possession for most of the season, things now need to be tightened up ahead of a game against a Red Bulls II side that will punish poor giveaways.

7. Arizona United SC (Previous: NR)
Last Week: W 1-0 vs. San Antonio FC
Three wins on the spin have sent Arizona into the playoff positions for the first time in a long time as Tyler Blackwood’s goal proved the difference against San Antonio FC on Saturday night. For a while, the bounces didn’t appear to be going United’s way, but now things seem to be falling right for Coach Frank Yallop’s side as the TLC front line of Blackwood, Long Tan and Chris Cortez appears to be in perfect harmony.

8. Colorado Springs Switchbacks FC (Previous: NR)
Last Week: W 1-0 vs. Tulsa Roughnecks FC
The Switchbacks return to the rankings after their victory against the Roughnecks on Thursday night, which was comprehensive enough as they broke out of a five-game winless streak. Now on top of the Western Conference on goal differential, it would appear the Switchbacks will need to string more victories together to hold onto the top spot, and Sunday’s game with Rio Grande Valley FC should be a fascinating one.

9. Charlotte Independence (Previous: NR)
Last Week: W 1-0 vs. Wilmington Hammerheads FC
The Independence continued to solidify their position in the Eastern Conference playoff positions with their victory against the Hammerheads and are now undefeated in their past five games. Wednesday night’s game against an Orlando side that will be looking for a big bounce-back performance could be challenging, but with eight games remaining the Independence could be flying under the radar for an even higher position than the sixth spot they currently hold.

10. Portland Timbers 2 (Previous: NR)
Last Week: W 2-1 vs. Orange County Blues FC
After last week’s heroic comeback against the Galaxy II, Portland turned the trick against their Southern California rivals from the front on Sunday as two goals in three minutes sank an Orange County Blues FC side that had taken a victory against Vancouver in midweek. T2 will need more results like those suffered by Saint Louis, Swope Park and Seattle, but they’re now only five points out of eighth with eight games to go.