Second-half rally comes up short in front of sellout crowd of 5,453 fans 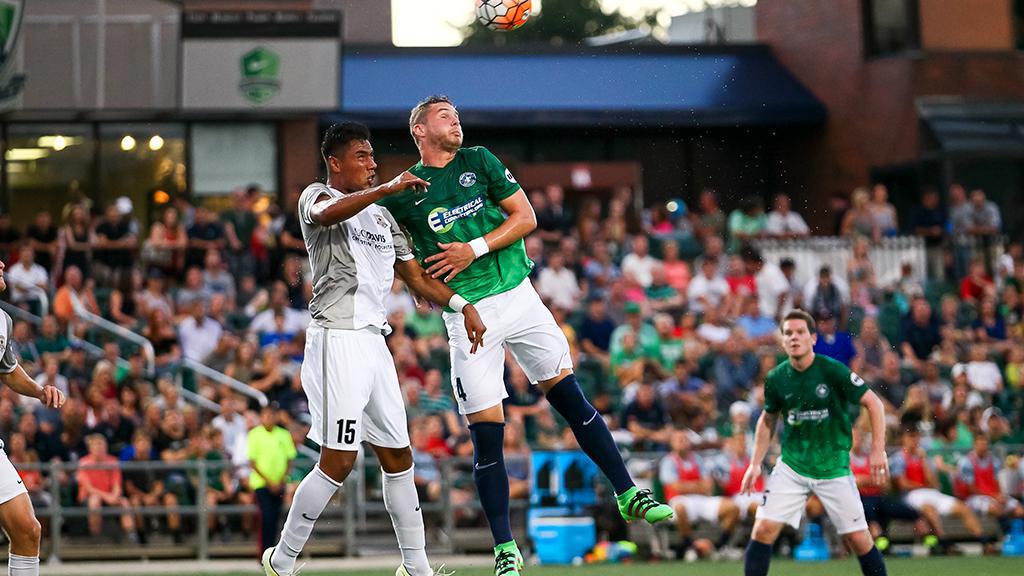 FENTON, Mo. – Handed the chance to make a case for a place in the Western Conference Playoffs on Saturday night, Saint Louis FC knew the stakes going in against 2014 champion Sacramento Republic FC.

While the hosts certainly looked the part of a team that could be part of the postseason as it stormed back in the second half on Saturday night, a disastrous opening 20 minutes that saw the visitors score three times left Saint Louis' players looking back with regret at a 4-3 defeat in front of a sellout crowd of 5,453 fans at World Wide Technology Soccer Park.

“You can’t start a game that way, simple as that,” said Saint Louis midfielder Chad Bond. “Giving up three goals in the first 15 minutes is suicide. As well as we played in the second half, we killed ourselves in the first half.”

Without Head Coach Paul Buckle, who had returned to England to be with his father, Sacramento stormed out of the gates to take a firm grip on the game. Five minutes in Tommy Thompson created space on the right side and floated a teasing cross that was met by a late-arriving J.J. Koval for the opening goal.

Six minutes later Cameron Iwasa notched the first of his two goals on the night as he redirected a cross from the left by Matt LaGrassa. Making his first start for the side, LaGrassa added a second assist in the 17th minute when his cross from the left side picked out Octavio Guzman’s run to the back post for a third.

As would be expected, Saint Louis fought back, and made it a two-goal game midway through the first half when Mike Ambersley sent home a low shot from the edge of the penalty area. Sacramento continued to press forward, though, and it took two good saves from Ryan Thompson late in the half to keep the score 3-1 at the break.

Just before the hour-mark, however, there was little the Jamaican goalkeeper could do as Thompson’s cross found Iwasa for his second of the night to make it 4-1, apparently securing all three points.

But then things started shifting in Saint Louis’ direction. Second-half substitute Alex Morrell – making his debut on loan from the Chicago Fire – fired a shot just wide of the post with 20 minutes to go.  Then Roberts, who had come on for an injured Schillo Tschuma late in the first half, fizzed a shot that Sacramento goalkeeper Evan Newton wasn’t able to control that found the right corner of the net.

“I feel really confident that I can come in the game and create chances and get past defenders,” said Roberts. “Our second half was good, but we can’t win games playing the way we did in the first half.”

Alongside Morrell, fellow Fire loanee Collin Fernandez also made an impact as his free kick with five minutes to go found the head of defender A.J. Cochran, only for the chance to go high of the crossbar.

“It was an intense game to come into,” said Morrell “I just want to come in and give my all, and the guys were pushing me and cheering me on as soon as I got on the field, and the fans were great also.”

As much as Saint Louis pushed, though, its third goal didn’t arrive until the final minute after Irvin Herrera was brought down 20 yards from goal just left of center. Bond stepped up and scored an outstanding free kick into the top-left corner of the net, but that was as close as the hosts would come as Republic FC held on in stoppage time, leaving the hosts to look back disappointedly at their start to the game.

“When you play a good team like Sacramento, and guys aren’t prepared to do their role, things break down,” said Saint Louis Coach Dale Schilly. “That’s what happened tonight.”

Two points back of Arizona and the eighth and final playoff position after Saturday night’s results, there remains time for Saint Louis to find the right run of form to get into the top eight. With only seven games left to go, however, next Sunday night’s game against Swope Park Rangers now looms even larger.