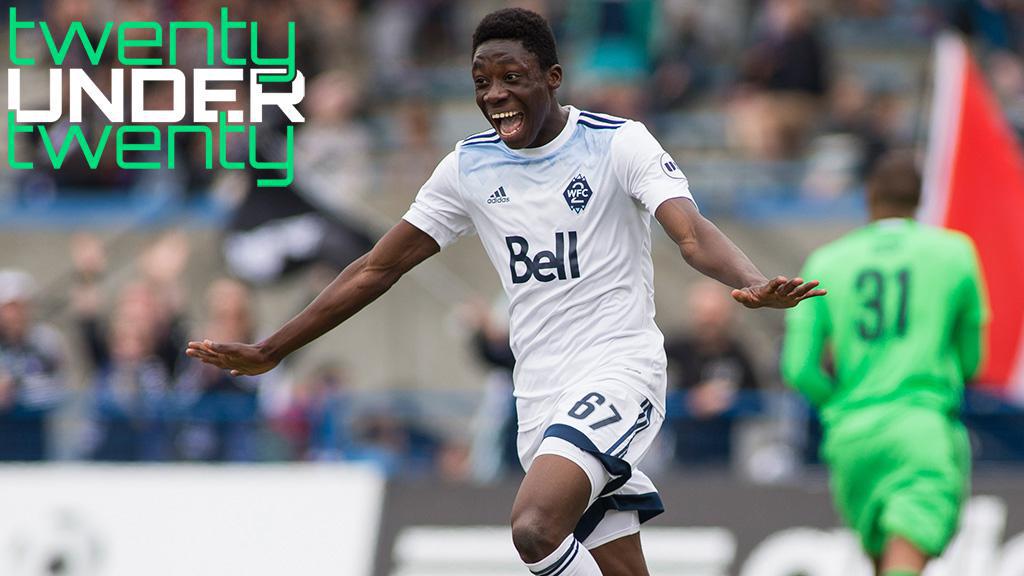 VANCOUVER, B.C. – One year ago, Alphonso Davies was heading west to Vancouver from Edmonton to try to earn a spot in the Whitecaps Residency program. He impressed, and quickly earned a place in the ‘Caps U16 side.

Fast forward 12 months and it’s been a whirlwind year for the 15-year-old.

Davies quickly impressed with Vancouver’s U16s and was soon moved up to the more testing environment of the U18 team. He continued to excel and caught the eye of Whitecaps MLS coach Carl Robinson, who invited him to join the ‘Caps first team squad for preseason.

After playing in a couple of friendlies against other MLS sides, Davies inked his first professional contract at the end of February, a USL deal with WFC2. He’s continued to shine in the USL environment and this month he signed a homegrown contract with the MLS team, making his debut the following day.

It’s all happened so fast, and even the young forward readily admits that when he first headed to Vancouver he “didn’t think things would go so quickly”. As quick as it may seem, Robinson just sees it as the natural progression.

"The boy deserves the next transition," Robinson told reporters after it was announced that Davies had signed a MLS deal. "He’s still got a lot of work ahead of him, but he’s got great potential. It shows that if we feel it’s right, then we’ll make the move. Hopefully he’s the first of many of the USL players that transitions up."

The road ahead is not going to be all plain sailing for Davies. There will undoubtedly be many more ups and downs along the way before he even gets out of his teenage years, but the abundant talent and potential he possesses is plain to see.

For now, Davies will be honing his skills with both the Whitecaps’ MLS and USL teams. Vancouver are keen not to rush him and have him burn out, but they also want to test him in a variety of tough environments, levels and situations.

Both leagues will provide that, and although the transition to the pro game from youth soccer has seemed smooth, the gulf in quality has certainly been noted by Davies.

"It was a big jump," Davies told USLsoccer.com. "And coming from the USL into the first team has been a really big jump because MLS players they're bigger, stronger, they're smarter.

"I think the biggest difference is definitely physicality, but also speed of play. They move the ball really quick. They don't stop running and you have to be fit enough to play against them."

Davies made his ninth USL appearance of the season on Sunday, putting in an, at times, electrifying first half performance in WFC2's 2-1 win against Sacramento that kept the side on top of the Western Conference. Anyone watching some of his runs and turns at the weekend would see why so many are excited about what lies in store for the player if he continues his development apace.

He has now racked up 544 minutes in his rookie season in the league, grabbing two goals, and he certainly hasn’t looked out of place amongst older, more physically developed players.

What’s helped with the transition is being part of a very young WFC2 squad. Davies is one of five teenagers on the Whitecaps roster, with many more just a year or two older, although ultimately, the forward doesn’t see age as anything more than a number and certainly not a hindrance to his career right now.

"When you step on the pitch, everyone's equal. In my opinion, no-one's older, no-one's younger, everybody's the same. Just like your intelligence on the field can make the difference."

It’s an environment that has helped him fit in quickly and he feels he’s learned much in his first few months playing in the USL to prepare him for hopefully a long future in the game.

"USL has really taught me a lot,” Davies said. “It all balances out. If I want to do stuff here that I can't do up there, I can try to perfect it here and then probably go and try it in MLS."

The man overseeing the current stage of Davies’ development is WFC2 head coach Alan Koch. The South African has liked what he’s seen from Davies so far, both in terms of the production value on the pitch and also his attitude and commitment off it.

"He's a young player that's got a lot of confidence and a lot of belief in himself," Koch told USLsoccer.com. "He's one of those guys that whatever environment you put him in, he's going to adjust to it. He came through the 16s, the 18s, then to us very quickly. The games that he's played for us, he adjusted very, very well.

"He's scored a couple of goals at this level already and he's shown that he's a dangerous player. He's a great attacking threat and the more and more he continues to grow from these experiences, the better he's going to get in the long run."

Davies played in all four of Vancouver’s Canadian Championship matches in June, as a USL call-up, turning heads and creating buzz along the way. That would be natural for any club playing a 15-year-old in their first team, but when that player then looks to belong in that adult environment, it’s impossible not to generate a lot of chatter about his future potential.

But with that chatter comes an added pressure, from fans and media alike. An expectation to perform, without taking into account the normal up and down form that you get with every young player. 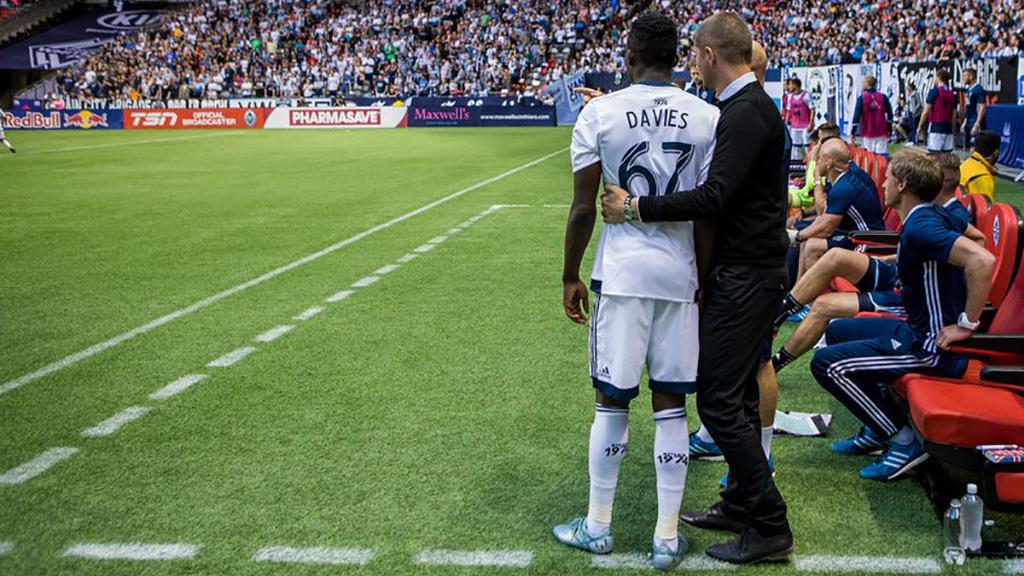 That’s a pressure that Robinson and the Whitecaps are keen to shield Davies from as much as possible. Robinson has been involved in the pro game for more than 20 years and has seen more than his fair share of young talent come through and be built up, only to fail to live up to expectations and fall by the wayside. That's a situation he's wanting to make sure doesn't happen with Davies, who doesn't even turn 16 until November.

"It’s important we protect him," Robinson said firmly. "You’ve got to remember he’s 15 years of age. He’s still at school, so you’ve got to let him be a kid, because he’s a kid.  But he’s got fantastic potential and talent, so it’s important I don’t over coach him, because I want him to play free.

"It’s important [the media] don’t stick a microphone in his face every day. I’ve been in the game a long time and I know with young players what works and what doesn’t work. Previous young players haven’t been dealt with correctly and they’ve wasted their talent. We don’t want that to happen."

For a 15-year-old with the footballing world at his feet, and coming off a year like he’s had, Davies remains very grounded and humble. A lot of that comes from his tough upbringing, with his family forced to flee Liberia for Canada when he was aged four, in the aftermath of two civil wars that brought the country to its knees.

His mother was originally not sure about sending her son hundreds of miles away to Vancouver. Davies admits it was "a tough decision" for her but one which has reaped so many rewards, and he revealed how "proud" his mother is of his success. 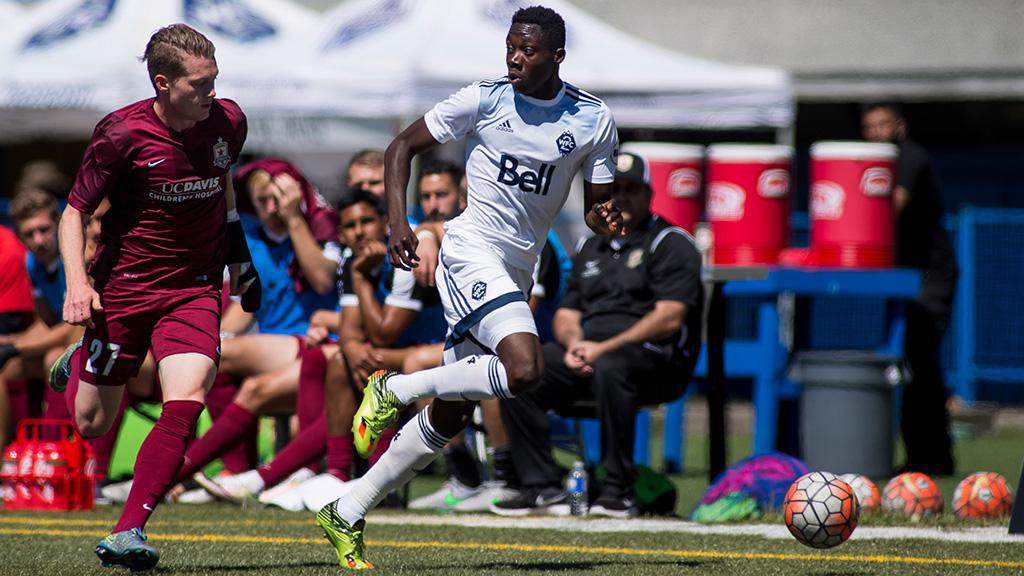 She won’t let him get too big for his boots, but like pretty much everything you talk to Davies about, he’s really unfazed by all the hype and attention anyway.