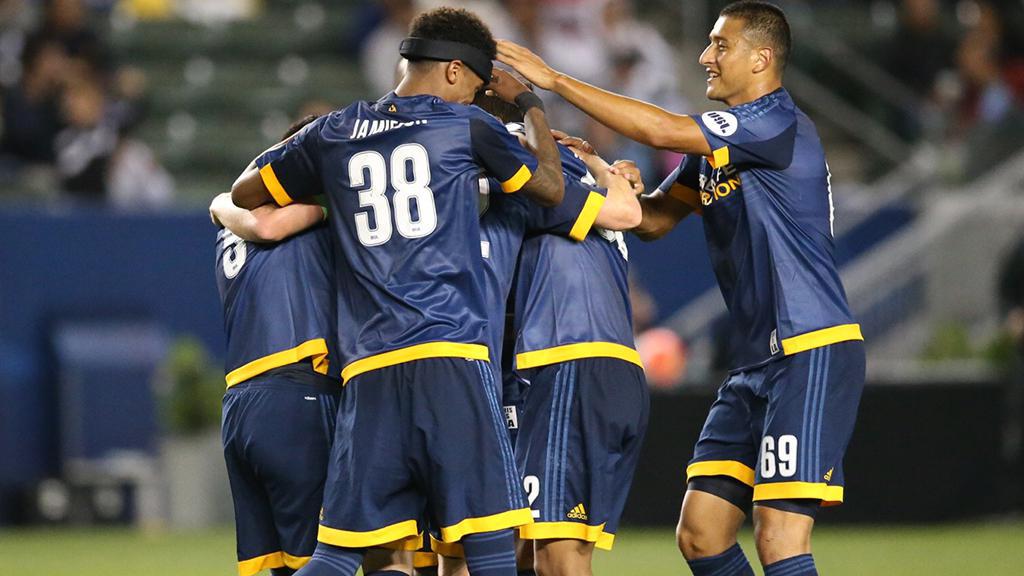 For a while, it looked as though the LA Galaxy II were poised to set a new USL record for draws in a season, with more than half their games ending all square as they reached the halfway point of the season.

Four consecutive victories later, those thoughts have been replaced by the possibility that Los Dos might turn out to be the best, and most exciting, team in the Western Conference for a second consecutive year. Saturday’s 3-2 win against San Antonio was their fourth in a row, and moved the side back to the top of the USL Power Rankings this week.

On the Eastern side of the standings, it’s hard to imagine how things could have ended up more jumbled after this past week of results, as each of the top four took victories against each other in what’s shaping up to be a great race to the finishing line.

Meanwhile, the consistent lack of consistency further down the table has brought a new invitee to the potential playoff party in Seattle Sounders FC 2 and its three consecutive wins. Five points separate seven teams from seventh to 13th now, with plenty of time for anyone to make a move.

1. LA Galaxy II (Previous: 3)
Last Week: W 3-2 at San Antonio FC
The Galaxy II have reeled off four consecutive victories to remain tied on points with Vancouver at the top of the Western Conference, and have regained their feel for picking up wins on the road with back-to-back victories away from StubHub Center after Saturday’s win at San Antonio FC. Los Dos’ attack now leads the USL with 40 goals, and the incisiveness it continued to show at Toyota Field should have everyone wary of how quickly it can strike when given an opening.

2. OKC Energy FC (Previous: 6)
Last Week: W 3-0 vs. Tulsa Roughnecks FC
While the Galaxy II are getting it done in the attacking third, Energy FC’s defense has clamped down hard on opponents during a three-game winning streak that has the side nicely poised to take advantage of its two games in hand. Goalkeeper Cody Laurendi’s goals-against average is down to 0.73 after a 3-0 victory in the Black Gold Derby, as the side has recorded four shutouts in its last five games.

3. New York Red Bulls II (Previous: 1)
Last Week: W 2-1 at FC Cincinnati; L 3-2 vs. Charleston Battery
There’s a balancing act here, clearly, after the Red Bulls II first defeated the third-place side on the road on Wednesday night, and then fell to the fourth-place side on Saturday as it appeared to run out of gas a little after a tough two-week stretch. Holding the inside track to first place should it take advantage of its game in hand on Louisville, Coach John Wolyniec’s side will get a good test from Richmond this Saturday.

4. FC Cincinnati (Previous: 5)
Last Week: L 2-1 vs. New York Red Bulls II; W 2-0  vs. Louisville City FC
As with the Red Bulls II, we have a similar conundrum with Cincinnati, which let a lead slip against New York before breaking Louisville’s 17-game undefeated streak on Saturday. FCC’s resiliency in taking a victory after each of its four defeats this season is impressive, and while the side will be kicking itself for not having swept last week’s games, another big test arrives with Charleston’s visit on Saturday.

5. Louisville City FC (Previous: 2)
Last Week: L 2-0 at FC Cincinnati
Louisville’s 17-game undefeated streak came to an end, and with the Red Bulls II’s loss to Charleston the defeat to Cincinnati might sting a little bit more as the chance to create separation at the top of the Eastern Conference went awry. City will want to get back to winning ways next week at home to Orlando, but August 19’s game on the road against the Red Bulls II is now homing into view as one of the biggest of the season.

6. Charleston Battery (Previous: 7)
Last Week: W 3-2 at New York Red Bulls II
Charleston has become quite the road warrior of late, with victories in four of its past five games away from MUSC Health Stadium after a victory against the Red Bulls II on Saturday. Another massive test arrives on Saturday as Cincinnati hosts the Battery, who took a dramatic win against the expansion side during the opening weekend of the season. Third place is there for the taking if Charleston’s counter-attacking game can find its rhythm.

7. Rio Grande Valley FC (Previous: 8)
Last Week: Bye
The Toros got to sit and watch, and remain exactly where they were at the start of the week as results definitely went their way over the weekend. Back-to-back tests come next as Sacramento Republic FC and OKC Energy FC both visit south Texas in the next two Saturdays, which gives the side a big chance to make a move up the standings.

8. Vancouver Whitecaps FC 2 (Previous: NR)
Last Week: Win 2-1 vs. Sacramento Republic FC
Vancouver’s return home proved to be exactly what it needed to get back on track, although Thomas Sanner’s goal arrived awfully late to pull three points out of the fire against Republic FC. Now WFC2 will get another top-three showdown on Friday night as it visits Colorado Springs Switchbacks FC in one of the big games in Week 19 of the regular season.

9. Richmond Kickers
Last Week: W 3-0 vs. Toronto FC II
The Kickers have three wins in a row, and a firm grip on a place in the playoffs as multiple teams below them managed to draw and give the Kickers the chance to build a nicer cushion in sixth place in the East. The Red Bulls II visit City Stadium next, but after the Kickers’ late equalizer at Red Bull Arena earlier this season, Saturday’s game should prove a compelling one in a slightly underrated rivalry.

10. Seattle Sounders FC 2 (Previous: NR)
Last Week: W 1-0 vs. Portland Timbers 2
Seattle jumps into the Top 10 for the first time this season thanks to a three-game winning streak that has stealthily moved the side back into the playoff picture. One of the more underwhelming sides early in the season, S2 is starting to live up to its potential on paper, which could make for a very interesting stretch run at Starfire Stadium.