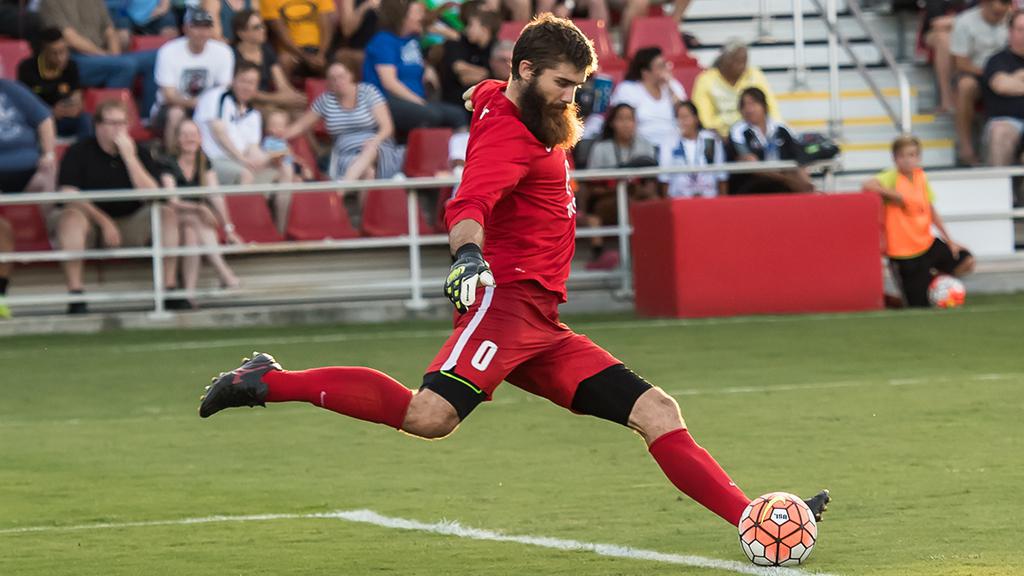 SAN ANTONIO – Stepping in for just his second start for San Antonio FC on Saturday night, goalkeeper Matt Cardone was faced with a big test early when Vancouver Whitecaps FC 2 was awarded a penalty kick after Marco Bustos was fouled on a free kick.

The 23-year-old more than passed, as a diving stop to his right kept the game scoreless and paved the way for a 2-0 victory for the hosts at Toyota Field.

“It was a big moment in the game,” said San Antonio Coach Darren Powell after the game. “We’ve said it before and we’ll say it again, goals change games. Matt has that moment and he has to make a decision on the penalty save and it was a fantastic save. I think that gives him confidence and I thought he gave a good, solid, calm performance.”

The save ended up as the only one Cardone had to make, as the miss appeared to take the wind out of Vancouver’s sails, which allowed San Antonio to take firm control of the contest the remainder of the way. Now on a six-game undefeated streak, the victory moved San Antonio into seventh place in the Western Conference standings with games in hand on the three teams below them.

Filling in for the suspended Josh Ford, Cardone had only made one start previously for SAFC in a 3-2 defeat to Rio Grande Valley FC back in May. With two more starts to come as Ford sits out, the win provided a big confidence boost for Cardone, and the team as a whole.

“It was a great win,” Cardone said. “It’s really great to be part of such a good team effort. We’re only getting better and there’s a lot of the season left to go. It’s great to build some confidence. Our team has been on a good streak so far and we want to continue that for the rest of the season.”

While Cardone put in a composed performance in goal, Saturday night’s clash also saw the debut for the club for Cesar Elizondo, the latest in a series of mid-season signings designed to help SAFC’s push for the playoffs. A former member of the San Antonio Scorpions, Elizondo came on as a second-half substitute, and was excited to be back in the Alamo City.

“I’m so glad to be back [in San Antonio],” Elizondo said. “I’m glad to be back with the people, to be part of this organization, it’s awesome, and the guys have all welcomed me really well. I got along with them very quickly, and I just need a couple of days training with them to get into the mood and into the rhythm to play even better.”

San Antonio closes out its three-game home stand this Saturday night with another challenging contest against the second-place LA Galaxy II, who come in on an eight-game undefeated streak of their own. With the way the team has progressed in recent weeks, however, Cardone is confident the side can continue its upward ascent.

“I think our quality is starting to come out,” Cardone said. “We’ve been growing this whole year and now we’re starting to show up on the field. It can only go up from here.”