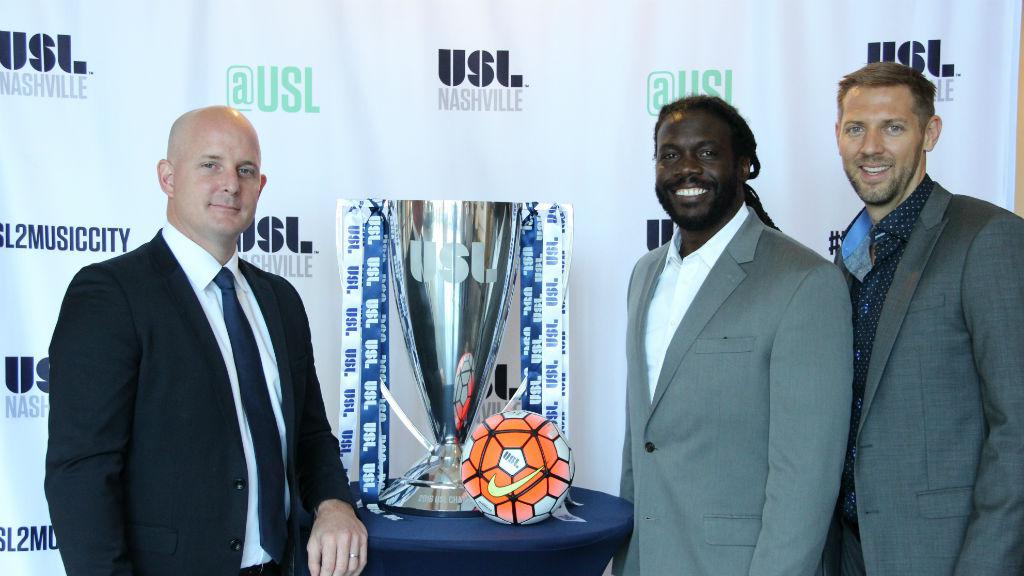 NASHVILLE, Tenn. – The United Soccer League formally welcomed its new Nashville franchise to the league today in a downtown public celebration that included Nashville Mayor Megan Barry and the team’s ownership group. The franchise revealed that the team would be known as Nashville FC and would immediately begin accepting ticket deposits for its inaugural 2018 campaign.

“We couldn’t be more excited about the enthusiasm and momentum we are witnessing here in Nashville,” said Alec Papadakis, chief executive officer of the USL. ”We are proud to officially welcome Nashville FC to the USL and even prouder of the commitment we have seen from the ownership group, Mayor Barry, the Nashville City Council and the area’s many soccer supporters.”

The new Nashville FC USL team approached the amateur, supporter-owned club about acquiring the Nashville FC brand after announcing in May they had been awarded a USL franchise. The club’s members voted overwhelmingly to approve the brand purchase in exchange for a 1 percent equity stake in the USL team and a voting seat on its board.

“We have had a remarkable past few weeks since announcing our plans to join the USL,” Dill said. “We are very pleased to have the USL with us today as well as Mayor Barry as we share two significant milestones – our Nashville FC name and ticketing plans – with the Nashville community.”

The Nashville FC crest features the blue and gold colors of the Metro Nashville city seal with the overall shape and formation of the circular “N” along with a small center circle representing a spinning record, paying respect to Nashville’s “Music City” heritage. The fleur-de-lis also comes from the city seal, and the circle band encompassing the logo features a “divide” that represents the numerous Civil War battles that took place in the region.

During today’s event, Nashville FC announced that its ticket deposit plan will include the following:

Deposits are being accepted exclusively on the team’s new website at www.NashvilleFC.com, which immediately becomes a part of the USL Digital Network.

Nashville Predators President and CEO Sean Henry was on hand to promote the growing relationship between the two clubs, and Barry remarked on soccer’s incredible growth in Nashville.

“The Metro Council just passed a budget that includes $6 million for new recreational soccer fields, and now we have a professional soccer team that will bear Nashville’s name,” Barry said. “Soccer’s growth in Nashville reflects our growth as a city and the diverse, vibrant communities that will make us a premier city for soccer in the Southeast.”

Nashville FC will be part of the USL’s national footprint that features a schedule focused on building regional rivalries that for Nashville supporters will include USL teams in St. Louis, Louisville, Charlotte and Cincinnati.

The Nashville FC franchise will make more announcements in the months ahead of its 2018 inaugural season, including updates on facilities, personnel and community outreach.

Note to Media:
Further information, logos, graphics and photos for download will be available at USLSoccer.com: http://www.uslsoccer.com/media-resources