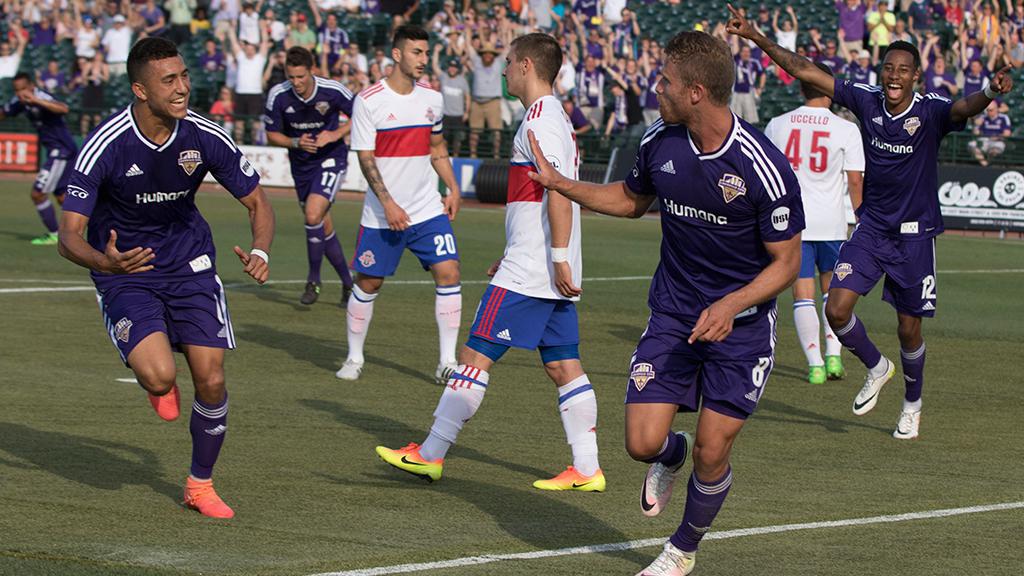 Saturday evening brings the midway point of the USL regular season, but if you look at the league standings the variation in games played for teams through 14 weeks is definitely distinct.

At one end of the spectrum, you have Toronto FC II, which has already played 17 of its 30 regular season contests. At the other, there are teams like OKC Energy FC, which has still got 18 games to go in its pursuit of a place in the playoffs.

Energy FC took a point on Saturday in one of the weekend’s big games, and can take solace in the fact that it not only didn’t lose ground on the front-runners in the West, but also saw other teams in a similar state – like Colorado Springs, for example – falter.

Those three games in hand Energy FC holds on Vancouver, or two games in hand in the case of the Switchbacks, are nice to project forward as wins. But would you rather be sitting with the points in the bank, or the potential for points to come? There’s pressure in making the games you have to take advantage of county, which arguably makes positions like Vancouver or Louisville’s preferable to those looking to gain ground as the second half kicks off.

1. Louisville City FC (Previous: 1)
Last Week: W 4-1 vs. Toronto FC II; D 0-0 vs. FC Cincinnati
Louisville left the door slightly ajar for the New York Red Bulls II, who could conceivably move into first place with wins in their two games in hand, but as we mentioned above it is typically better to have points in the pocket than to be relying on future performances. As it was, Louisville’s two performances this week were both good ones, and the side could easily have given itself a good chance to beat Cincinnati on Saturday if not for an excellent performance by Mitch Hildebrandt and the FCC defense in the first half at Slugger Field.

2. New York Red Bulls II (Previous: 5)
Last Week: W 4-0 vs. Wilmington Hammerheads FC
The Red Bulls II got back to their best on Sunday afternoon against a solid Wilmington side, and kept the gap to Louisville manageable thanks to the conference leader’s draw with Cincinnati. Getting the team’s defensive solidity back was a key for Coach John Wolyniec, and when that part is in place, the side is difficult to beat. When the attack is flying the way it was late on Sunday, though, it makes it nigh-on impossible.

3. Sacramento Republic FC (Previous: 2)
Last Week: D 1-1 at Arizona United SC
Sacramento extended its undefeated streak to eight games on Saturday night thanks to Mackenzie Pridham’s late equalizer against Arizona, but while the goal came at the moment when the side was pushing everything forward in attack, Sacramento certainly deserved a share of the points against a United side that is improving every week. With Vancouver also being held to a point, Coach Paul Buckle’s side remains in good position among the contenders out west.

4. FC Cincinnati (Previous: 3)
Last Week: D 0-0 at Louisville City FC
Cincinnati’s nine-game undefeated streak could have come to an end on Saturday in Louisville, but thanks to a strong rearguard action led by Harrison Delbridge and Pat McMahon, and a great performance by Mitch Hildebrandt, the side was able to emerge with a point from the River Cities Derby. Now a home game with Bethlehem Steel FC awaits, and the chance to try and notch its second win against its fellow expansion side.

5. Vancouver Whitecaps FC 2 (Previous: 4)
Last Week: D 1-1 at OKC Energy FC
WFC2 took a point from a tough trip to Oklahoma City, and will probably be happy with that in the long run. Given the other results this weekend, though, there might be a twinge of disappointment the side couldn’t hold its lead, or find a second goal after Coy Craft’s first half stoppage-time equalizer for Energy FC, to take advantage of missteps by those around them at the top of the Western Conference.

6. LA Galaxy II (Previous: 10)
Last Week: W 2-0 vs. Tulsa Roughnecks FC
One team that did take advantage of others’ missteps over the course of the week was the Galaxy II, who moved back into second place with a comprehensive win against the Roughnecks. Most notably, the side didn’t appear to miss a beat in attack with the absence of Jack McBean, while goalkeeper Bennett Sneddon’s first shutout will give the 19-year-old a nice confidence boost. Only three starts into his career, Sneddon could need to be relied upon for Los Dos as the season goes on, including in this Saturday’s I-405 Derby against Orange County.

7. OKC Energy FC (Previous: 7)
Last Week: D 1-1 vs. Vancouver Whitecaps FC 2
A draw at home isn’t particularly exciting, but against the team leading the conference it’s probably adequate to Energy FC’s needs as it remains lurking in the Western Conference standings. Another big game arrives this weekend with the visit of Rio Grande Valley FC, and after the Toros’ loss on Sunday night, the chance to make a stride up the standings is waiting for Energy FC to seize it.

8. Charleston Battery (Previous: NR)
Last Week: W 1-0 at Toronto FC II
There was a little bit of a wobble at MUSC Health Stadium earlier this month, but the ship seems to have been righted with back-to-back wins putting the Battery just one point back of Cincinnati for third place in the East. The next two weeks will provide a big test for Charleston, though, as it squares off first with historic rivals the Richmond Kickers this Saturday, and then visits Louisville City FC on July 9 in another big Eastern clash.

9. Saint Louis FC (Previous: NR)
Last Week: W 1-0 vs. Portland Timbers 2
Saint Louis returns to the Top 10 after a good win against the Portland Timbers 2 that further solidified its place in the West’s top eight. STLFC is now 3-0-3 at home this season, and with nine home games in the second half of its season, has the chance to make a solid move into a top-four position in front of the great support the club continues to receive.

10. Orlando City B (Previous NR)
Last Week: W 3-1 at FC Montreal
Orlando has lost only once in its past six games, to Louisville, and has taken victory in four of those contests to move solidly into the playoff positions in the East. Things definitely seem to be coming together in the manner Coach Anthony Pulis had hoped at the start of the season, and the side is playing the type of attacking soccer the club has been known for in the past. OCB has scored 16 goals in its past seven contests, notching at least two in each outing.