Louisville back on top as showdown with Cincinnati looms 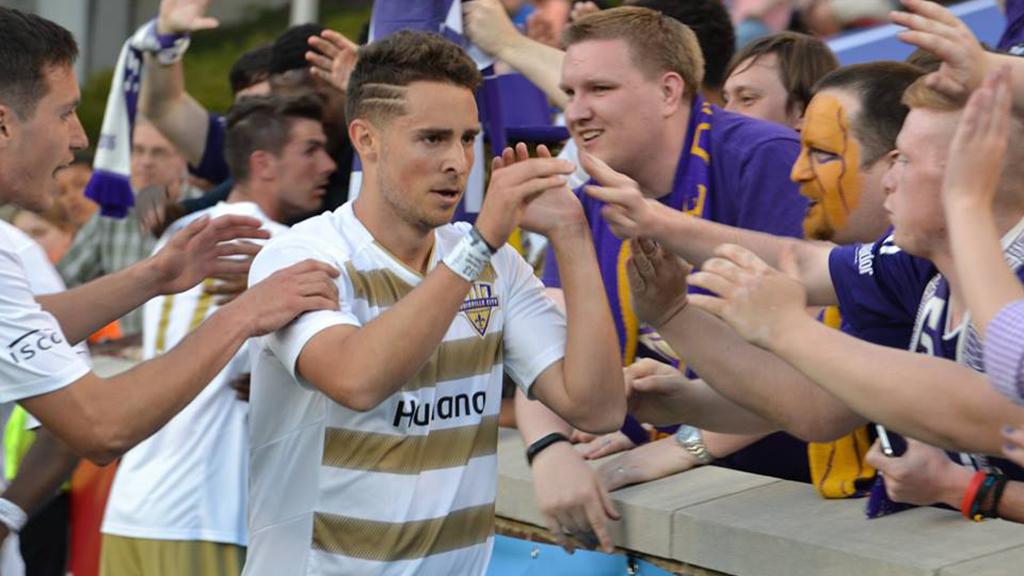 The first time Louisville City FC and FC Cincinnati played, in just the fourth week of the regular season, no one knew quite what to expect from the first meeting for the River Cities Cup.

Ten weeks later, as the two teams meet on Saturday in the USL Game of the Week on ESPN3, there might not be two teams in better form in the USL’s Eastern Conference. Louisville returns to the top spot in the USL Power Rankings this week after its road victory against Rochester snapped the Rhinos’ 24-game home undefeated streak, and extended its own current undefeated streak to 12 games. That’s the longest in the USL this season.

Cincinnati currently holds the second-longest active streak at nine games, with the team’s last setback in the league having come in that first meeting with Louisville, when Chandler Hoffman’s hat trick sent the visitors to a 3-2 victory in front of 20,497 fans at Nippert Stadium. Coach John Harkes’ side will enter as No. 3 in this week’s poll.

With a large contingent of traveling support expected, as Louisville provided in the first meeting, Saturday night’s game is setting up as a must-see.

1. Louisville City FC (Previous: 2)
Last Week: W 1-0 at Rochester Rhinos
Louisville’s victory against Rochester wasn’t only a small piece of revenge for the defeat the Rhinos handed City in last season’s Eastern Conference Championship Game, but also provided a nice mental boost in the club’s first win overall against the defending USL champions. Louisville will need to be careful not to overlook its midweek clash with Toronto, and with Coach James O’Connor in charge you’d be surprised if his players did, with the chance to put clear water between itself and the chasing pack available in the next seven days.

2. Sacramento Republic FC (Previous: 4)
Last Week: W 3-2 vs. Rio Grande Valley FC
It might have come through a slice of good fortune, but Sacramento’s victory against the Toros was a strong one against an opponent that came back at them consistently throughout the contest. With the team’s first three-game winning streak of the season now secured, Sacramento’s players can train their eyes on chasing down Vancouver at the top of the Western Conference.

3. FC Cincinnati (Previous: 5)
Last Week: W 2-1 vs. Toronto FC II
Trailing for the first time in its five-game home stand on Saturday night, Cincinnati found a very good response to come back to defeat Toronto FC II 2-1, finish the stint with a 4-0-1 record, and send its undefeated streak to nine games overall. Now the side gets a full week to prepare for Saturday, which means we should expect a big performance in one of the biggest games of the season so far against Louisville.

4. Vancouver Whitecaps FC 2 (Previous: 6)
Last Week: W 1-0 vs. Portland Timbers 2
It wasn’t the prettiest performance of the season, but WFC2’s third consecutive win against their Cascadia rival brought a valuable three points home at Thunderbird Stadium. Daniel Haber’s goal with three minutes to go was only WFC2’s second shot on target of the game, but ahead of a big trip to OKC Energy FC on Saturday, the side will take the confidence boost, and get ready for a big week of work ahead of the visit to Taft Stadium.

5. New York Red Bulls II (Previous: 1)
Last Week: D 2-2 at Orlando City B
As their streak of four consecutive 1-0 victories continued, the feeling of how much longer it could last began to emerge, and on Sunday against Orlando the dam finally burst when they conceded a late equalizer. Still, a point on the road against an improved OCB is not a bad result, and Coach John Wolyniec will likely use it as a teaching moment as the side returns home to host another improving side in Wilmington on Sunday.

6. Colorado Springs Switchbacks FC (Previous: 3)
Last Week: L 2-1 at San Antonio FC
The Switchbacks still have games in hand on the teams around them, but will likely be disappointed not to have come away with something from their clash with San Antonio FC on Saturday night. Most concerning will likely be that the attack has come up dry over the past two weeks, with Luke Vercollone’s penalty kick the team’s only tally in that span. A return home, and a rivalry clash with Real Monarchs SLC this Sunday, will offer a chance for a rebound performance.

7. OKC Energy FC (Previous: NR)
Last Week: W 3-1 at Swope Park Rangers
Energy FC dipped out of the Top 10 a week ago, but an impressive comeback sees the side vault back in ahead of a big contest against Vancouver on Saturday night. OKC has the potential to make some serious moves in the upcoming weeks, with as many as four games in hand on the teams sitting above it in the standings. A win against Vancouver could set their stall out for a run at the top two sooner rather than later.

8. Wilmington Hammerheads FC (Previous: 8)
Last Week: D 1-1 vs. Bethlehem Steel FC
Wilmington’s home draw with Bethlehem comes with somewhat of a caveat following more than 4,500 air miles over the course of the week that took the Hammerheads to Utah for the Lamar Hunt U.S. Open Cup. After going 120 minutes and a penalty shootout against Real Salt Lake, a letdown could have come about, but instead the side battled back from a first-half deficit, and could have grabbed all three points. As it stands, the Hammerheads are still undefeated in their past four league games, and nicely placed when it comes to the postseason.

9. Rio Grande Valley FC (Previous: 9)
Last Week: L 3-2 at Sacramento Republic FC
Yes, the Toros lost this past weekend, and fell two spots in the Western Conference standings, but in terms of style points it seems they definitely deserve to remain in the Top 10. The fight the side showed to twice come back at Bonney Field to get on the verge of a valuable road point, as did the manner in which they looked to get onto the front foot against one of the hotter teams in the league. A big week awaits with the visits of Arizona and Orange County on home turf.

10. LA Galaxy II (Previous: 7)
Last Week: D 2-2 at Tulsa Roughnecks FC
With the way the Galaxy II started the season, you’d probably have been surprised to find out that at the halfway point of their regular season more than half of their games had resulted in draws. The latest came on Friday in Tulsa, when Los Dos took a point for the fifth time this season after holding a lead at some point in the contest. Had they held onto only three of those leads, the Galaxy II would be at the top of the Western Conference currently, instead of fourth.